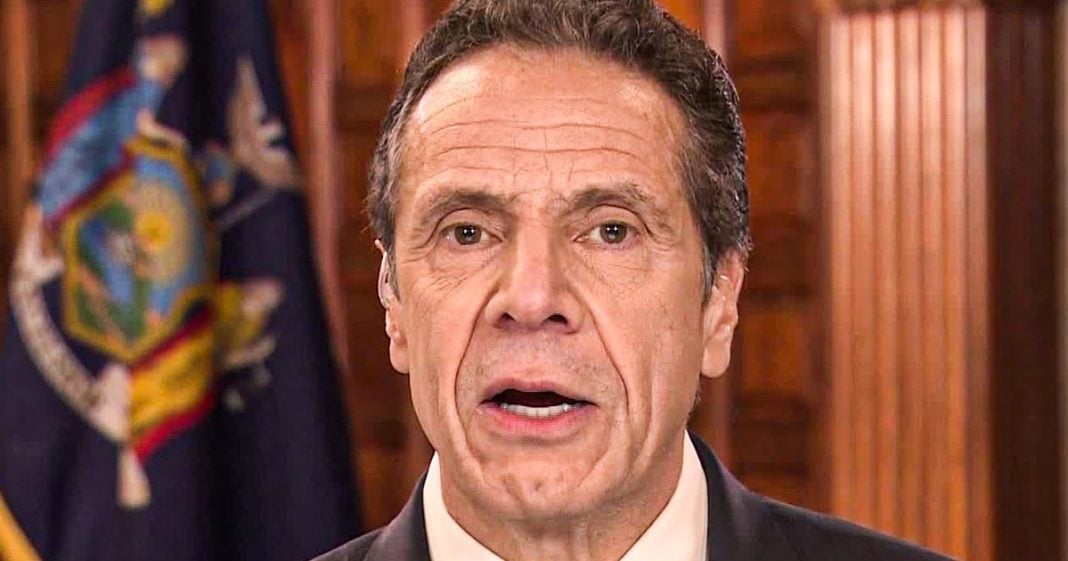 A new report by The New York Times says that New York governor Andrew Cuomo lashed out a Democratic lawmaker in the state – Ron Kim from Queens – for saying that it appeared the governor had engaged in some kind of cover up regarding last week’s bombshell report about nursing home deaths in the state. Cuomo allegedly spent 10 minutes screaming at Kim and then threatened to tarnish his reputation if he didn’t clarify his comments to the press. Cuomo is a monster and needs to be removed from office immediately, as Ring of Fire’s Farron Cousins explains.

New York state assemblyman, Ron Kim, after last week’s news broke that Cuomo had essentially, you know, we finally got the confirmation had been covering up nursing home COVID deaths in the state. Ron Kim, who had been calling Cuomo out from the beginning. He was not one of the people that was hoodwinked by Cuomo, said quote, he said, it looks like the governor was trying to dodge having any incriminating evidence. Not, not the worst statement anybody’s ever made about Cuomo. I mean, not even close to it. That’s fairly like, hey, it looks like this guy didn’t want incriminating evidence. Right? Ha ha ha. Well, apparently now, according to a new report from the New York Times, Cuomo called up assemblyman Kim, after these statements went public, according to the report, yelled at him for 10 minutes and then threatened his job. Even though again, Cuomo has no control over this guy’s job. He is an elected state official, but Cuomo threatened to tarnish his reputation to the point where he’d never get elected again, because he had the courage to speak out against Cuomo’s nursing home cover-up. That’s what we’re dealing with right now. Folks, if Donald Trump had done this to someone, do you not think this would have been probably international news at this point? Cuomo is no different.

Cuomo is just a different version of Donald Trump. He truly is. You know, powerful family. They got money and they don’t like when people get in their way and that’s what Cuomo is facing right now. And Cuomo is backed into a corner and he’s desperate. He understands that yeah, the entire country is looking at him right now and instead of how they were looking at him 10 months ago saying, wow, this guy could be the next president of the United States, they’re saying, wow, this guy needs to be shunned forever and never allowed to run for office again. His fortunes have changed that quickly and he did it to himself. He did it to himself so that he could lay the framework for his political future and people like Ron Kim weren’t afraid to call him out for it because they knew what was really happening. Even before last week’s report came out, you know, where the, the Cuomo aid said on the call like, well, hey, we didn’t know if we should tell them the real numbers or give them the fake numbers we’ve been giving everybody else.

Yeah, we already knew that was happening. This was just further confirmation of it. And again, for those of you who aren’t familiar with the little Cuomo scam and scandal that he was doing, what they did was rather than let people die in the nursing homes, they would send them off to the hospitals where they then die of COVID. And then they’d say, nope, not a nursing home death. That’s a hospital death that doesn’t count on our numbers. Now we’re going to show people how great our nursing home rate is. They would also, according to some reports, they would change the cause of death, which actually happened a lot more down here in the state of Florida. If you died of COVID, but you had an underlying condition, they would typically try to blame it on the underlying condition. So, you know, they could maybe say you weren’t a COVID death.

Either way, the big thing is shipping them to the hospitals to die so that you wouldn’t be a nursing home death. Um, Cuomo is a scumbag, like hundred percent scumbag. Shouldn’t be allowed to finish his term, but much like Donald Trump, guy’s got too much pride. He’s not going to resign. He’s going to have to be removed from office. That is what it’s going to take to get this guy gone and he deserves it. He did this to himself, and now he is threatening because he is so desperate, the very people who had the audacity to call him out from the beginning and not place him up on a pedestal, which is exactly what Cuomo wanted. Again, if you don’t see the parallels to Trump with what Cuomo’s doing here, then maybe you’re a little too blinded by your partisan politics because the two men really are one in the same.