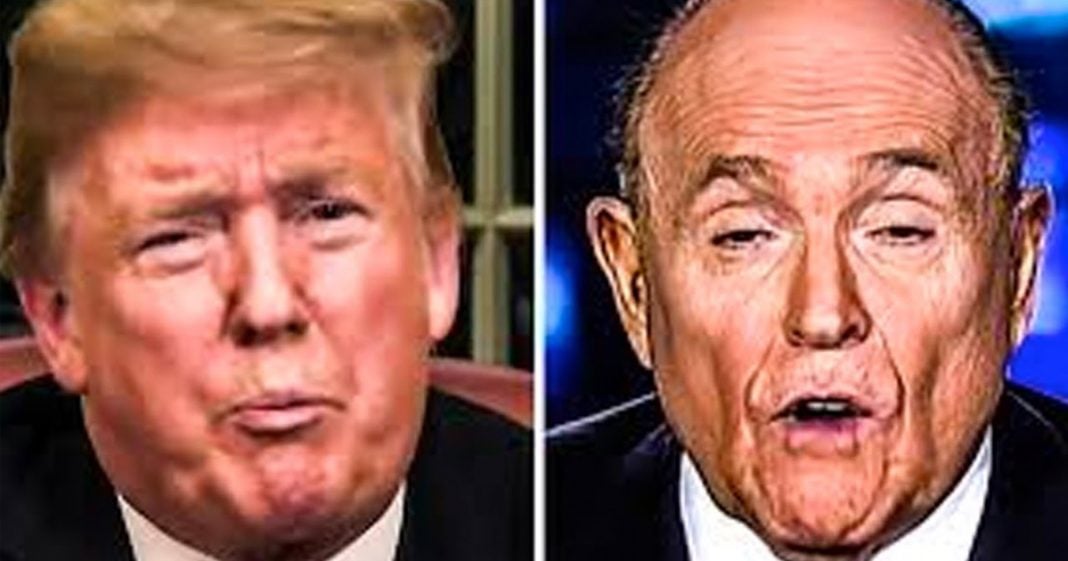 A civil rights group has filed a lawsuit against Donald Trump and Rudy Giuliani for their role in inciting the riot at the Capitol on January 6th. They are using a law that was created over a century ago to take down hate groups to go after Trump and his friends, but given today’s legal landscape, it will be a tremendous uphill battle trying to get this case through the courts. Ring of Fire’s Farron Cousins explains what’s happening.

A Democratic lawmaker and a civil rights group have filed a lawsuit in federal court against both Donald Trump and Rudy Giuliani for allegedly inciting the insurrection that took place on January 6th and of course, in order to avoid any legal issues, we always have to say allegedly, because obviously they have not been found guilty. So we cannot in fact say for certain that they did it because people always ask, why do you say allegedly we know what they did? Yeah. Yeah. We can legally get in trouble for not saying that. So just a little explainer there as to why we always have to say the word allegedly. So anyway, they’re being sued. The lawsuit is actually using the Ku Klux Klan act with, which is an 1871 law that was created to protect lawmakers while they were carrying out their constitutional duties from these individuals, these insurrectionists, rioters, if you will.

And it allowed them to prosecute them during the reconstruction era, called again, the Ku Klux Klan act. That is what they specifically cited in this lawsuit. I agree with the lawsuit. I think they have a very strong case. What I disagree with unfortunately with this lawsuit is the timing of it. The timing of this is not right. Donald Trump was just acquitted days ago, days ago, and suddenly we’re looking at the potential for double jeopardy. We don’t know as a country, how double jeopardy is going to work with a president who was acquitted in the Senate trial, if you can really even call it that. And now you’re going to try to prosecute him for that in, in a federal court. What’s the implication here? What you’re doing is you’re taking the same information that the Senate trial had and you’re using it in the federal court for something he’s technically already been acquitted for, this case is likely going to get thrown out.

Then the appeals are going to come in. It’s going to go to the Supreme Court where they’re going to challenge, you know, basically rule on the constitutionality of trying a president in federal court after they’ve been acquitted. Is that double jeopardy or is it not? What I think should happen in this instance is this lawsuit should be withdrawn for now and it should wait until after the commission is impaneled that is supposed to look at Donald Trump and everybody else’s roles in inciting the insurrection. That way you can expand it if necessary, because we all know that Trump and Giuliani were not the only individuals who spoke that day. And if you narrow it down to just those two, it does make it look like this is purely a revenge type prosecution. You have to include everybody who was involved or else it looks like you’re just cherry picking.

Like, you know what, I hate this guy and this guy, let’s just choose them. You can’t do that. You have to do every one. So wait for the panel, wait for the panel to go ahead and conduct their interviews and gather all of their evidence and then you have the entire weight of the government behind you that you can use for your lawsuit. It’s tough. Everybody wants instant gratification. Nobody wants to wait. Everybody wants accountability now. Trump us off, let’s take him down. We’re all in that same boat, but listen folks, to do it right, to do it well, to do it properly, you have to be patient. This is a great lawsuit. It’s just a horrible time to file it.