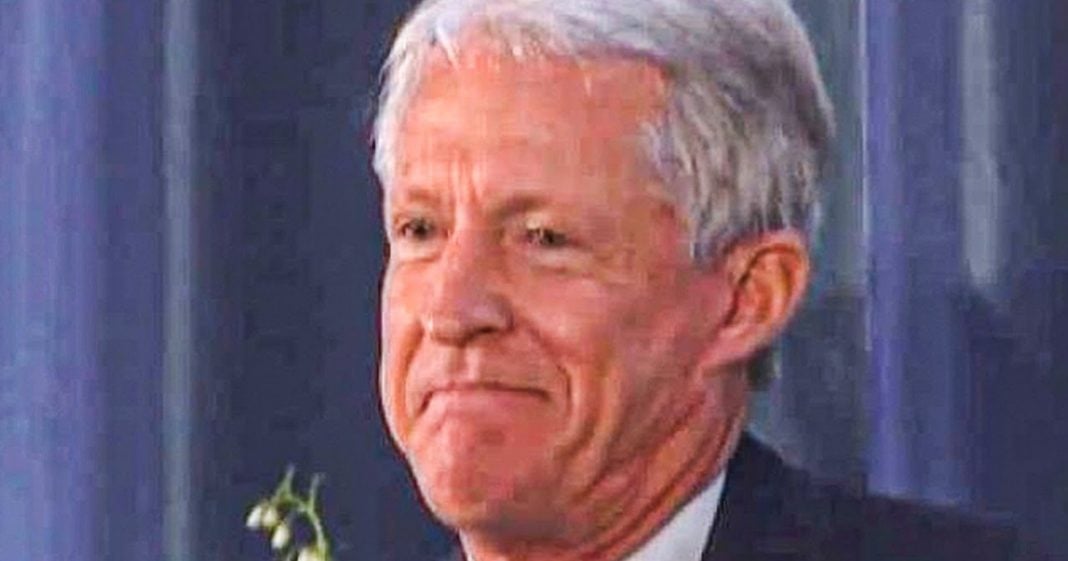 A Republican super donor named Fred Eshelman is now suing a right wing group for allegedly misleading him about what his massive donation to the group would be used for. Eshelman ended up giving more than $2 million to the group and was shocked to learn that this money that he gave to True The Vote wasn’t actually being used to fight the election results. The whole thing was a grift, and now the people who were conned are fighting back. Ring of Fire’s Farron Cousins explains what’s happening.

Late last year after the November 3rd election, a Republican donor by the name of Fred Eshelman received a phone call from the president of true the vote and the president of true the vote, according to a lawsuit now filed by Eshelman said, hey, we need a lot of money because we’re going to challenge these election results and filing a bunch of lawsuits, hiring a bunch of lawyers, takes a bunch of money. You’re a good donor. You’re a good guy. How much ya in for? And Eshelman said, put me in for two. President said, $200,000? Eshelman said no, $2 million. Then a couple of weeks later, Eshelman kicked in another $500,000. So $2.5 million this financer kicked in for these election challenges, thought, oh boy, I’m giving him two and a half million dollars. Trump’s going to be president again. Everything’s going to be great.

So why is he sueing him? Well, because it turns out true the vote didn’t actually use that money for what they said they were, just like Trump didn’t use the money for election challenges and just like the Republican party who also raised money for it, didn’t use it for that. Turns out everybody got swindled in this one, including some of the GOP’s biggest donors and now Eshelman says, well hold the hell up. You told me my money, my two and a half million, was going to be used for this. So I am essentially buying this thing that you’re promising me. And then you go ahead and you spend it on X. I didn’t buy X. I bought Y and now I want to know why you spent my money on something else and we’re going to find that out in court guys. True the votes lawyer came out and said, whoa, hold up, Mr. Eshelman.

We never said exactly what we’re going to spend your money on. And to be honest, if their lawyer is, is, you know, telling the truth on behalf of the client and they did never actually say your specific money is definitely going to be spent on X, Y, or Z, then Eshelman has no case and that’s very disappointing for Mr. Eshelman. Because I would love nothing more than to see these hardcore Republican grifters have to sit there and pay all that money back, make it rain on those Republican donors. Tuck your tail between your legs, hang your head in shame and admit, yeah, we lied to you and here’s your, here’s your money back. Because otherwise you’re going to end up with nothing but a situation like what Steve Bannon was in before he got a pardon. Oh, you said you were, you know, we raised money saying we were going to use it for this stuff, like building a border wall, but really do you see this boat I got? I love it. Thanks for the money idiots.

And that’s the message the Republican party has been sending for quite some time. That is the message that these right wing grifters send. They don’t say that, but their actions do. People fork over millions and millions of dollars every year to these Republican grifters, whether it’s people like Charlie Kirk with TP USA or Ali Alexander and whatever his latest grift is. Folks, have they done anything to change anything? Let me ask you that. Have they done anything to change anything, right? They’ve, they’ve all been around for years. They’ve raised so much money and from what I can tell, they haven’t done a thing, have they? What have they changed? What have they made more conservative? Hm? What have they given back to you for all the money you’ve sent them? Yeah, you see that’s, it’s a little suspect, isn’t it? Maybe you stop sending them money.

I don’t know. That’s my advice. That’s my financial advice of the day. Stop sending grifters money and then you won’t be in a position like Mr. Eshelman is in to have to hire high priced lawyers to try to get your money back. I do not think for a second, unfortunately, that Mr. Eshelman is going to be successful. I would love it if he was successful, because that would open the door for anybody who’s donated money to a political campaign or political cause to sue if that money is not used for what they said was going to be used for. I would love that. That needs to happen. That’s, you know, since we can’t get real campaign finance reform, that’s kind of the next best thing, but it’s not going to happen. Dude’s not getting his money back. You’re going to lose even more money hiring these lawyers. But, so are they so, you know, silver linings, I guess. Next time don’t be so gullible and stop sending money to the grifters, regardless of which side of the political aisle they happen to be on.