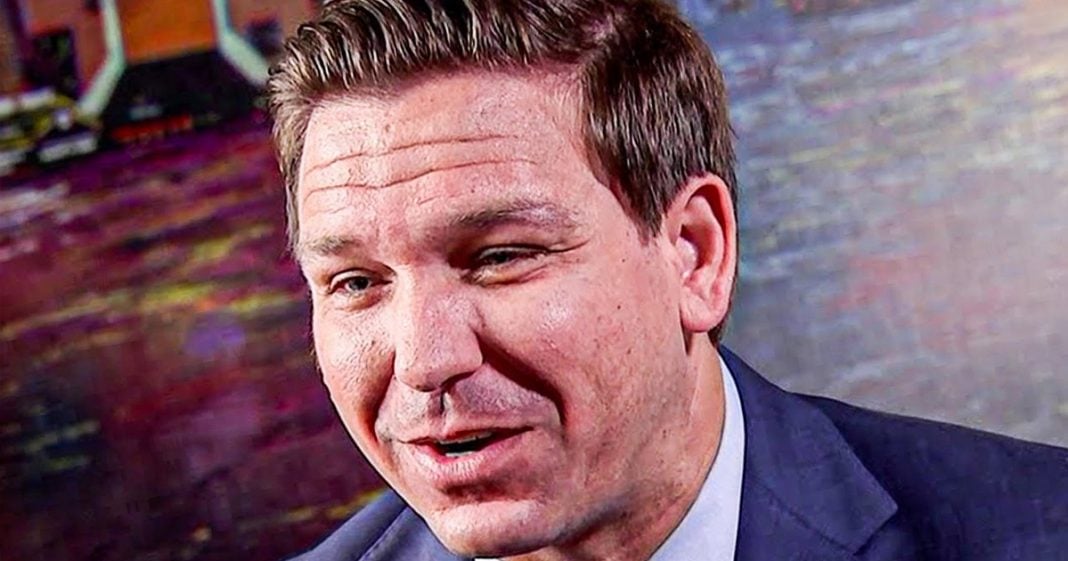 Florida’s Republican Governor Ron DeSantis proved  to America this past weekend that he truly is one of the absolute dumbest governors in the country. During an appearance on Fox News, DeSantis was asked about the new strain of COVID that is surging through his state, and he ended up deflecting the question by saying that it was happening in Blue States. Not only was that not an answer, it also erased the data that the host already presented. Ring of Fire’s Farron Cousins discusses this.

Republican Florida governor Ron DeSantis went on Fox news recently and proved to everybody in this country that he is in fact, one of the dumbest governors in America. And I know that’s really a difficult thing to pull off what with, you know, South Dakota’s governor giving him a run for his money. But I think right now, I think Ron DeSantis has really pulled ahead in that race, of course, South Dakota’s governor is currently facing a bit of an ethics violation of possibly misusing state funds for campaign purposes, but that’s a story for another day. So here’s what happened. Ron DeSantis governor of Florida who has since the beginning, from what we know, totally downplayed the pandemic and covered up the real numbers in the state. You know, basically the same thing that other governors got busted for doing and now they’re facing investigations. They’re facing calls to resign.

One of them might be facing a recall. Yet our governor down here is facing nothing except for some good publicity from Fox news. Here’s what happened. He’s talking to Maria Bartiromo, Bartiromo says quote, nearly 350 cases of the dangerous COVID variant have been reported in Florida. Is there a reason for concern? Notice how she poses it as a question like, uh, should, should people care about this? Or instead of saying like, people should probably care about this right, governor? To which the governor responds, so first off we obviously look at all the data that comes in and, but this strain is in blue States and they don’t talk about doing anything with blue States.

That’s not the end of it. It gets even dumber. But I’m, I’m gonna get to the dumber part in just a second, but let’s address this idiotic statement. So it’s rising in your state, Maria Bartiromo says. You’ve got over 350, so she’s like, here’s your data and he says it’s in blue States and they’re not doing anything. Cool. Not exactly the question she asked. Not to mention, I can promise as one of your constituents in the state of Florida, you’re doing nothing. Let me let people in our little secret here, up until just actually a couple of days ago here in the state of Florida, it was illegal for anyone under the age of 65 to even get the COVID vaccine. It was illegal thanks to an executive order signed by our governor last April, before a vaccine even existed, saying that once the vaccines rollout, no one under the age of 65 will be allowed to get a vaccine. Unless of course it is at a hospital and a hospital determines that it is, you know, this person desperately needs one.

Other than that, if it’s a pharmacy, if it’s a health clinic and you give it to somebody over the age, under the age of 65, you could face, you know, severe penalties for that. Essentially it was illegal up until a couple days ago when they loosened it a little bit and started letting people with the underlying conditions get it. I myself was lucky enough, I did get round one of it, but up until then, yeah, it would have been illegal. So that’s how Ron DeSantis is handling it down here in the state of Florida. We also know that he had a scientist fired because she was unwilling to cover up the data. Then a few months later, as we discussed here as well, they raided her home and took all her data because she was still tracking the accurate numbers. And Ron DeSantis is out there saying like, no, this is in blue States, ah, blue States, eh. How horrible are they? And yeah, we know now they’re, they’re pretty dang bad too. Just ask Cuomo, just ask Newsom. Yeah.

But see the difference is they’re actually being held accountable and Ron DeSantis is not. So anyway, the idiot continues. So we find more, you know, probably than other States do because we do a lot of analysis. It would be very odd to do a draconian travel restriction, which had no basis in the constitution at a time when all these indicators are going down. Like, what is it with Republicans and the dang constitution? Like y’all idiots don’t understand the constitution at all. You’re either mind-blowingly stupid or intentionally being obtuse about it. Like, well, it’s not in the constitution. It actually, by the way, moron, it is, it’s the 10th amendment, State’s rights. Anything not specifically in the constitution is retired to the States. That’s you, Ron. Yes, you do have the authority to issue a travel ban. And do you know how we know, not just because the 10th amendment, but because earlier last year you actually did one.

You had put a travel ban in place, you idiot. Now you’re acting like, well, we can’t do that. It’s not in the constitution. I’m just, I feel like I’m going insane. Dealing with so much stupidity from these Republicans might legitimately be driving me insane at this point because it is getting harder and harder and harder to just come out every day and just debunk the BS coming from them because it is coming fast and it is coming furious and they’re doing it all to distract from the fact that none of them know how to do their jobs because that’s, what’s at the root of all of this. DeSantis has been horrible. We’re not doing more analysis. We’re doing less. We’re covering up data. We’re closing down testing sites. I know because I live here, I see it happening every single day. You might be able to fool the Fox news audience, because most of them obviously don’t live here in Florida, but those of us that are here and we don’t have our partisan blinders on, we see exactly what you’re doing, Ron. And the only word that we can use to accurately describe you is failure.