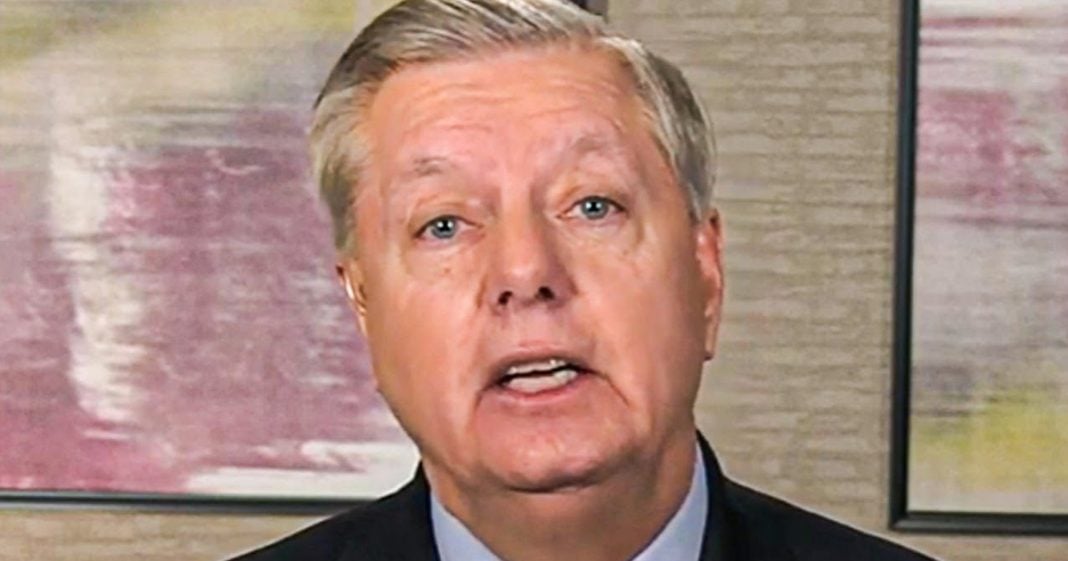 Republican Senator Lindsey Graham warned that the 2nd impeachment of Donald Trump has now set a precedent where he believes the only logical conclusion at this point is to impeachment Vice President Kamala Harris. The dog whistling is one issue, the other is that Graham and Republicans have crafted a narrative about Harris that isn’t based in reality. Ring of Fire’s Farron Cousins discusses this.

Over the weekend, Republicans in the Senate voted to not convict Donald Trump of inciting the insurrection that took place on January 6th. The president was once again acquitted of what he had been impeached for and life goes on. And then the very next day on Sunday, Lindsey Graham goes on Fox news and talks about the fact that the next impeachment might already be inevitable and that impeachment, according to Lindsey Graham, is likely to be vice president Kamala Harris. The country’s first African-American vice president, country’s first female vice president, two facts that I have no doubt play a large role in Lindsey Graham’s decision to say that she is likely to be the next one impeached because she represents two things that obviously terrify Lindsey Graham. Women, especially powerful women, but I’m willing to bet women of any kind and of course, black people, Lindsey Graham can’t handle either one of them. So here is what Lindsey Graham had to say to Chris Wallace. If you use this model, talking about the impeachment model, I don’t know how Kamala Harris doesn’t get impeached if the Republicans take over the House because she actually bailed out rioters and one of the rioters went back to the streets and broke somebody’s head open. So we’ve opened Pandora’s box here and I’m sad for the country.

He then went on to say that Donald Trump bears no responsibility for what happened on January 6th. So I don’t see how you can say that Kamala Harris bears responsibility for tweeting out a link to the Minnesota freedom fund that is used by low-income people to get bailed out of jail. So she bears responsibility for that, but Trump bears no responsibility for what happened on January 6th? Lindsey Graham is a, see I’m, I’m actually trying to do this thing now where I’m not going to, you know, use, use as much profanity. I’m really, really working on that. But my God, I hope everybody can understand exactly what I want to call Lindsey Graham right now, because he is absolutely one of the worst human beings in the United States today. He is a slimy, sleazy, disgusting, vial little critter that knows everything he is saying is a lie.

Because again, look, here’s the deal. We have seen Republicans kind of push this narrative for quite some time now, and that is they’re trying to say that Kamala Harris bailed out all these murderers who were involved in these protests. Literally could not be further from the truth and unfortunately too, by the way, in that story, that I was just reading from there, his quote is from Raw Story. Raw Story didn’t even bother to debunk that lie. Now that, that’s lazy journalism and I love Raw Story, but my God, if you’re going to tell the story, tell the whole story. That’s the problem with reporters these days, everybody is getting lazy. You know, a lot of people talking about, he wants to impeach Kamala Harris. Well go ahead and debunk the GD story folks and here it is. Over the summer, Kamala Harris did tweet out a link to the Minnesota freedom fund, which is a group set up in the state of Minnesota, much like they have groups in all 50 States that help raise money for indigent defendants so that they can use that to get bail.

So they’re not stuck sitting in jail for two months because they owe a hundred dollars. That’s what this group is for. And yes, she did that after people had been arrested in protests in Minnesota, black lives matter protesters. So she said, hey, if you want to help people, this is the organization that helps low income defendants post bail. That’s it. As for, one of them came out and killed somebody, that didn’t happen. That’s made up. I could not find because I actually did research, couldn’t find a single piece of corroborating evidence that supported what Lindsey Graham did. No, nobody had their skull cracked open. Unless of course, you’re talking about the guy in New York who the police cracked his skull open, the 75 year old man that they shoved out, and then it was announced last week they weren’t going to face charges, that dude had his skull cracked open.

Um, other than that, yeah. See that’s what happens when you go through and actually do your, do your research on stories. It makes a big difference to tell the rest of it, right, folks? And I’m disappointed in the folks who don’t take the time to go through and do that. It really doesn’t take a lot of time and it adds a whole lot of credibility to your story. And I’m in a fairly bad mood today, as most people I’m sure can tell by this point, but here is the reality. Lindsey Graham is attacking, not the president, not Joe Biden, not the white guy and this is why I’m in such a bad mood. He is attacking the African-American female vice-president over something he knows is false because as we all know, there’s nothing the Republican party hears more clearly than a dog whistle. Because that’s what this all boils down to. It is a dog whistle. Look what the black woman did. That’s what you want to say Lindsey Graham, isn’t it? Look with the black woman did. So why don’t you just drop all the pretense, Trump would have, and after all that’s your new idol. So why don’t you just say what we all know you’re thinking?