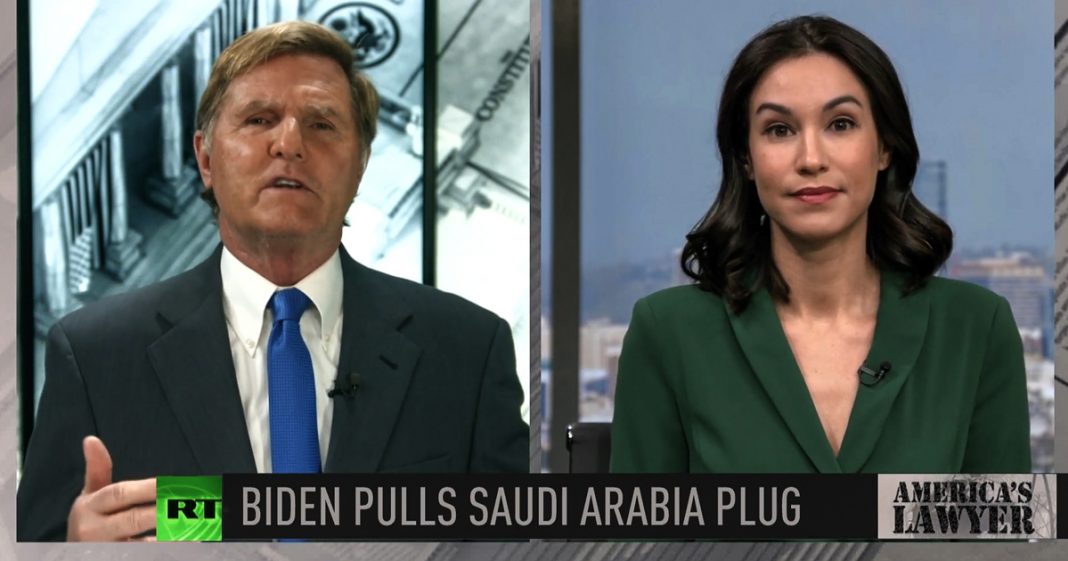 Mike Papantonio:             President Biden has announced the end of US arms sales to Saudi Arabia for the catastrophic war in Yemen. Brigida Santos joins me to talk about this story. Brigida, will the US also withdraw other support to Saudi Arabia for the war in Yemen? Other than that, it just seems like, it seems like anything Saudi Arabia has wanted under Trump, they have gotten, doesn’t make any difference what their background is. We know, we know this is, this is an awful regime. This Saudi, the Royal family is an awful regime. Just take a look at the, the movie, the Dissident. I recommend it. It’s on, it’s on Apple TV, it’s called the Dissident, gives you a real insight into how ugly the Royal family really is. What’s your take?

Brigida Santos:                   Yeah, I’ve seen the Dissident and yeah. In addition to stopping the sale of weapons, the department of defense says it’s going to stop providing all support for the war in Yemen, including intelligence and logistical assistance to the Saudi led coalition, which of course the US has been party to since 2015. Now the war started under Obama and it ramped up under Trump. Biden is now changing course pausing the sale of over $470 million in precision guided munitions to Saudi Arabia, which were approved in the final weeks of the Trump administration. Biden is also pausing the sale of F35 fighter jets and weapons to a Saudi coalition partner, the United Arab Emirates and that’s a big deal as well. Many details about Biden’s Yemen plans still remain murky, but this announcement is a big deal because since the war started nearly 75% of the weapons imported by Saudi Arabia have come directly from the United States. Riyadh is dependent on American weapons and support, and without it, the kingdom may finally be forced into those peace talks.

Mike Papantonio:             Well, I mean, we, let’s, you know, let’s be as objective as we can. We know that Yemen is at, has been a real hotspot for terrorism all over the world. We know that is a fact. But we also know that Saudi Arabia, the Royal family, the money behind Saudi Arabia has funded terrorism all over the planet, too. But so, I mean, you got to look at it with eyes wide open, and you have to look at it that the weapons industry, McDonnell Douglas, Raytheon, all the big weapons industry are making more money than they can spend. That was Trump’s big payoff to them before he left office. Saudi Arabia has waged the war in Yemen against Iran backed Houthi rebels. But, but isn’t there evidence that American made weapons have also been used to kill civilians? I mean, that’s part of the story that nobody seems to be talking about.

Brigida Santos:                   Yeah, and that’s the bottom line. There is mounting evidence that American made weapons have killed thousands of civilians. Amnesty international finds that Raytheon pave way bombs have struck hospitals, schools, and civilian houses, killing health workers, teachers, and even entire families. US weapons have also reportedly funneled to militias and people who have committed war crimes. Human rights watch has documented at least 90 illegal and deliberate Saudi led coalition airstrikes on civilians and that includes the bombings of school buses, markets, mosques, farms, bridges, and factories. Yet until now the United States has continued providing the Saudi government with the munitions and additional support that it needs to carry out this brutal campaign.

Mike Papantonio:             You know what I find interesting and, and, and, and hopeful, the Biden administration has removed the Houthis from the official government list of, of foreign terrorists. Why, why did he take that? He, it’s kind of a first step he had to take is the way I see it, but how do you see his move on that?

Brigida Santos:                   Yes, the Biden administration has removed the Houthis from the US government’s official list of foreign terrorists, because if the terrorist designation had remained in place, then international aid groups would have been barred from working with the Houthis to provide relief, and they have to work with them because the Houthis control many of the areas that aid workers need to pass through to help nearly 14 million civilians who are starving on the ground. Now blocking aid workers at this point would just kneecap the country even further. Plus the Houthis had only been designated as terrorists in the final days of the Trump presidency. So this is just a return to Washington’s prior foreign policy stance on the rebel group.

Mike Papantonio:             Yeah, and again, I can’t say this enough times, if you really want a really good inside picture about how Saudi Arabia politics are run through the Royal family, you must see the Dissident and it’s on Apple TV. I don’t have any interest in it. I’m not telling you that. It just is so, it’s so enlightening about the people that we’re doing business with, the people that we’re really calling our allies. It is a disgusting regime, and it’s a disgusting story that lets you understand how bad these folks really are. Thank you for joining me. Okay.