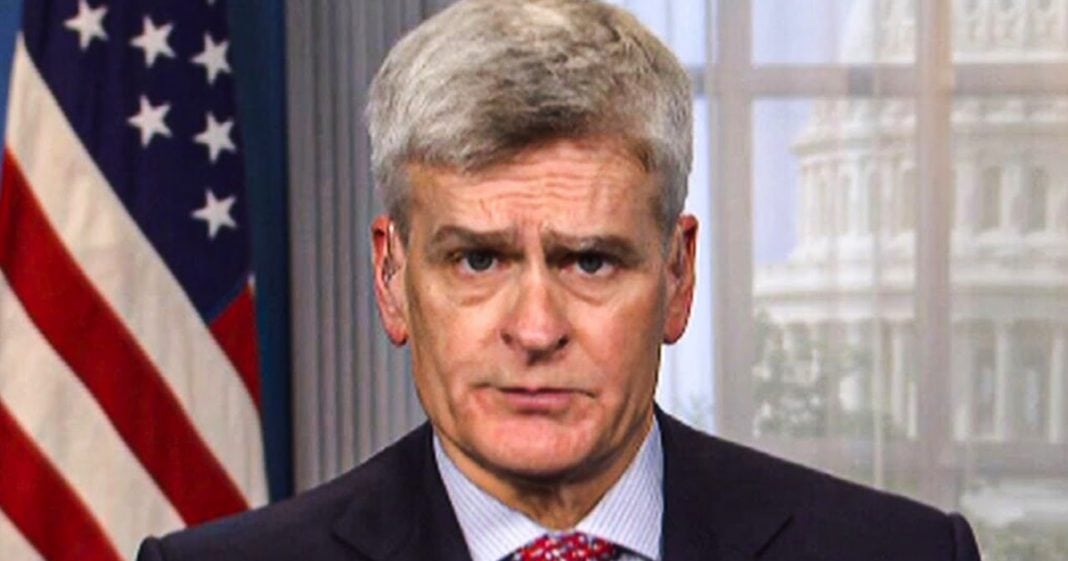 Republican Senator Bill Cassidy from Louisiana is feeling the wrath of his state Republican Party after he voted early in the week for the impeachment trial to be allowed to proceed. There is absolutely no room for dissent or independent thinking in the Republican Party, and plenty of Republicans are starting to learn that the hard way. Ring of Fire’s Farron Cousins discusses this.

There is absolutely positively, not a single centimeter available in the Republican party for dissent. You have to be all in. You have to be an automaton. You cannot have an independent thought in today’s Republican party, because if you do, they’re going to come after you and they are going to make you pay and Republican Senator Bill Cassidy found that out on February 10th of this past week. What happened? Oh, Cassidy was one of the Republicans who voted to allow the Senate impeachment trial of Donald Trump to move forward. He didn’t vote to convict Donald Trump. He just said, let’s have a trial. And because of that on February 10th, the Republican party of the state of Louisiana, Louisiana from which Bill Cassidy is their Senator, voted unanimously to censure Bill Cassidy. Here’s what they said in the resolution, this is from the resolution. We condemn Senator Cassidy’s actions in the strongest manner. He does not represent the people of this state or the Republican party. He represents himself and has joined with some of the most dishonest and disreputable forces in our country to be part of this despicable sham.

But you won’t. But you won’t because, cause you think people like Cassidy are the problem. Cassidy’s not even going to vote to convict the guy. All he said was, hey, okay. Yeah, sure. Let’s do the trial, whatever. That’s, that’s the extent of what he did. But again, there’s no room for dissent. There is no room to have a differing opinion from another Republican. And these are the folks who say that if, oh, if you don’t agree with Democrats then they just hate you. No, y’all are literally canceling members of your own party because one time out of their lives they said, well, eh, and you’re like, nope, get the hell out. You’re censured. I hate you. I hate everything you stand for. I hate everything you’ve ever done. You’re dead to me, go away. Pretty strong. But again, the more you do this because we’ve seen it in Arizona, we have seen it in Pennsylvania.

We’re watching it unfold all across the country of Republicans getting censured, just for saying things like maybe Trump wasn’t that good. Censured, gone, done and the rest of the public is looking at this, including members of your own party, saying you all have kind of gone off the deep end. I, uh, I think I’m going to go change my voter registration now. So in conclusion, Republican party please continue to censure any member that isn’t willing to worship at the alter of Donald Trump, because all it’s doing is alienating more voters and causing them to leave your stupid little party.