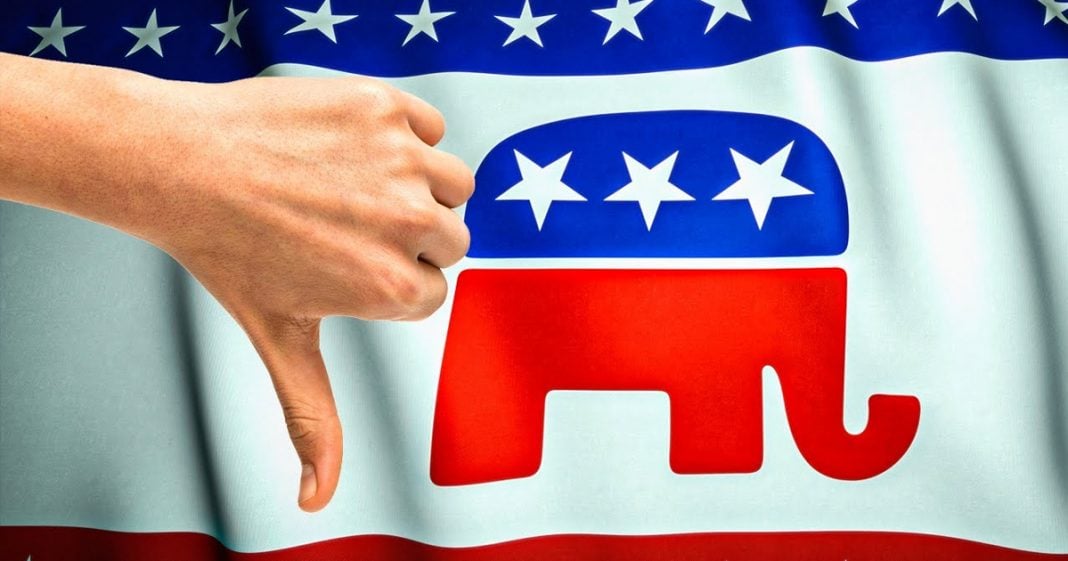 Tens of thousands of voters across the country have switched their voter registration away from Republican since the events of January 6th, and there doesn’t appear to be any kind of slowing of this mass exodus. The Republican Party is in trouble, and they are either too stubborn or too stupid to see what is going on. Ring of Fire’s Farron Cousins explains what is happening and why it has actually been brewing for many, many years.

At this point, tens of thousands of Republican voters across the country have now switched their voter registration from Republican to anything else and that has all happened since the January 6th, Republican insurrection on the Capitol. And yes, it is tens of thousands. And this is mostly happening, by the way, in swing States or States that have now become swing States, talking about places like Arizona, Colorado, Pennsylvania, you know, States that are becoming more and more in play. But not of course if everybody leaves the Republican party in those States, or at least in large enough numbers, which is what we’re seeing right now. And again, this all happened after the insurrection because that for a lot of Republicans was the last straw. And we have talked about this multiple times, but I think it’s important to point out that this wasn’t just the straw. This was the last straw, because a lot of these voters for the last 20 years in American politics here, they have watched as the Republican party has grown and morphed and changed into something that they don’t recognize anymore.

Had the insurrection taken place on its own without the events of the last 20 years happening, I don’t think we would’ve seen a single person switch their voter registration. They had watched this evolution from the Bush years, right? The war based on lies that we all now know are lies. Saddam Hussein was not involved with 9/11. Most conservatives were okay with that. Some of them, eh, started asking some questions, but they maintained their allegiance to the Republican party. Tax cuts for the wealthy during the Bush years. Oh, it’s going to trickle down to us folks. You just wait, just like it. Wait a minute. It didn’t do it with Reagan. But, but no, no, no, no. This time they’re saying it’s going to. So more Republicans start asking questions, but they stay with the Republican party.

The economic collapse, the refusal to prosecute bankers, the nonstop lies from this administration, the torture from this administration. They start asking more questions. They start looking introspectively, but ultimately decide no, I’m, I’m still a Republican. Then we head to the 2008 election, Sarah Palin. They start asking, is this really the best we have? Is this really what represents us? But they say, well, I’m still going to be a Republican. The birtherism, ah, we know he’s not really a birther. We know he’s not really a Muslim from Kenya, but I wish they wouldn’t say that, but they are. We’re going to stay with them. Then Donald Trump, all of the horrendous statements, the access Hollywood tape, paying off a porn star so she didn’t blab about their affair when his wife had just had a baby four months ago. Eh, it’s disgusting, it’s sick. But I, I guess I’m still a Republican. I don’t even know anymore. And then of course the insurrection and these people finally said, you know what, screw it.

I can’t, I can’t, I can’t keep making excuses because let’s remember something folks, party split in this country is about half and half, but that’s just party split. You got about an equal number of Republicans and Democrats is what I mean. You know what else is in there with an equal number independents. So these Republicans over here, the ones that are now leaving the party, got sick of having to justify who they are and what they believed to everybody else because they started to realize they can’t justify it. Well, I believe in this. Okay. But that’s not even actually a thing. Wait a minute. So why am I even here? That’s what happened? They looked at themselves and they looked all around them and they said, why am I here? This isn’t me. This doesn’t represent me. This doesn’t stand for anything I believe in. I’m out. And that is what we’re seeing today.