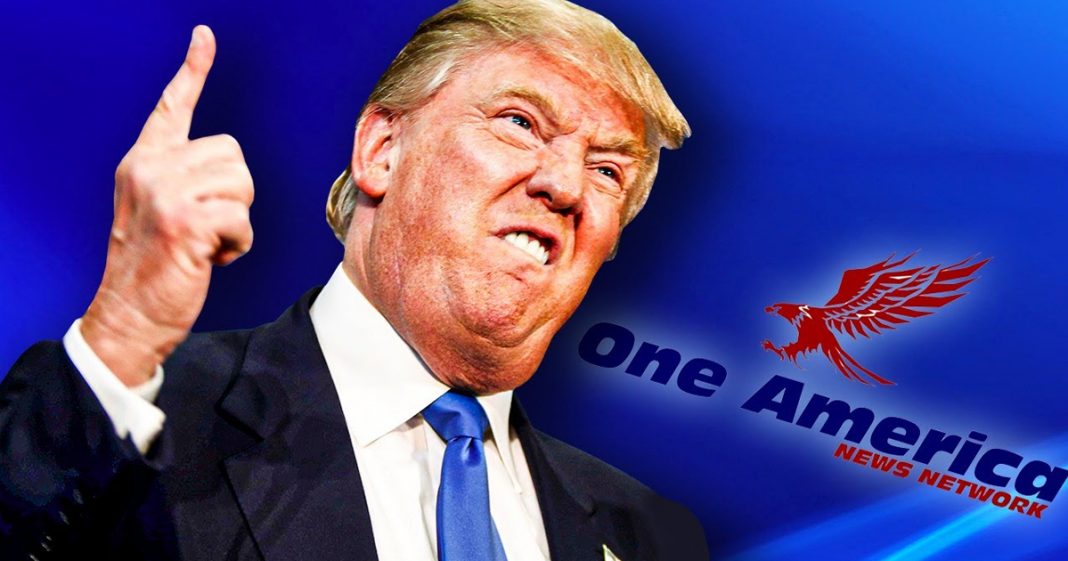 The One America News Network – OAN – is struggling to fill airtime now that Donald Trump has left office, and their ratings are starting to take a hit. This was completely predictable, as the market for hardcore, right wing news isn’t quite as big as conservatives would like to think, and it is already over saturated. Ring of Fire’s Farron Cousins explains the struggles of OAN and why it likely means that the network won’t be around for the next election cycle.

The One America News network, OAN as it’s called, which is by the way, one of Donald Trump’s new favorite news outlets, is struggling to find out who the hell they are now that Donald Trump has left office. And because they’re struggling and they don’t know who really they’re going to be, they’re losing audience, they’re losing time and they’re losing things to talk about. Politico did a deep dive into the network to talk about how they’ve been coping since Donald Trump left office and it turns out they’re not coping very well. And here’s why, and by the way, it’s exactly as I predicted would happen, except I just didn’t realize it was going to happen this quickly. And here it is, you have Fox news that is now and always has been, and forever will be the true home of conservatives in cable news. You have Newsmax that emerged as slightly more legitimate than One America, although still totally fringy and conspiratorial, but they’re the ones who have captured the Trump base because the Trump base left Fox because they’ve view Fox as traitorous. So they went to Newsmax.

So One America is now left with some bits and pieces of the Trump base, but not really enough to call themselves a network and of course, since most of their network, while Trump was in office was sitting there praising him and demonizing Democrats, they don’t really have anything to talk about anymore, other than, of course, to demonize Democrats. But at the same time, they haven’t really done anything to off conservatives yet. I know, yeah, the impeachment, but if that’s all you’re talking about all day long, you’re, you’re gonna lose your audience. And according to this Politico article, that’s, that’s what’s happening. The network is becoming redundant. The network is becoming boring and stale because they’re just saying the same things over and over again and when they’re not saying new things, as Politico points out, they’re just coming up with wild and wacky conspiracies so that nobody can even take them seriously. And that’s what I mean when I say Newsmax is more legit it’s because yes, they dabble in the conspiracies, but OAN man, they own it.

Here’s what I had predicted months ago, I had predicted that both One America and Newsmax would eventually go away. I think Newsmax has some staying power now, I really do, but One America does not. One America is not going to be able to attract advertisers. One America is not going to be able to be sustainably funded from outside wealthy Republicans, they’re going to grow bored with it. And they don’t have the viewership to stay alive, even if they do get the advertisers. Why? Because there’s an over-saturation of the market. That is exactly what I had said last time. You don’t need three cable news channels that are strictly Republican. I mean, hell folks, why do you think for so long in this country for decades in this country, we only had three total. We had CNN, MSNBC and Fox. CNBC has never garnered the audience that Fox news had, or that MSNBC has an MSNBC is still struggling. So is CNN. But those, you know, fringe business cable channels, they typically don’t do very well because you can get the same news from the other channels and It’s mostly geared towards the business-minded folks. You know, the Wall Street types. They don’t need their own television network, let alone several of them. So that’s what you get.

Then of course you have your Bloomberg TV. You have your other networks that are popping up on the streaming services. There is an over-saturation in general of news, you know, both left and right wing. Then of course you have everything on YouTube. So if you’re going to come out with this new network and you’re going to want it to look professional, you’re going to have your sets. You’re going to have your big name conservatives come out there. You better have the backing to keep this thing running without any outside money coming in for at least three years. That is what it takes in order to be successful. Trust me, I have been with a lot of different networks. I have watched a lot of different networks that have come and gone because they didn’t secure the longevity first. They thought they had a good idea, so they just ran the hell out of the gate with it and stumbled and fell and disappeared. Networks and outlets that people, oh yeah, I remember that, when they hear the name. Air America, Current TV, Go Left TV, by the way. It happens. It’s happened to conservatives, it’s happened to liberals and it’s going to continue happening. And honestly the next one is going to happen to, if this report is accurate, is going to be the One America News network.