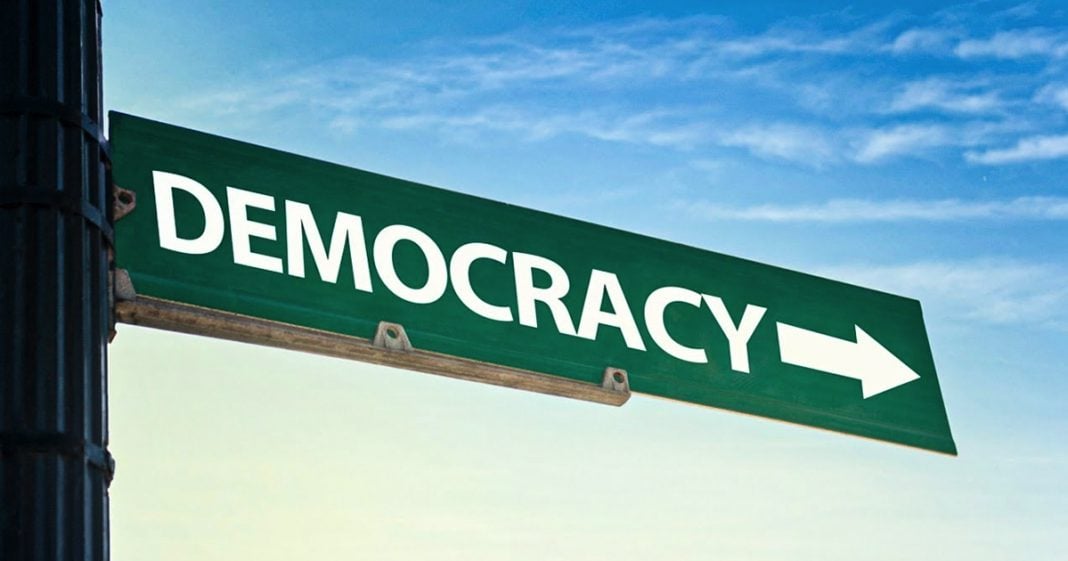 A staggeringly large number of Americans now say that Democracy doesn’t work in this country. And when you think about it, they aren’t wrong. If you aren’t a member of the Top 1% club, things haven’t worked out for you in a long time. The system is rigged against everyone not in the club in order to prevent us from ever joining that club, and it will continue to be this way until we send new people to Washington. Ring of Fire’s Farron Cousins discusses this.

According to an alarming new poll from the Associated Press, only 16% of Americans say that democracy in this country is working just fine, only 16%. Meanwhile, more than 40% say it is not working at all and a little over 30% say it’s working, kind of. So a plurality, not a majority, but a plurality say that it doesn’t work any more. I agree with the people who say that it isn’t working. And if you’re watching this video and you’re not a member of the top 1%, I have to assume you probably agree that it’s not working the way it’s supposed to. Again, for the top 1%, you’re doing better than ever. I mean, year after year after year, you do better and better and better. Everything works for you and it’s because you own the politicians. You own the think tanks, you run them, you fund them, you get them to tell politicians what you want to do.

The rest of it, not so much. I mean, we’re sitting here in the middle of a pandemic and a recession, begging politicians to not screw us over on a third stimulus check after 12 months of this. Right? That’s the situation we’re in. We’re still begging for bailouts while the wealthiest Americans have added what, a couple hundred billion dollars to their net worth, they’re doing better than ever and again, it’s because politicians don’t call the shots, the wealthy elite do. They don’t want us to succeed and that’s the bottom line. That is the hard reality that I think a lot of us have to understand at this point. What you have sent to Washington doesn’t work, Republican or Democrat, doesn’t matter. And I’m sorry I have to go this route. But if you think Nancy Pelosi is working for you, you are delusional.

If you think Chuck Schumer is, same thing. Same thing with Mitch McConnell and Kevin McCarthy or Ted Cruz and Lindsey Graham, none of those people work for the people. They’re all a big part of the club and while they may be on different sides of the club, it’s the same club and we’re not in it. AOC is outside the club, Ilhan Omar is outside the club. Bernie Sanders is mostly outside the club. Recently he’s kind of been a little bit inside with the $1,400 check thing, which again is very disappointing from him. But I think he’s still outside to be honest. But we don’t have enough of those. Like that’s why we’re able to point to these people, Ro Khanna is another one, why, that’s why we can point to these individuals saying they’re not in the club because there’s so few of them that they stand out like a sore thumb, a sore thumb that’s sore from working for the American public. But no, for the rest of us, it doesn’t work. Capitalism doesn’t work for us.

We continue to be held down by the powers that be, by the powers that be who fund the politicians who tell us, we can’t afford a minimum wage increase. Who tell us that unions are actually bad and the last time we had a strong middle-class in America is when we had strong union representation. But that all went away with the Reagan era and never came back and American labor has been under assault since then. It doesn’t work. Nothing works for us and it will continue to not work for us as long as we continue to send the same people to DC, every couple of years, that’s on us. If you want it to change, then change who you’re sending to Washington.