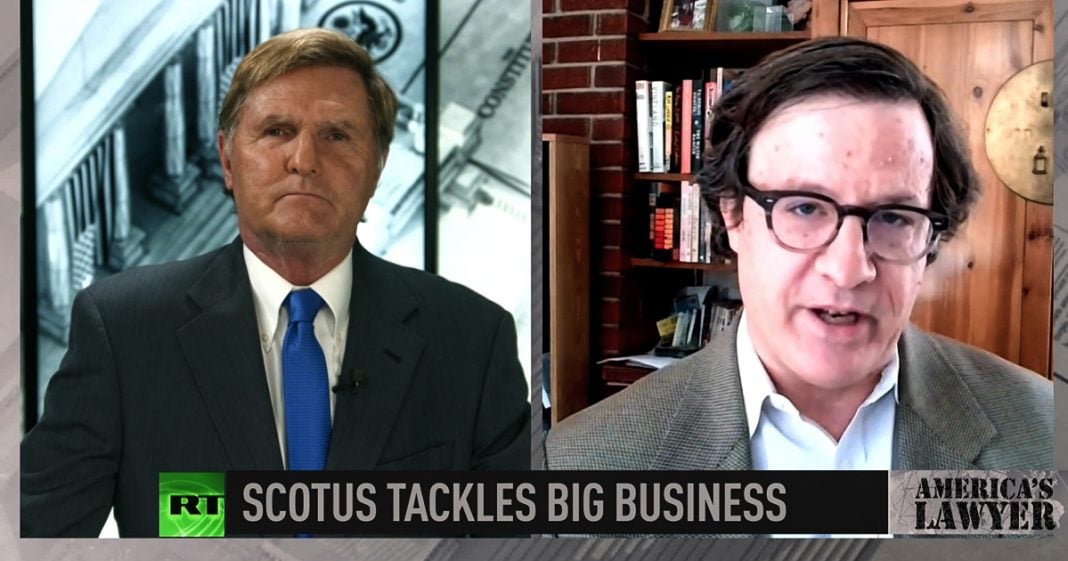 Via America’s Lawyer: Executive director of Public Justice Paul Bland joins Mike Papantonio to explain major cases on the SCOTUS docket this spring, including class-action disputes against TransUnion, antitrust allegations against the NCAA, and a review of whether Goldman Sachs is stopping misled investors from pursuing litigation. Could we soon see a regulatory U-turn to prioritize consumer rights once more?

Mike Papantonio:             Congressional hearings with CEOs from big tech have cast antitrust violations in the spotlight and the Supreme Court is about to tackle multiple other cases, which revolve around corporate accountability. Executive director, from Public Justice Paul Bland, he’s going to join me now to talk about this. First of all, Bland, Mr. Bland, the first case on the docket is against TransUnion and its, it has to do with terrorist watch list. Now from a, let’s avoid legalees, walk us through why that’s important for the average American. Okay.

Paul Bland:                            Okay. So TransUnion is a credit reporting agency. So they keep information about you and they sell it to anyone who’s thinking of giving you a loan, people who might hire you. If you try and get an apartment, you know, most landlords check your credit report. So they put in 8,500 people’s credit files that they were members of either terrorists. They were either on a terrorist watch list or drug dealers, and they were wrong for all 8,500 people. But they don’t keep records of who they sell information about you to. So what they say, what they’re arguing to the Supreme Court is that a $60 million jury verdict against them has to be thrown out because the plaintiffs could only prove that 1500 of the 8,500 people who were falsely on this list, that their information was actually sold. But TransUnion is the one who should be keeping that record, not, not the consumer. How would you know if they sold your information?

Mike Papantonio:             And what makes it so unusual, Paul, is the idea of punitive damages usually are not quantified like that. If a company’s done wrong, the punitive damages is across the board. It’s a really unusual analysis that I saw. The courts they need to, they need to rework that. They need to come up with a solution that says, A, you can’t do that and B, you’re going to be punished if you do. It’s pretty clear. Next up though, is a case against the NCAA for refusing to compensate college athletes. We’ve done this story so many times. We, we just are so down on the NCAA, and, and their position here. Talk to us a little about that and how do you see this playing out?

Paul Bland:                            So, so I mean, the argument, it’s an antitrust argument. They say these companies, these, these entities, the schools get together and they set a price and they set the price for zero for the athlete. So the schools make a lot of money. I mean, there are schools that make tens of millions of dollars off their football program and they aren’t paying the athletes. So the lower court said, well, you know, the argument that they’ve, that they were con that they were getting together and conspiring and setting prices, that’s, that depends on the facts. Let’s look into what the facts are because we just got together and we have rules for ourselves. It doesn’t matter any other facts. The only thing you need to know is that we decided that this is the right thing for the students and therefore we’re exempt from the antitrust law. So they had this really sweeping, crazy theory that would just blow a hole through the antitrust laws.

Mike Papantonio:             Hasn’t there been a, there’s been this effort year after year, Paul, to go after the NCAA, it seems like they’re almost bullet proof. I mean, case after case, where you say, A, your, your idea of saying that we’re, we, we can’t let athletes get any extra money because of the amateur protection. This, this, this theory that they’ve had, they’re trying to make it sound like it’s the high ground. Like, well, we’re giving them an education. Well, no, they’re not really giving them an education. Most of these students can’t even buy food. They’re doing everything they can just to hang on because they have to do practice. They have to do all these other parts and yeah, they may say, well, we’re not going to let you pay for a tuition and we’re going to give you a place, place to live. But when you drill down on the quality of life for these athletes, it’s pretty disturbing. This might be the first end road let’s hope. And, and finally, we’ve got a case with Goldman Sachs, attempting to stop investors from banding together. I mean, come on, what’s the motive here? Goldman Sachs, anytime you hear their name, simply follow the money and you will find corruption after corruption. Give me your take on this case.

Paul Bland:                            So this one comes out of the 2008 financial crisis and basically what they were doing is they’re selling a bunch of securities to investors and they say, these are really safe. They’re in mortgages. You know, if, if the person doesn’t pay, then we still have the house and so forth. So they knew privately internally that there was tons of fraud in the mortgage market and that a lot of these securities were in bad luck. So at the same time, they’re urging investors to buy them and they’re saying, these are great investments, they’re shorting them themselves. And they have a few select investors who they’re shorting them for, you know, selling them for less. So they know these things are not worth that much and they’re betting against their own investors. So it gets to the Supreme Court and they have two arguments, essentially. One is they’re arguing that the court shouldn’t be able to assume that, that securities markets, you know, the stock market relies on information. So that if there’s false information, each investor has to come in and like testify separately that they relied on the fake information. Then the other thing they say as well, you know, some of the statements we made that you’re saying are untrue. Like we told investors, we would always put their interests first. That’s so general you can’t sue us about it. Well, that’s crazy. How can it be so general that they can say, we will always put you first?

Mike Papantonio:             Yeah. Paul, thank you for joining me. We’re going to continue covering these stories in the Supreme Court. Let’s see how, let’s see if there’s a change. Thanks a lot.