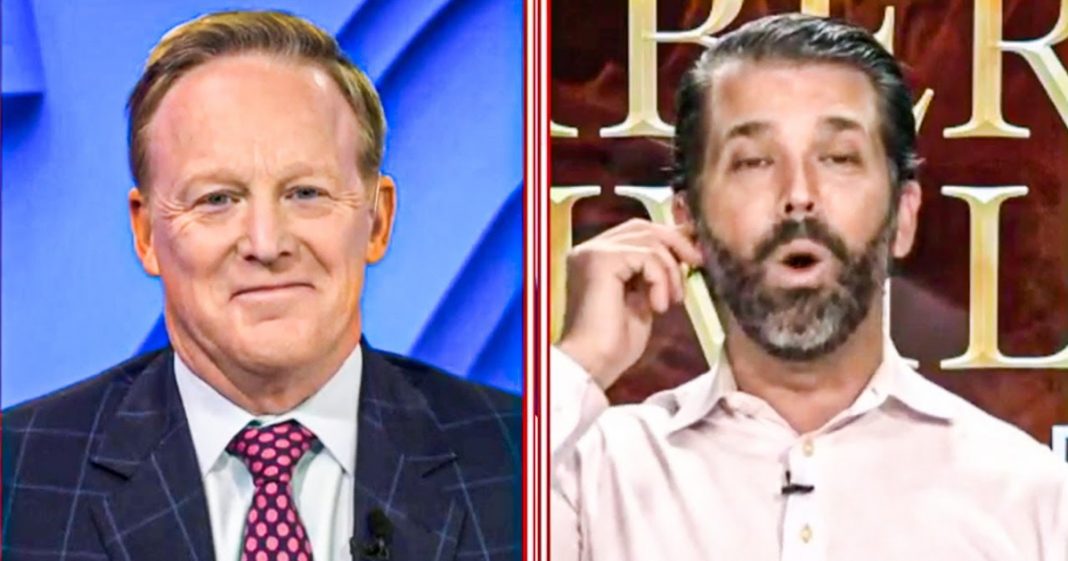 During an interview with Newsmax this week, Donald Trump, Jr. went on a tirade about how it was actually the Democrats who incited insurrections all over the country throughout the summer. Apparently this poor idiot doesn’t know what an actual “insurrection” is, and his description of what happened over the summer is grossly over-simplified. Ring of Fire’s Farron Cousins explains what’s happening.

Yesterday Donald Trump Jr. appeared on Newsmax TV to talk about the fact that who among us has not incited an insurrection at least a couple of times in life. Right? At least that was the point that Trump Jr was, was really trying to make during this bizarre little diatribe he went down when he was trying to excuse his father’s behavior by saying, hey, everybody does it. All the cool kids, I guess, are inciting insurrections. Take a look at Trump Junior’s performance here.

Lyndsay Keith:                    Uh, the House impeachment managers, just about an hour ago, showed this violent surveillance footage that is new showing Capitol rioters, uh, some of their actions, but, you know, Don, they keep showing the actions of the mob, which we have all said were horrific and not okay. But they’re not making it a case of how this directly ties back to your father. Does that bother you?

Donald Trump, Jr.:           Well, they’re not making that case because it doesn’t. Right? By that logic, we would take the last 10 months and you would take the billion dollars worth of damage in looting, in rioting, in arson, in murder that took place across the country with the BLM riots and the Antifa riots and you have the words of Kamala Harris. You have the actions of their campaigns bailing out criminals. You have the words of Maxine Waters, you’ll get up in their face. Nancy Pelosi, everyone. Again, they only want to have sort of selective memory as it relates to these things. We’ve all denounced what happened on January 6th. No one hasn’t. Okay. That doesn’t mean that then by their rules, that they would be absolved of 10 months of January 6th that happened across the entire country. Right? Federal buildings were stormed. You saw that during the, I guess it was during the Ginsburg stuff. You had stuff that happened during Kavanaugh. You had everything else, all insurrected by the Democrats and by their rhetoric on TV.

See my big takeaway from that entire clip of Donald Trump, Jr. frantically talking and sweating, because yeah, he, he really seems like he’s always at 11 possibly, I don’t know. I mean, guy seems a little too amped up for a normal person. But anyway, my big takeaway is that this dude has no idea what an insurrection actually is. What took place over the summer, you know, with these black lives matter protests and all of that, the, those weren’t insurrections, they were in fact protests and sure there was some looting, oh, oh no. People stole stuff from a nameless face, not nameless, but a faceless soulless corporation that they pay pennies on the dollar for by importing it all over here from overseas where it’s made with sweatshop labor, oh God, they lost some money. They’ll be fine. They really will. Oh, no, some places got spray painted.

Ah, that is exactly the same as putting on your big horned helmet and storming into the Capitol with the intent to kill lawmakers. Sure. Those, those two things totally interchangeable, Donald, Jr. Right? You know, spray painting the anarchy symbol on a building versus I’m going to go and, and threaten the lives of lawmakers. Totally no difference between those two, right? At least that’s what you want us to think and the idiots who watch Newsmax do. They think that, they really honest to God think that those events are interchangeable, that there’s no difference. And this is talking about the murders. Oh, you mean Kyle Rittenhouse, the Republican guy that Republicans have now lifted up on their shoulders? I don’t even know if they found him yet because he went missing. The guy shown throwing up the white power symbol in photographs with the proud boys at a bar, even though he’s only 18 years old, the guy that Republican Christians raised money for, for his legal defense. Is that the murderer you’re talking about?

This man is sick. Not just Kyle Rittenhouse, but Donald Trump, Jr. is an absolutely sick individual. But Newsmax’s audience loves that crap. They love it. They eat it up. Those hosts on there, one of them being Sean Spicer, nice to see he finally was able to find a job, they, they let him say this. They didn’t counter any of it. They loved it too. They agree with it, at least publicly. God only knows what they believe behind closed doors, but publicly they believe all these same things. These individuals are sick. These individuals I believe are too far gone. And so they’re always, as long as they’re given a microphone, going to go out there and say horrible things that stupid people are going to eat up like candy.