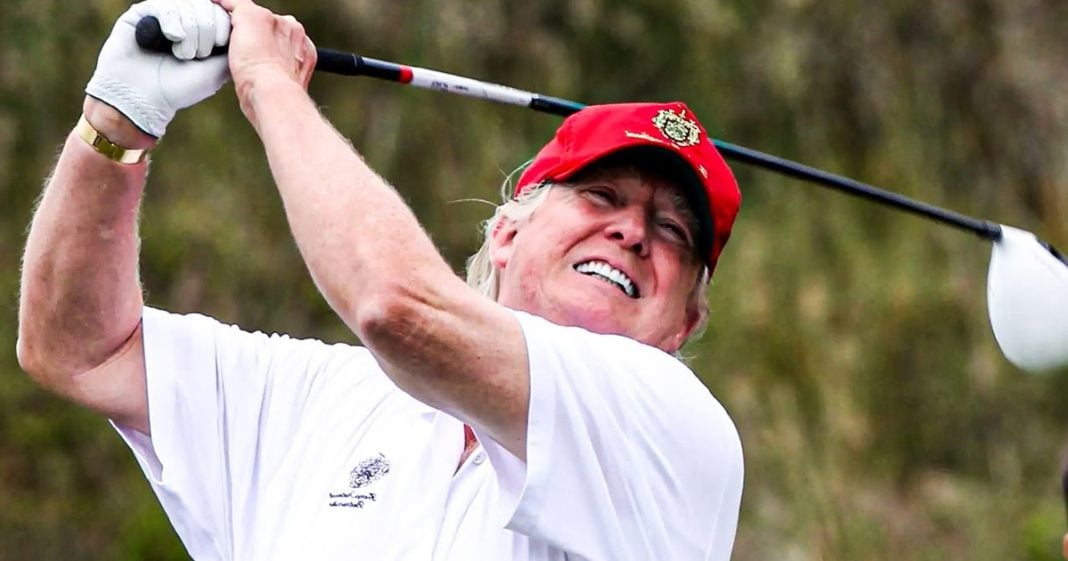 Donald Trump spent his Thursday on the golf course without a care in the world. This is likely because of the efforts of Senate Republicans who have spent the week telling him that nothing bad is going to happen to him. This was apparently enough to get him to stop screaming at his television and instead take some time to relax on the links. Ring of Fire’s Farron Cousins explains what’s happening.

Donald Trump has gone from earlier this week, allegedly screaming at his television to yesterday, caring so little about the impeachment trial that he actually went and played 18 holes of golf during the trial. Like, while it was taking place while it was being televised, the president had so, former president, had so little concern for what was going to happen, that he said, I’m going to go play golf. I’m going to go have fun. I’m going to go live my life carefree because I know I have nothing to worry about. And here’s what we know about what has happened. Obviously earlier today, we talked about the fact that you had at least three Republican senators, Cruz, Mike Lee, from Utah and Lindsey Graham, all meeting with Donald Trump’s legal team to discuss strategy. So when you have your own jurors meeting with your legal team to, to conspire together, you know that you’re not going to be convicted.

Earlier in the week, Lindsey Graham also made a personal phone call to Donald Trump and this was actually Tuesday the day after his lawyer’s ridiculously horrible performance and Lindsey Graham told him, don’t worry either they’ll get better, but even if they don’t, we’re not going to vote to convict you. So you’re okay. Tuesday was the day that Donald Trump reportedly was screaming at the television, Lindsey Graham called and calmed him down and apparently he did a very good job of calming him down because Trump was so relaxed he thought I don’t even need to watch this anymore. As much as I love to see people talking about me, as much as I love the focus to be on me, even I don’t need to deal with this. I’m gonna go play golf. I mean, I literally live on a golf course and could go at any time. So that’s why it matters that he actually did it during the trial.

Okay. It’s not like an opportunity opened up and he said, oh, it’s this or this. I got to take it. No, folks, he lives on a golf course. He lives at a golf course that he owns and he lives there. He could literally golf anytime he wanted, he could go out at midnight if he wanted, they would find the lighting to let him play golf throughout the entire night if he so choose, chooses, sorry. He chose to do it during the trial to send a message. That’s what this is about. He sent a message saying, I don’t have to worry about anything. I am effectively bulletproof so to speak on this matter. The Republicans in the Senate have done such a good job of calming me and convincing me that everything is going to be okay, that I am going to show you how little I care about the impeachment by going and playing games while you’re all out there trying to make the case that I did something wrong.