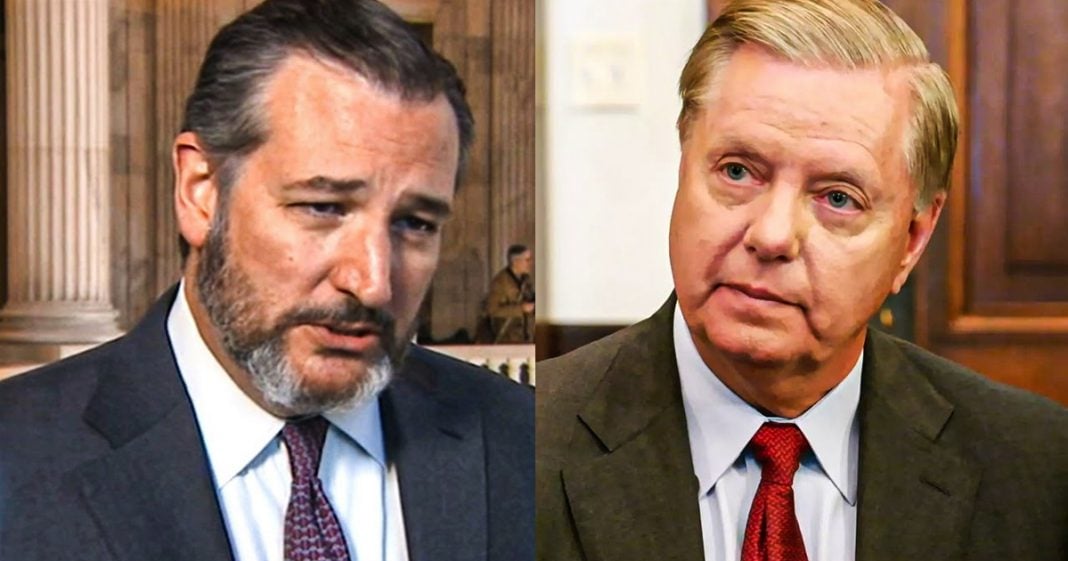 A small group of Republican Senators met with Donald Trump’s impeachment lawyers to discuss “strategy,” a move that is highly suspect and certainly unethical. These Senators are supposed to act as the jurors in the trial, and they are clearly conspiring with Trump’s own legal team to make sure that the former President gets acquitted. Ring of Fire’s Farron Cousins explains what’s happening.

It was reported yesterday evening that some Republican senators have decided that they don’t have to be impartial jurors in the Senate impeachment trial and they’re actively working with Donald Trump’s defense lawyers. Ted Cruz, Lindsey Graham and Mike Lee all met to talk strategy with Donald Trump’s impeachment lawyers as the impeachment defense team prepares to give their, you know, kind of closing, I guess you would call it, to wrap up their side of the case today. Now, these Republicans, Cruz, Graham and Lee are all going to be voting on whether or not to convict. They are in fact, by definition jurors in this trial. Now, if you were at any other trial at any other court in any part of this country, and you had your legal team go meet secretly to talk strategy with the jury, the lawyers would most likely face sanctions, possibly the loss of their licenses for jury tampering.

They would also face criminal charges for that. The jury would be dismissed and you would immediately declare a mistrial and convene a new jury, set a new trial, new lawyers, blah, blah, blah. But again, things work a little differently in an impeachment trial. Apparently everything’s made up and the rules don’t matter. Honest to God, it’s like a fricking episode of Whose Line Is It Anyway? You just make stuff up as you go, and then you get arbitrary points and then at the end, eh, nothing happens. That’s, that’s what’s happening with this impeachment trial. It, the whole thing is a farce for the Republicans. They don’t give a. Like they could not care less about what is taking place. They don’t care about the image they are projecting of, yes, we’re, we’re contaminated jurors. We’re tainted jurors. Yeah, we’re meeting with them to talk strategy.

What are you going to do about it, folks? What are you going to do about it? They’re almost taunting us at this point with it because they know well that nobody else in that Senate is going to do anything about it. We the, the, the voters, sure, if you live in their state, you could vote them out whenever they’re up for reelection again. I know Lindsey Graham alone has six years left. Ted Cruz has a couple of years for people to forget this. So, okay, then what? The Senate won’t do anything about these individuals and they should. They should, each and every one of them, be expelled from the chamber for good. They should, at the very least have their vote stripped away from them. This is an absolute abuse of justice here, a miscarriage of justice, and they’re doing it intentionally. They’re doing it openly. They’re doing it proudly because these Republicans know much like Trump himself, nobody is ever going to hold them accountable.