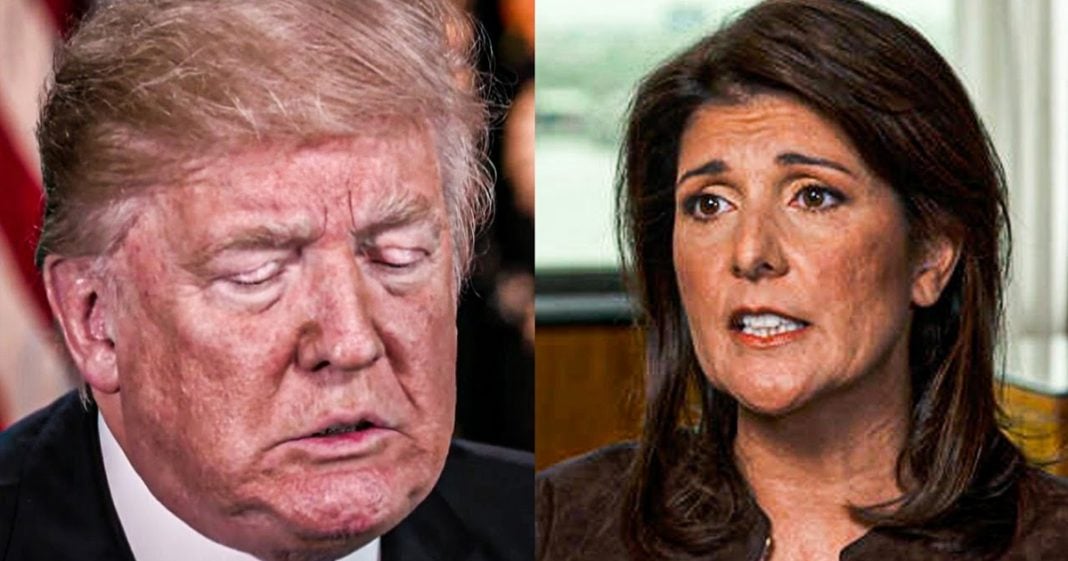 Former UN Ambassador Nikki Haley has officially turned against Donald Trump, saying that the Republicans should have never followed him. She is potentially setting up a 2024 Presidential bid, and this strategy would likely be the most popular one to assume at this moment as the public has also very clearly turned against Trump. Ring of Fire’s Farron Cousins explains what’s happening.

So Nikki Haley wanted to jump out in front of it and say, hey, I’m on the opposite side of this. I think we shouldn’t have listened to Trump because he led us down a wrong path. I’m on your side, public, that is rapidly abandoning the Republican party. I’m not one of them, perhaps you’d like me to be the leader of the Republican party? Perhaps you’d like me to be your Republican nominee in 2024? That is what’s happening here. Honestly, politically speaking, smart move by Nikki Haley, 100% absolutely smart move by Nikki Haley. See, she can come out and make these kinds of statements like, hey, we shouldn’t have listened to him. Nah, we, we, we are at fault for that. And she can say we deserve some of the blame. She was not one of the most horrible members of his administration. She still has some popularity out there. She’s not in the Senate or the House. So she doesn’t actually have to be on the record as voting for or against impeachment. So she can’t off Republicans with that.

She is in the most enviable position of all the Republicans getting ready for a 2024 presidential bid. And this statement right here is reflective of what the polls are telling us. Polls are telling us that most people in this country want Trump convicted and barred from ever holding office again, we know the Senate’s not going to do that because of the Republicans. So she’s coming out in front of that and saying, listen, I think what he did was wrong. Unfortunately, I don’t have a vote. Dang it. Oh. Oh, okay. So she gets that one. She also sees that you have tens of thousands of people over the last couple of weeks leaving the Republican party because they’re disgusted with what it has become. That statement also addresses it. I don’t like what we’ve become by following this man. So she endears herself to those individuals. As for the hardcore Trump base. What about them? Who cares?

They’re going to vote Republican anyway, folks, let’s never forget that. So they don’t have to pander to them. At this point, which I will say real quick is kind of funny because in the early days, people like Ted Cruz and Hawley thought they did have to pander to those people because they thought those people might be the ones to sit out future elections, but it turns out they should have been pandering more towards the moderate Republicans who are leaving the party in droves right now. The hardcores, they’re going nowhere. They’re always going to be Republicans, except for the ones who end up in prison for, you know, storming the Capitol. They won’t get to vote for the next Republican president. But, those moderates are leaving and Nikki Haley is swooping in trying to get them onto her side with this statement. Politically, a smart move. Just kind of shows Nikki Haley knows what she’s doing here. Somebody we need to start paying a little bit more attention to because 2024, I know it seems far away. It really is right around the corner.