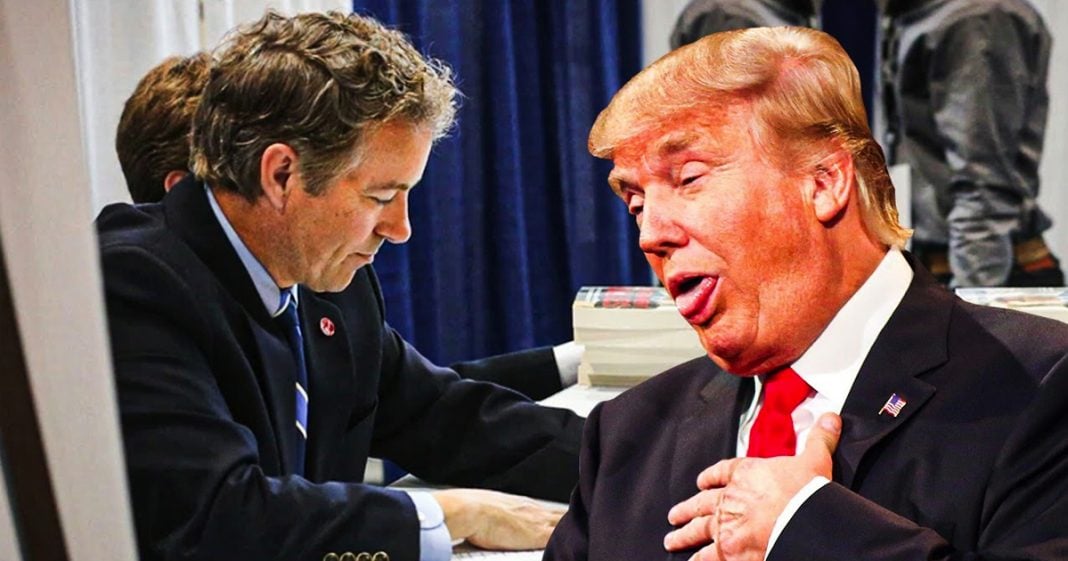 Republicans in the Senate are so disinterested in the impeachment trial that they are overseeing that several of them have been caught doing everything except for paying attention. Rand Paul was doodling on a piece of paper; Josh Hawley was relaxing with his feet up; while still other Republicans were catching up on their reading. The Democrats are doing a great job making their case, but if the jury isn’t listening then does it even matter? Ring of Fire’s Farron Cousins discusses this.

According to reports, multiple Republicans during Wednesday’s impeachment trial in the Senate, multiple Republicans decided to do anything else other than pay attention to what was happening. That includes Republican Senator Rand Paul, who allegedly was doodling and drawing a picture of the Capitol. You had Republican Senator Mike Braun from Indiana who appeared to fall asleep at certain points during the trial. Republican Senator Rick Scott from Florida studied what looked like a map of Southeast Asia and Senator Josh Hawley, who voted against the certification of the electoral college count after, after the riot, was spotted with his feet up in the back of a seat in front of him while sitting in the gallery above the Senate floor. So you got Braun sleeping. Rick Scott looking at a map of Southeast Asia for God knows what reason.

Rand Paul drawing pictures of the Capitol and Josh Hawley just up there chilling, like the slacker that sits in the back of class in college. Not really paying attention, maybe doing stuff on his phone. But Hawley swears, by the way, he swears that he was totally paying attention to everything that was happening. He was in fact studying legal briefs, he says. The point is there were arguments being made on the floor. There were very powerful arguments being made on the floor. There were powerful videos being shown of Republicans, not Democrats, Republicans running for their lives and it was smart of the Democrats to use that footage because that really speaks to them. You had Mitt Romney about to head right into the mob before the officer came and grabbed him and said, no, go this way. You had Mike Pence being escorted out because they were after them.

And these Republicans had nothing better to do than draw fun, little pictures, or look at fun, little maps and learn about geography or in the case of Braun, just straight up take a nap because you didn’t give a crap what they were saying during these impeachment proceedings. All of these individuals I have named are individuals that are 100%, no matter what evidence is revealed, they’re going to acquit Donald Trump. Donald Trump will be acquitted from this trial. Republicans are going to pay a political price for it. Trust me. But what they’re doing shows us how flawed this entire process is. The, the whole idea of impeachment these days, when you have such a divided country, yes, it can be used as a political tool. And yes, if the president’s political party has, you know, a good enough hold in the Senate or the House nothing’s ever going to come of it.

There’s going to be no way to actually hold anybody really accountable because of the way impeachment is set up. So here’s what I propose. I think the vote in the Senate has to be secret ballot, absolutely has to be secret ballot. You cannot have these people on the record because that immediately makes them feel like they have to vote with their party. Get rid of that requirement. Do not allow the guilty party to see how these individuals vote. And honestly, the public doesn’t need to know how they vote. That’s what should be happening here. But because it’s public vote, because these individuals know they’re not gonna go against their party, they’re not gonna go against their guy because they fear they’re going to pay some kind of political price for that. They’re just not going to pay attention. And then when the time comes to have that vote, all of these Republicans are going to vote to acquit Donald Trump.