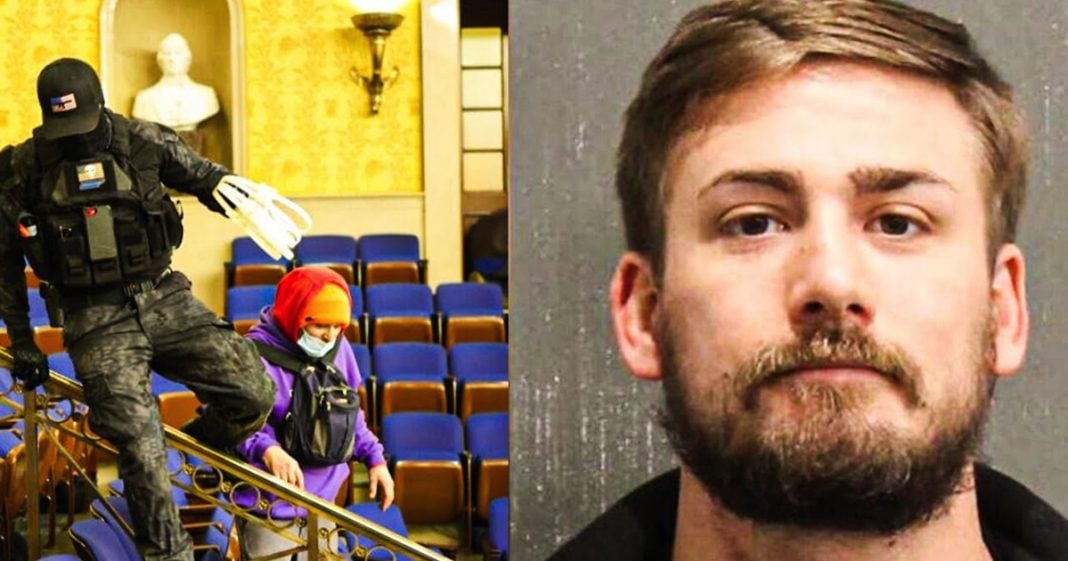 The infamous “zip tie guy” from the photos of the storming of the Capitol (his legal name is Eric Munchel) is now using the Democratic Party’s impeachment argument in his own case to say that he was inspired to storm the Capitol based on what Trump had said that day. This is a double-edged sword for Democrats. While their arguments are spot on, it DOES give the insurrectionists clearance to use them as well, thereby downplaying their own liability in the matter. Ring of Fire’s Farron Cousins discusses this.

You may not know the name, Eric Munchel, but you certainly know who he is. He is the individual seen in photographs from the storming of the Capitol, jumping over a little railing with a handful of tactical zip ties that we all know are for restraining individuals, you know, taking their hands behind their back. I know Ben Shapiro wanted to say that everybody’s got zip ties, but few people have the big giant zip ties meant for restraining human beings and they certainly don’t carry them around with them when walking through the US Capitol, Ben. Nevertheless, the dude’s name is Eric Munchel. He has been arrested and in his latest defense memo, he actually is now citing the Democrats argument for impeaching Donald Trump as defense against the charges against him. What he is saying is, you have to, here I’ll just, I’ll, I’ll read it, I guess, is the easiest way to do it.

Um, his actions can only properly be viewed in the context of Trump priming his supporters to believe that he could only lose reelection through fraud. Beginning in 2020 parts of the US government, first and foremost, the president of the United States of America told the public that the only way president Trump could lose the presidential election was if the election was rigged and that is what they’re calling the prologue of this new defense memo, by the way, that’s not even the heart of it. After president Trump lost the election, he and other government officials had the presidency or said that the presidency, excuse me, had been stolen from him by widespread election fraud. President Trump invited Americans to come to Washington, DC on January 6, 2021 for a save America rally. On the day of his rally he invited the citizens who gathered to go to the Capitol.

We’re going to walk down to the Capitol. We’re going to cheer on our brave senators and congressmen and women and we’re probably not going to be cheering so much for some of them because you’ll never take back our country with weakness. You have to show strength and you have to be strong. Trump’s statements, those are statements made by the Democrats arguing for impeachment in the Senate this week. And that is now what Munchel has put in his latest defense memo saying you can’t blame me for my actions, this guy made me do it. Lot to unpack, right? First and foremost, it’s not shocking that they’re using the Democrat’s same argument because the Democrats are making a great argument as to why Trump should be impeached. Let’s be clear. They’re putting together an amazing case. They have wonderful evidence and it definitely paints a picture and it is invoking an emotional response from members of the Senate and members of the public. And that is exactly what you want to happen.

Now for the insurrectionists and we’ve already seen it happen before Munchel came out here, but they’re now trying to argue the same thing like, oh yeah, yeah, no, no, no, no. He totally incited me. I was incited. Would not have done this except I was totally incited. That’s, that’s why it happened and let’s also not forget, by the way, that zip tie guy was in the Capitol with his mom. Like his, his mom drove him to the insurrection. So cool big, tough guy there. Right? Anyway. So they’re using this, not because they want to, you know, throw Trump under the bus. Although I think some of them are okay with that because a lot of them thought they were going to get pardons that never materialized. But what this is is it’s a way to shift the blame off themselves and these are really two unrelated issues. If Trump incited the riot, yes, he should be prosecuted for that and he should pay the price, which I firmly believe that he did incite it.

But these individuals are not off the hook just because Donald Trump incited it. Right? You still have to answer for the crimes you committed. You don’t get off just because you proved that, ha ha, he made me do it, ha. I’m just a big old idiot and now you can’t send me to jail. No we can and we will and we should, because even if you were manipulated into doing this, even if he got you riled up to do this, you still made the choice to do it. Other people in that crowd heard the same words and made the choice not to do it. It all does come down to personal choice. Donald Trump is facing accountability right now, or I should put that in air quotes, accountability right now. These individuals, whether you were incited or not, you still broke the law and trying to pin the blame on Donald Trump is not going to change the liability that you are now facing.