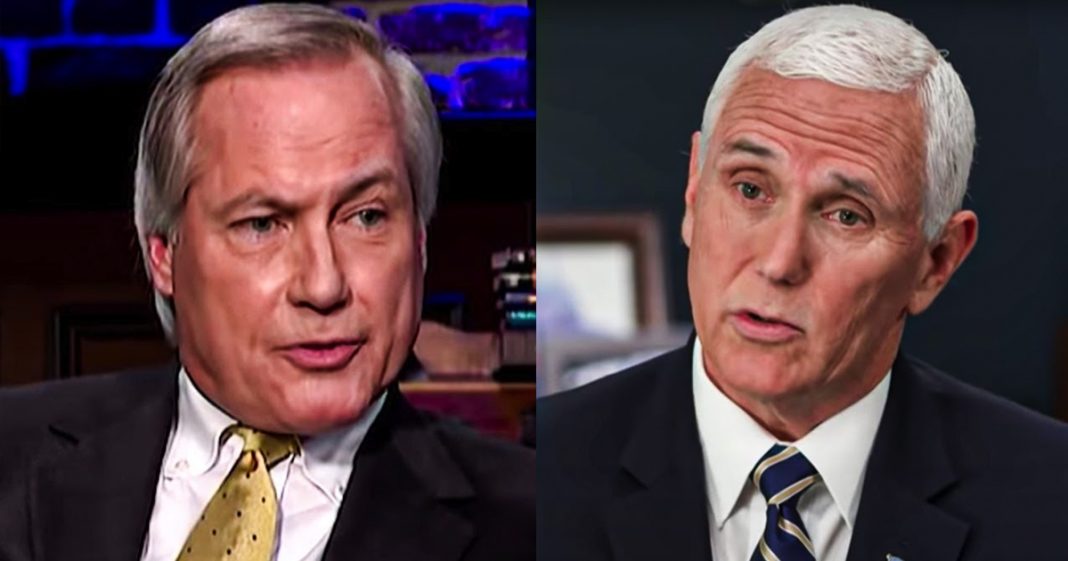 One of Donald Trump’s former lawyers – Lin Wood – is currently working as the attorney for a client suing MSNBC’s Joy Reid, but Wood can’t seem to keep his cases straight. In a filing this week, Wood claimed that he had evidence that both Mike Pence and Supreme Court Chief Justice John Roberts were somehow traitors to the United States and that he would be providing the evidence soon. He’s made these claims before without ever producing evidence, but it is exceptionally odd that he would make this filing in a totally unrelated case. Ring of Fire’s Farron Cousins explains what’s happening.

Disgraced former Trump lawyer, Lin Wood, is handling a new lawsuit against an MSNBC host and in this lawsuit this week, he filed a brief saying he can prove that not only is former vice president Mike Pence a traitor, but he thinks he can also prove that Supreme Court justice John Roberts, is also a traitor. Now, not traitors to the country, by the way, just traitors to Donald Trump is what I’m assuming based on what he said in this brief. Now, ask yourself this one, what could an MSNBC host have done that would warrant Lin Wood filing a lawsuit against them, defamation lawsuit, saying he can prove Mike Pence is a traitor? What did they say about Lin Wood? Okay. Well they, they actually didn’t say anything. This, this lawsuit is Lin Wood representing an individual who was allegedly defamed by an MSNBC host. Okay. So how does that tie into Mike Pence and John Roberts being traitors you’re wondering? It doesn’t because this lawsuit actually is against MSNBC host Joy Reid, who allegedly defamed the defendant or the plaintiff, excuse me, in this case, back in 2018.

Saying that this woman had made racist comments at a, a city council meeting or something out in California. That’s what the defamation lawsuit is about. It’s about Joy Reid, allegedly misattributing words to this woman in California. Has nothing to do with Donald Trump or Mike Pence or Don or John Roberts or the election or anything like that. But the plaintiff now recently hired Lin Wood and he filed a brief this week and he said, hey, I know this may be off topic, but I swear to God, I can prove that Mike Pence and John Roberts are traitors. It’s what he said in his filing. I hope, I hope the woman who filed this lawsuit and I have her name here. I’m not going to name her. I hope you understand you’ve hired probably one of the worst lawyers in the country.

Um, please, if you want to be successful or if you even want to be taken seriously in court, you need to ditch Lin Wood. And I’m not saying I want you to be successful against Roy Reid. I don’t have a dog in the fight at all. But I do believe in justice. So if you, if you were in fact defamed by Joy Reid who has made some really horrible comments, by the way, in the past that she’s literally never been held accountable for. She lied about being hacked. So yeah, if you want to be successful against her, if you want her to finally have a little bit accountability for, you know, kind of playing fast and loose with, fast and loose with what she says, dump Lin Wood, because literally no one in this country is going to take you seriously when your lawyer files a brief that has nothing to do with your case and instead says, I can prove that Mike Pence is a traitor. How about that?

Okay, cool. But can you, can, can you prove defamation because that’s, that’s kind of what the suit’s about and, and Mike Pence isn’t, isn’t involved in it at all. Whether or not he’s a traitor is totally irrelevant to the subject at hand and I am shocked that Lin Wood still even has a law license. Didn’t he say a couple of weeks ago that if he didn’t undergo a psych evaluation, he was going to lose his license? And I’m assuming at this point, based on this brief he has filed, he has not passed a psychological evaluation yet. If you have Lin, prove us wrong, you know, go ahead and post it so we can say that, yes, you did take it and you passed it. But, my God, man, no, this brief is off the walls and obviously off the topic too. So best of luck, I hope she fires you because if she wants any chance of even being taken seriously in court, she needs to hire herself a lawyer who hasn’t been embarrassing themselves publicly and nationally for the last few months.