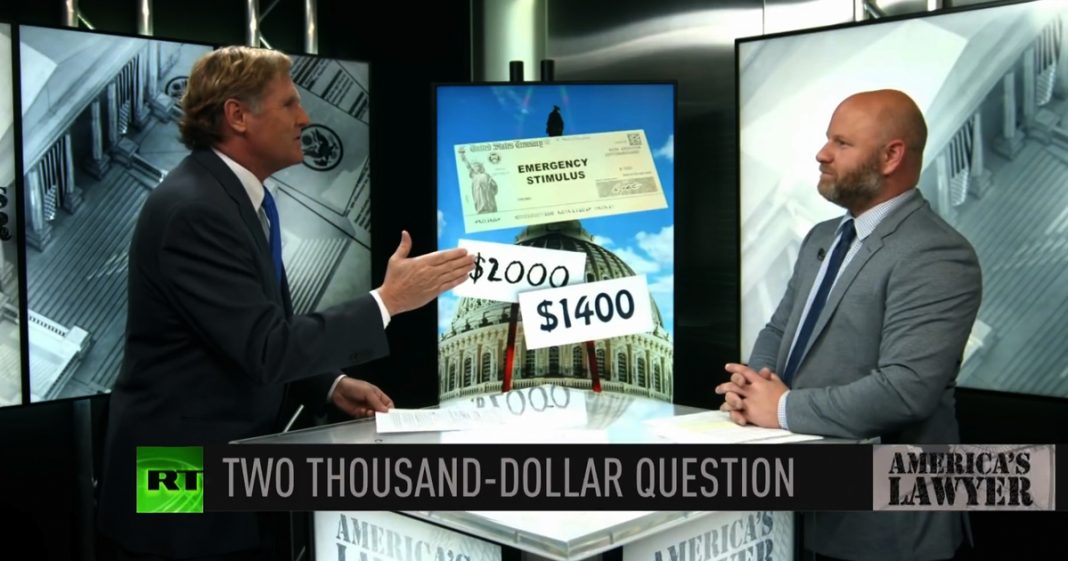 Via America’s Lawyer: Democrats remain at odds over Biden’s initial promise of $2000 stimulus checks. While some want to deliver on that promise, others are backpedaling. Mike Papantonio & Farron Cousins discuss more.

Mike Papantonio:             Democrats are already backtracking on sending out stimulus checks and this, this really, this is so dangerous, man. And Georgia, I recall during the campaign in Georgia, you had all, you had the two senators that were running. Okay. They are making promises to people in Georgia. You remember this?

Joe Biden: Because their election will put an end to the block in Washington of that $2,000 stimulus check, that money that will go out the door immediately.

Farron Cousins:                  Right. And you have a lot of these, you know, moderate liberals who are saying, no, no, no, they always meant $2000 total. So your last $600, and now you add $1400. That is not what was promised at all. They said quote, $2,000 checks out the door if you vote for these two Democrats in the state of Georgia, that is what the deal was. And then of course earlier this week, they were about to limit the eligibility on who could qualify for them. Thank God they decided against that. But you’ve got these Democrats who know they’re going it alone. Know they have no Republican support and they don’t need it to pass it and they’re still trying to argue themselves down from the promises they made to these people for no conceivable reason.

Mike Papantonio:             You got the Manchin Democrat who says, look, if we give out $2,000 checks, it’s going to look like we’re just handing out money for no good reason. We’re going to look like a welfare society. Really? Okay. So the problem is you can’t take the words back.

Mike Papantonio:             Yeah, well I’ve got, I’ve got exactly the words he said. And so the, so, you know, in the next election, that’s going to come up. Look, Biden’s doing a pretty darn good job. Okay. He really is. He’s at least if I, I can, like I’ve said before, I can maybe overlook the disgusting cabinet that he’s putting together.

Mike Papantonio:             And say, okay, I can live with that because of what he’s doing on climate change. And I’ve always said, if he delivers one thing, and that is inroads to climate change, everything’s going to be great. When he gets sidetracked like this. When some cat says, you know, Joe, I know you made the promise, but you’re going to be okay, going back on your promise. I think it’s dangerous. I think it hurts him. And I hope his closest advisors will let him know that.

Farron Cousins:                  Well, and they have to, because if Democrats backtrack on this, if they try to cut it down any more than they already have, 2022, the midterms are going to be a disaster. Republicans will get the Senate back, probably the House back. I mean, historically that is poised to happen anyway, he can prevent that if he actually delivers for the people, but scaling this back is not delivering.