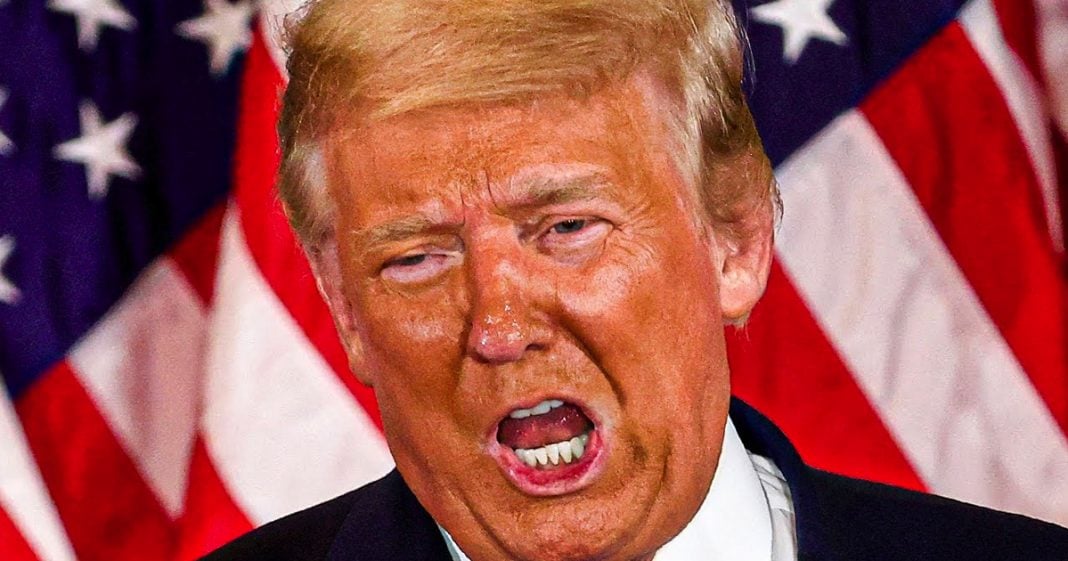 According to reports, Donald Trump was so angry about the performance of his impeachment lawyers that he spent the day screaming at his TV from his resort in Mar-a-Lago. The former President has no one to blame for this situation but himself, as he is the one who alienated his previous legal team by thinking that he was the smartest person in the room. Ring of Fire’s Farron Cousins discusses this.

According to reports, as Donald Trump’s lawyers were on the Senate floor yesterday making total fools of themselves, Donald Trump himself was down at Mar-a-Lago screaming at his television because he was so furious with his lawyers. There’s going to be a subsequent video after this when talking about the actual performance of the lawyer. So I’m not going to get too much into that right here, but I do want to point out as the report says, Donald Trump was at his Mar-a-Lago estate watching the live coverage of the Senate trial on Newsmax and the people who were closest to him say that he was screaming at the TV because he was so mad at the performance of his lawyers. Newsmax at one point, actually cut away from the live coverage to get some, some legal input from Alan Dershowitz and Dershowitz said, I have no idea what he is doing. The American people are entitled to an argument, but this just after all kinds of very strong presentations on the part of the House managers, it does not appear to me to be effective advocacy.

So even Dershowitz, who has been a staunch defender of Donald Trump, is looking at this and going, wow, I don’t know what you’re doing, but this is, this is really, really bad because the Democrats did a good job. And then you’ve got your clown car coming out here doing what they’re doing, again, I’ll get into that in the next video. But I want to say this, Donald Trump has every right to be angry that his lawyers are this incompetent. In fact, when he announced his new legal team, we, we did a segment talking about how horrible these two individuals were, even before, you know, they’d been on the job for a day and we already knew based on their history, these aren’t exactly the kind of guys who, you know, knock it out of the ballpark whenever they walk into a courtroom. Right? So this was predictable and this was expected and it’s exactly what Donald Trump deserves. Not because he’s a horrible person, mind you, he deserves it because he’s a horrible person, but that’s not the reason here. The reason here is because he is the one who drove away the competent lawyers, because he thought he was the smartest guy in the room, so he told them, remember the team of five that all abruptly quit over one weekend two weeks ago, they all quit because Trump said, you’re going to do it my way.

You’re going to walk in there and you’re going to make the legal arguments that I tell you to make even though I’m not a lawyer, I’ve never been to law school and I’m really not good at even winning lawsuits. And the lawyers said, screw this, I’m out. Best of luck to you. And he actually had an attorney on that team who had won, I think two different impeachment trials. Like this guy knows how to handle impeachment, but even he was too much because Trump told them you’re going to go in there and you’re going to make the case that the election was stolen. And they said, okay, that’s not what this is about. So we’re not going to do that. So that’s why they left. That’s why Trump has these two buffoons on the Senate floor defending him and that’s why he spent all of Tuesday screaming at his television. You know, days like yesterday kind of make me miss when he was on Twitter because man, that would have been fun to see if only for a day.