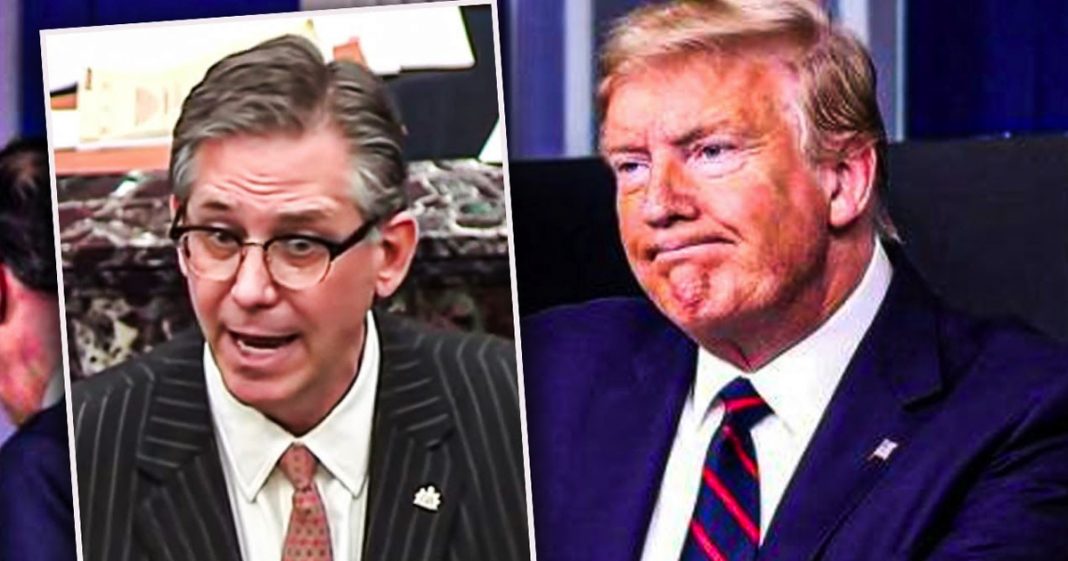 Republicans in the Senate were absolutely shocked by how incompetent Donald Trump’s impeachment lawyers were during their opening arguments on Tuesday, and plenty of legal scholars were right there to share in the confusion.  His lawyers certainly didn’t do their careers any favors with their performance, and most of the country was left scratching their heads trying to figure out what was even happening. Ring of Fire’s Farron Cousins explains what happened.

Bruce Castor and David Schoen, Donald Trump’s two impeachment defense lawyers went to the Senate floor yesterday. They laid out their case and they convinced every single person in this country, including a bunch of Republican senators, that they have no clue what the hell they’re doing. The sense from Republican senators who spoke to the media, those brave enough to speak to the media after yesterday’s events, was a sense of shock, they said. They said they were horrified by the performance of these two individual, individuals, Castor and Schoen. Collins, Cassidy, they all shared the same sentiment and it was, what did we just watch? They were rambling, they said. They were incoherent, they said. They couldn’t follow the points. They weren’t making any sense. And it’s not just those two, there were several others who joined in, you even had members of the House chiming in to talk about how bad they were.

So the question is, how bad were they folks? Well, I’m sure most of us watched it in real time. Just kind of jaw dropping stupidity, but there’s a couple things I want to point out directly because it’s just so funny. Castor specifically, Castor was the one who they’re saying is, you know, the more ami, amiable one, you know, he’s, he’s the friendly idiot is how they described him. But he went into an almost Seinfeld diatribe talking about senators. Here’s what he said. This is word for word. It’s funny. You ever notice how when you’re talking or you hear others talking about you, uh, when you’re, when you’re home in your state, they, they would say, you know, I talked to my Senator. It’s always my Senator. Why is it that we say my Senator. Now I’m not kidding. That was a word for word reading from the transcript.

And again, it sounds like Jerry Seinfeld, hey, have you ever noticed how, sorry, I can’t do a Seinfeld impression, but seriously, it’s like, why do we call them my Senator? They’re not my Senator. They’re your Senator. So that was, I guess, Castor going to the Senate floor in an impeachment trial doing his little standup tryouts. Then you had Schoen who just decided to go full bat crazy. You know, Castor wanted to be the friendly idiot. Schoen was like, move aside. I’m going out guns blazing. Look how crazy I am. I mean, the guy essentially said, if you convict the president, you’re going to have a second civil war on your hands.

Not exactly the kind of case you want to make when you’re trying to say that the president didn’t incite an insurrection, right? I mean, you kind of just dug your own grave on that one. Like, hey, you want to see people go crazy? Wait till you try to hold this guy accountable. Really bad argument, dumb. But again, as I mentioned earlier today, this is what Trump deserves. You, you alienated the good lawyers and you’re left with the crazy pile and that is essentially what these two men demonstrated on Tuesday. There was no restraint. There was no path, you know, if you, you go to law school or even pre-law classes, one of the first things they teach you is that when you’re dealing with any case, you’ve got to find that golden thread. Right? You got to weave everything together with that single thread and it all has to connect.

There was no golden thread in what they talked about yesterday. There was no thread at all. There was nothing. There was a bunch of incoherent thought fragments and a little bit of standup mixed in, and that’s what they presented and that’s the best they have. Why? Because as we all know, Trump pretty much did it. Okay. Like there’s very little doubt about that. And in adjust world, his lawyer’s pitiful performance yesterday would mean that he would absolutely be convicted. Unfortunately we do not live in a just world. We do not live in a just country or a just society and there were far too many Republicans in spite of all the ones who were shocked at what happened yesterday, more of them sat there in that Senate nodding along and saying, yes, I agree with what these two nutcases are saying. That is the scariest thing that happened yesterday.