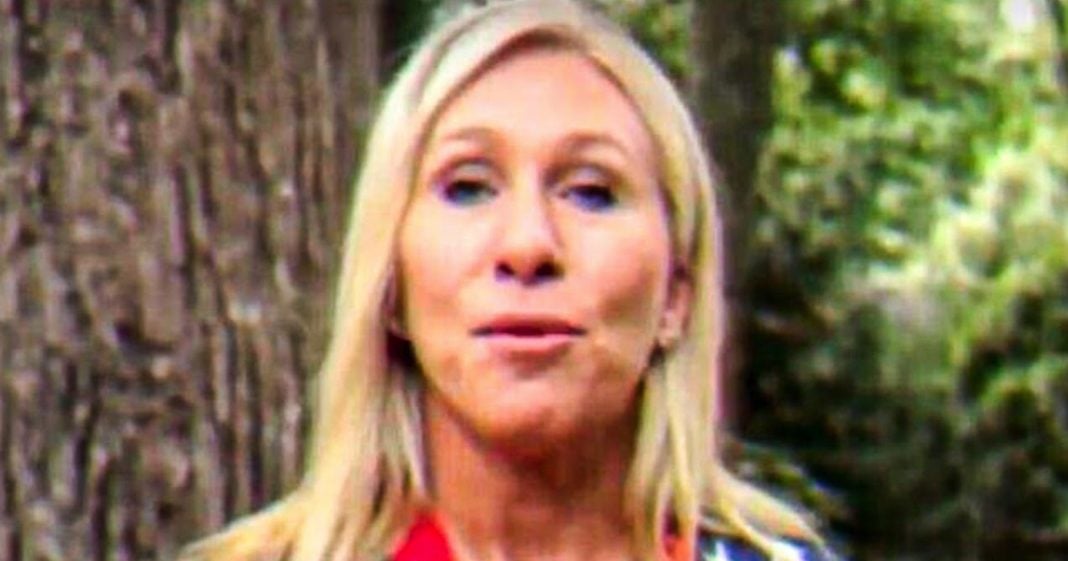 In a bizarre series of tweets on Tuesday, Republican Representative Marjorie Taylor Greene claimed that Trump was not only innocent, but that he was the real victim of the January 6th attack on the Capitol. Greene is willing to go down with the Trump ship, and she isn’t afraid to let the entire country know that she is just as unhinged as she was when she wrote those horrible things on social media that she got popped for last week. Ring of Fire’s Farron Cousins explains what’s happening.

Republican nutjob Marjorie Taylor Greene took to Twitter yesterday while the Senate was beginning their impeachment trial of Donald J. Trump, Taylor Greene got on Twitter to remind us that Trump was actually the victim of all of this and of course those nasty insurrectionists who were not Trump supporters, she says, um, they attacked both parties, which obviously means Trump couldn’t have done what he’s being accused of doing. I’m just going to read the tweets and then we’ll get into her, her logic. First one, if the hashtag January 6th, I, first of all, okay, I’m sorry. I know I’m three words in. Why are you hashtagging January 6th? You want to get it to trend? Is that what you want? I don’t know. That sounds very q-ish to me. If the hashtag January 6th organizers were Trump supporters, then why did they attack us while we were objecting to electoral college votes for Joe Biden? The, the attack ruined our objection that we spent weeks preparing for which devastated our efforts on behalf of Trump and his voters. You see dumb, what happened was that Trump earlier in the day told them to fight. That’s, that’s actually what happened. I mean, you kind of made your own point there. Like, why would they do it while we were doing this? Because that was the timing you idiot. That was literally the date they had been talking about forever because they knew you were going to object, but they also knew there was nothing you could do to change the outcome of the election.

Next tweet. They did not just target one party. They targeted Republicans and Democrats. They were against the government all together. Once again, you’re wrong about that. But before I even address that, I got to circle back to the comment you made. You said if they were Trump supporters in your first tweet, really the big Trump flags they were carrying. We, we don’t know if they were Trump supporters? Is that really what you want to go with Marjorie? Because we all know they were Trump supporters. Not, not only, by the flags they were carrying, but because we know their frigging names and people went back through their social media histories and they’re all big Trump supporters. So you just come across looking even dumber than you usually do Marjorie. So anyway, back to this statement that they attacked everybody, not just Democrats, not just Republicans. No, no, no. You see, they were going to attack anyone Republican or Democrat, you’re right about that, but it was only the ones who were anti-Trump. See, Marjorie you’d have been fine. Nobody was coming for you because you’re a Trump loyalist. Matt Gaetz probably had nothing to worry about, nor did Jim Jordan or Ted Cruz.

But they specifically were looking for Mike Pence to kill him because they believed he didn’t do enough to stand up for Donald Trump because he was going to be presiding over that vote in the Senate. So yeah. Final tweet. The Capitol attack was planned and organized, not incited in the moment by president Trump and no Republican member was involved. We were all victims that day. And once again, Trump is the victim of the never ending hate fueled witch hunt. Actually Republican politicians did participate. They may not have been Federal officials, but state level Republicans, yeah, they were there. They were a part of it Marjorie. Like literally everything you have said in your tweets here has been an absolute lie or misrepresentation. You’re incapable of telling the truth and I stand firmly behind my statement that I have said repeatedly and I will say it again, that Marjorie Taylor Greene needs to be put under psychiatric evaluation. She needs the be committed for an involuntary psychiatric hold until such time as she is able to prove that she is not a threat to herself or to others. That’s what I firmly believe needs to happen and this series of tweets she has put out is just further proof that this woman isn’t all there.