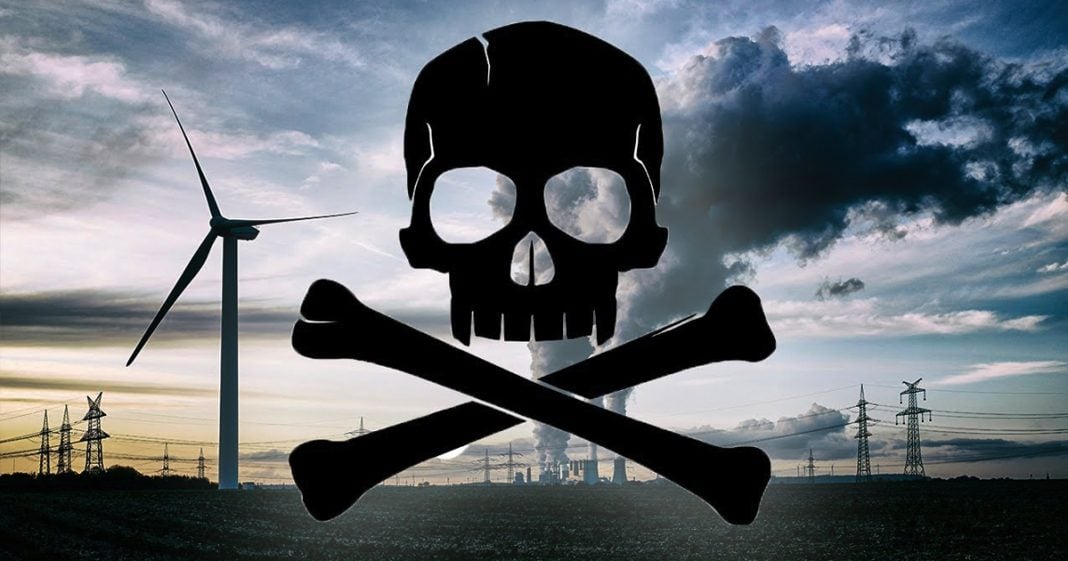 According to alarming new statistics, the pollution from the burning of fossil fuels has been attributed to 1 out of every 5 global deaths for 2018, the most recent year for which numbers are available. At this point, the world is only still burning fossil fuels for energy because a handful of people have decided that this is what they want to do, not because it is what we need to do. Ring of Fire’s Farron Cousins explains what is happening and how we put an end to it.

Scientists and researchers from three world renowned universities across the planet, recently put together a study that shows that in the year 2018, 8.7 million people across the globe died as a result of the pollution from the burning of fossil fuels, 8.7 million people. That is one out of every five, 20% of all the deaths of 2018 attributed to pollution from the burning of fossil fuels. And you know what else they found? And this is important, areas that burned fewer fossil fuels saw fewer deaths. It’s really not rocket science folks. There’s no big mystery to unravel. It’s all clear as day and has been for years and years and years. You burn more fossil fuel, fuels, you create more pollution. That pollution not only has a negative effect on the environment, but it has a horrifying negative health effect on the human beings who breathe in that pollution.

When you have areas that do not have as much pollution, you don’t have as much of those health effects, you don’t have as many, you know, chronic obstructive pulmonary diseases going around out there. You don’t have as many coronary diseases. You know, not as many heart problems. Pollution is directly linked to those two things and many others and we ignore that link at our own risk. Here’s the kicker though, what this study tells us is that these 8.7 million deaths in one year alone, 2018, the latest year that we have statistics for, these deaths are the fault of really just a handful of individuals across the globe, because those are the individuals who are still making the decision for governments, for businesses, for whatever it is to continue burning fossil fuels and they had been the ones making those decisions, those handful of people, for decades.

You know, renewable energy has come a long way in the last 20 years. So 20 years ago, it may not have been feasible to think that and entire country could run on renewable energy or that even 50% of the, the energy for the country could come from renewable. Now, that’s not a, that’s not a pipe dream. That’s a reality. We could be doing that, we absolutely could, half at least. But in order to do that, in order to have that today, we would have to have time machines and we would have to go back and create that infrastructure 10, 15 years ago, or at least start on it, start with the investments. Other countries did and other countries are seeing the benefits of that. We, the United States chose not to because a handful of individuals said, no. We know the science. I know they don’t admit that publicly folks, but we know they know behind closed doors, what the science actually says.

It doesn’t matter all the theatrics, the bringing of a snowball onto the Senate floor, they know that they’re lying because they’re being paid to lie by the fossil fuel industry, you know. But, but they know, and they made the decision along with the fossil fuel industry that we’re just going to keep spreading the big lie. People will die and we know that because of this study, but we don’t care because we don’t want to switch. And as I have repeatedly said, there was literally nothing stopping Exxon or Shell or BP. They actually could have many, many years ago when they first learned about the dangers of fossil fuels all the way back to at least, at least the 1970s, they could have said, okay, we’ll, uh, we’ll keep doing oil for now, but what if we, uh, what if we try to get some energy from the sun? And then we, we have the market on that, you know, 10, 20 years from now, no more oil for us. We’re all solar energy.

There was nothing stopping these oil giants from evolving into renewable energy companies other than you would have had to spend a little bit on investments and it would have taken some effort. Whereas continuing to pump oil took no effort. You already had that apparatus and it was making you rich. You were killing people and you knew it, but it was making you rich. Same thing with the politicians, not just here in the United States, but across the globe. We can now put a number on it, 8.7 million people in one year, 20% of global deaths, because a handful of individuals across the globe decided many years ago, we don’t want to evolve.