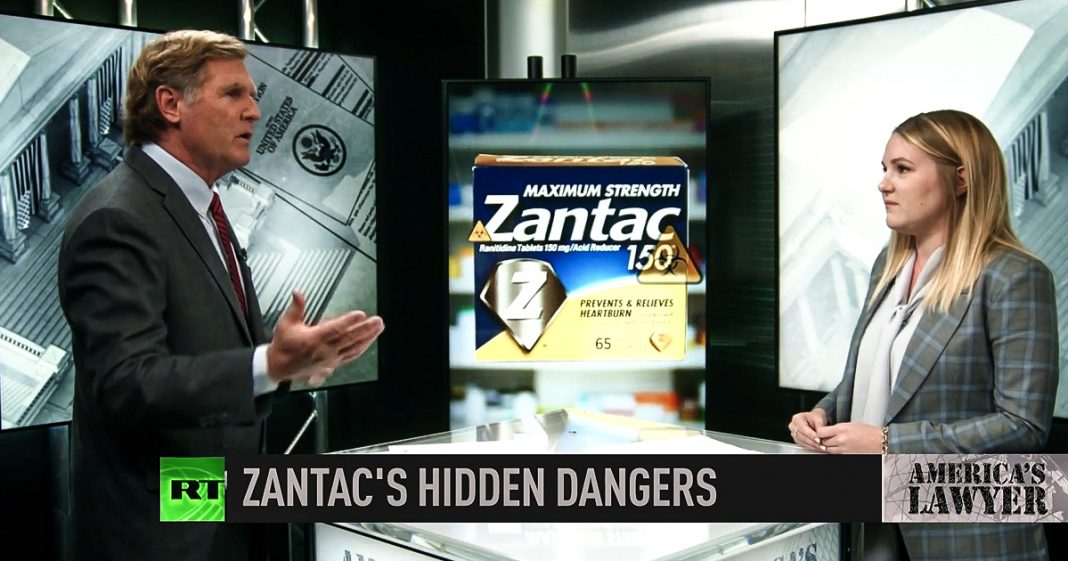 Via America’s Lawyer: President Biden invokes the Defense Production Act to supercharge the COVID-19 vaccine rollout. RT Correspondent Brigida Santos joins Mike Papantonio to discuss how 100 countries around the world insist the World Trade Organization waive patent rights to streamline vaccine production, which the U.S. and E.U. oppose. Plus, over 15 million Americans who take Zantac may be at risk of developing cancer. Attorney Sara Papantonio joins Mike Papantonio to explain litigation against the manufacturer, after studies revealed dangerous levels of NDMA chemical impurities which developed while the medication was stored in ordinary environments.

Brigida Santos:                   Yeah, of course. Look, there’s no direct mention of vaccine patents in the executive order that was signed by president Biden. Now the defense production act helps the federal government secure supplies to curb the spread of COVID-19, which would include things like protective gear, medical equipment and of course vaccines. Now, when it comes to the latter, the government could invoke the government patent use law to use pharmaceutical companies intellectual property, without permission, as long as those companies are paid reasonably. Now, the US government agencies have already given the vaccine maker Moderna two and a half billion dollars to develop its successful mRNA COVID-19 vaccine. The government has also helped fund AstraZeneca’s vaccine. And while Pfizer claims it hasn’t accepted any money from the federal government to develop its coronavirus treatment, Public Citizen reports that Pfizer is using a spike protein technology that was developed by the US government. Now this matters because Pfizer has overcharged American taxpayers for the 200 million doses of its treatment that were purchased by the US government. So these patent issues are getting in the way.

Mike Papantonio:             Out of every company you’ve just mentioned, Pfizer is the one that scares the bejesus out of me only because I’ve been to trial with them so many times. I know how they’re corporate, I know how it works at Pfizer. It’s all about profits. You pointed out taxpayers paid for the basic part of the Pfizer program even though they say we didn’t take any money from taxpayers, that’s ridiculous. At least the other companies will own up to the fact, yes, we’ve taken money. I think where we’re probably, this is just a guess, my, my guess is Moderna will show some leadership here, I hope. Have any pharmaceutical companies agreed to waive vaccine patents during the pandemic at this point?

Brigida Santos:                   Yeah. Moderna, Pfizer and AstraZeneca have vowed not to enforce their patent rights during the pandemic, but they and their manufacturers are not sharing information with other production houses about how to actually make these vaccines. That is the real problem. On paper it looks like they’re not waging an intellectual property fight, but behind the scenes, they’re keeping their methods secret so that competing manufacturers can’t develop generic vaccines based on their own. Now these vaccines aren’t exactly easy to make. While Moderna and Pfizer’s mRNA vaccines are a little bit easier to manufacture than AstraZeneca’s, it still requires highly specialized manufacturers. So the world health organization has only approved 43 companies to manufacture vaccines and even with the defense production act expanding that, it’s still going to take a very long time to produce enough vaccines to curb the virus, especially if these pharmaceutical companies and their manufacturers are refusing to share information about how to actually make these treatments.

Mike Papantonio:             Okay. This is, this is a big test for Biden. This is a huge test for Biden. He knows he can do something about the patent issue by just basically it looks like an executive order. He knows he can do something. The question is, will he do it? I’m hoping he will because if we see that side of Biden, I, it’s just going to be a glorious four years. So how are vaccine patents preventing poor countries from accessing COVID-19 treatments? They’re doing it on purpose, it appears to me.

Brigida Santos:                   Well, vaccine patents are basically creating an artifi, creating artificial scarcity on a global scale and leaving poor people in those poor countries to die. A coalition of 100 countries led by diplomats from South Africa and India are now calling on the world trade organization to waive patents related to COVID-19 during the pandemic, specifically so poor countries can make their own generic vaccines. But unfortunately the United States led by president Biden and the EU have pushed back against the proposal and a majority of the world.

Brigda Santos:                   Basically arguing that patents and the profits they generate are the key to innovation. Public health advocates have also called on wealthy countries to donate or sell vaccines to poor countries.

Mike Papantonio:             It’s early still, Brigida, I’m holding out hope that Biden will push through this hold that the drug industry has on every bit of Washington, DC. I’m really holding out for that. We’re going to do this story on a regular basis to see if he caves in. I’m hoping he doesn’t. Thank you for joining me. Okay.

Mike Papantonio:             The popular acid reflux medication Zantac has been under heavy scrutiny for a lot of years after it was revealed that the drug has been contaminated with a chemical called NDMA and also that the drug was breaking down into dangerous components even beyond that. Joining me to talk about this latest Zantac is, the saga of Zantac, actually, Sara Papantonio is heading up that project, really in many parts of the country. Sara, first of all, give, start from the beginning. What is Zantac? Why should we be concerned about it?

Sara Papantonio:              Zantac was introduced into the market in the early 1980s, and they introduced it as this miracle drug that was designed to stop heartburn in its tracks. This was a hugely popular drug because it’s an over counter, the counter drug. And what that means is, you know, when you go to get it, you don’t have to have a prescription. You don’t have to go to a pharmacist, just walk right into a drug store and grab it. And we saw so much success with, with Zantac, it actually became a billion dollar drug.

Sara Papantonio:              The first of its kind in that annual sales. So what these manufacturers were seeing were dollar signs in their eyes. They weren’t seeing that this drug was actually poisoning people.

Sara Papantonio:              Absolutely. There is absolutely no question of whether or not there was knowledge here. We had scientists in the early 1980s before this drug was even developed saying, there’s a ingredient in this drug Zantac called ranitidine. Ranitidine breaks down when it’s exposed to high heat or temperatures or, or any type of exposure. They said, you need to watch this ingredient because it causes NDMA and that NDMA causes cancer. So there was no question. There were studies released over the 40 year period that Zantac was on the market that this NDMA would cause huge trouble for its consumers.

Mike Papantonio:             Well, is it, Sara, there’s also the part of it that’s the most bothersome. A person takes Zantac right. They, they get a load of NDMA. They don’t even know it. Most people don’t even know that the only use for NDMA is to test laboratory rats for cancer. They give the laboratory rats NDMA because it hurries up the process of cancer. Well, the, the public, I don’t think gets the connection between if they put that NDMA in their body and other DMA that comes from food. Talk about that just a little bit.

Sara Papantonio:              That’s the absolute truth. This, I mean, just to put this into perspective, this is a chemical that is used in rocket fuel, rocket fuel, and they’re allowing consumers to put this chemical in their body every single day, some over the course of this 40 year period that it’s been sold. Now, NDMA is a carcinogen that is so potent that scientists won’t even do a study, an epidemiological study on human beings, because they’re so confident that NDMA can be linked to cancer.

Mike Papantonio:             Okay, you’re doing, you’re handling the discovery. You’re getting ready for trial on this case. What is the most startling things that you’re finding about it? If you were just say, you know, if I’m looking at this across the board, this scares the bejesus out of me?

Sara Papantonio:              The fact that it’s so obvious that, that this, this NDMA and this ranitidine molecule, that it could have been identified that this was going to be a problem. It was so obvious and it was so easy for these companies to figure this out, but they just either turned a blind eye or knew, and just chose not to say anything about it.

Mike Papantonio:             Sara, are you seeing, I’m seeing some, some studies that talks about how the NDMA actually modifies DNA, that is really scary. It modifies your natural DNA and creates cancer. Is there truth to that? Are the studies there?

Sara Papantonio:              So what we’re seeing with NDMA is that it’s causing what we call DNA fragmentation and it’s exactly how you described it. The NDMA is reacting with the cells in your body, and it’s taking a healthy cell and it’s turning it into a cancerous cell and because NDMA is so potent, that cancer is growing at an alarming rate. It’s causing all kinds of cancers. We’re seeing liver cancer, gastric cancers, lung cancers. It’s so alarming, just how potent and you know, and how quick this NDMA reacts to the body.

Mike Papantonio:             Yeah. In other words, it’s not even a law, it’s not even a latency period to it, sometimes it’s immediate. Look, here’s my advice. Don’t take Zantac. Do away with Zantac. Pepcid, no showing on Pepcid doing the same thing. It’s a good alternative, Pepcid is something I tell when people ask about Zantac, take Pepcid. They got the tablets, chewable tablets and the pills. I hope you go after them hard. I know you will. When will you be in trial?