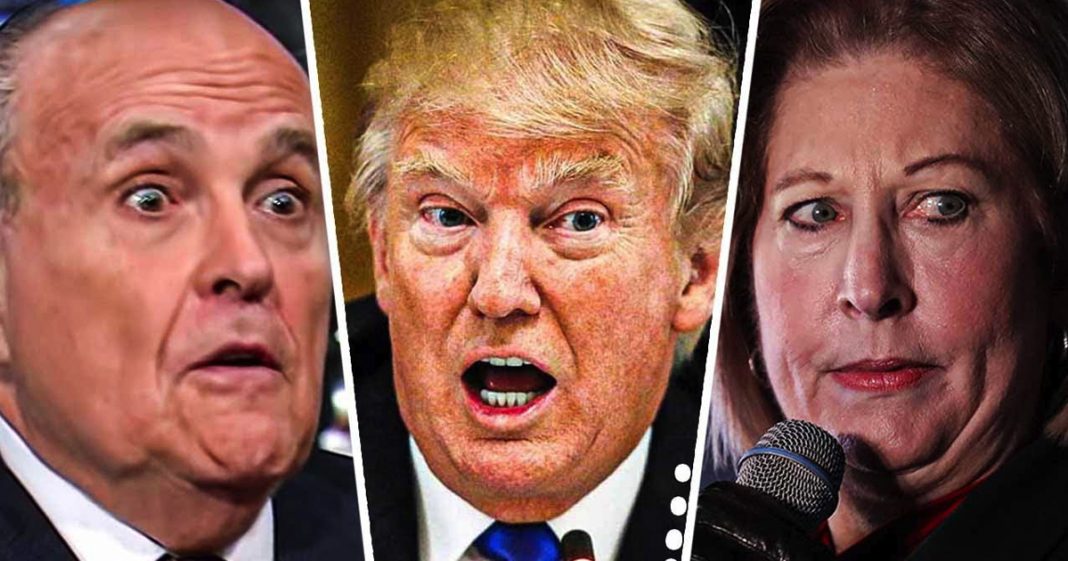 Far too many Republicans in Washington, D.C. are throwing their unwavering support behind former President Donald Trump, and it won’t end well for them. They need to take a good hard look at what has happened to Trump’s allies over the past month: The billions in defamation suits, the destruction of their life’s works, the complete loss of credibility and the loss of their own livelihoods. Trump destroys everything he comes in contact with, yet these Republicans refuse to learn that lesson. Ring of Fire’s Farron Cousins explains what’s happening.

All throughout the Trump administration there were folks on Twitter who were keeping up with what was happening to every single person who ended up leaving the Trump administration for one reason or another, whether they left on their own or they were kind of forced out. And the overall theme, in fact, they said this through most of the tweets was that if you try to work with Donald Trump, he will eventually humiliate you. He will turn on you and your life will certainly not be better because of your allegiance to Donald Trump. And while that was certainly true throughout the entirety of the Trump administration, I think for all of these Republicans out there, you know, your Taylor Greenes and your Boeberts and your Gaetz and your Jim Jordans and your Lindsey Grahams, y’all need to just look at recent history. Just look at the last month, just the last month, what has happened to every individual that has thrown their lot in with Donald Trump and did everything they could to protect this man.

Their lives are falling apart. Need some examples, gladly. Rudy Giuliani, Rudy Giuliani needed a pardon for, from Donald Trump because, you know, he’s facing those massive investigations up in New York that threatened the rest of his life. He’s an old guy and he could spend his last years in prison if these investigations turn up criminal activity. But instead of getting a pardon from Trump, he got nothing. And Giuliani went out there, embarrassed himself every day, spread Donald Trump’s lies, trying to convince the public that Donald Trump was good and pure and right, and it failed. So Trump didn’t reward him. So he’s still facing the investigations and of course now facing literally billions of dollars in defamation lawsuits and Trump’s not there to help him. Same thing with Sidney Powell, while she may not be facing the criminal investigations that Giuliani is, she is also facing billions of dollars in defamation suits.

She risks losing her legal license, much like another Trump attorney Lin Wood, who is also facing some lawsuits. And unless he submits, according to him, if he doesn’t submit to a psychiatric evaluation, he could lose the ability to practice law in the state of Georgia. Want more? Mike Lindell, the MyPillow guy who went all in on the really crazed side of supporting Trump and how has that fared for him? Well, there’s very few stores now left that are willing to carry his pillows. He has become a laughingstock around the country and as I predict, I’m willing to bet he is going to suffer the same fate with his company that Papa John Schnatter suffered with his company, where they him out, even though he founded it, he started it, he was running it. They said, you’re toxic. Get out. I would not be shocked if that happens to Lindell, he would lose everything because of his undying unwavering support for Donald Trump.

So again, I will issue this warning to those Republicans who are still risking everything to defend Donald Trump. It doesn’t end well for you. You don’t end up with his base next time you try to run for an election. You’re going to get them anyway by virtue of being a Republican. But you’re not smart enough to see that. What you’re going to do instead is alienate all the normal people in this country who luckily do outnumber the Republican base or the Trump loving Republican base, I should say. There’s more of us than there are of them and you’ve seen what happens to people that Trump brings into his circle and then ditches once they’re useless. You get sued. You get criminal investigations. Some of them have ended up being convicted. Luckily they got pardons, you know, Manafort and Stone. He can’t pardon anybody else. He can’t bail out anybody else. All he can do is throw you under the bus. There is nothing to be gained from your undying devotion to Donald Trump and again, the last month has proven that for so many individuals.