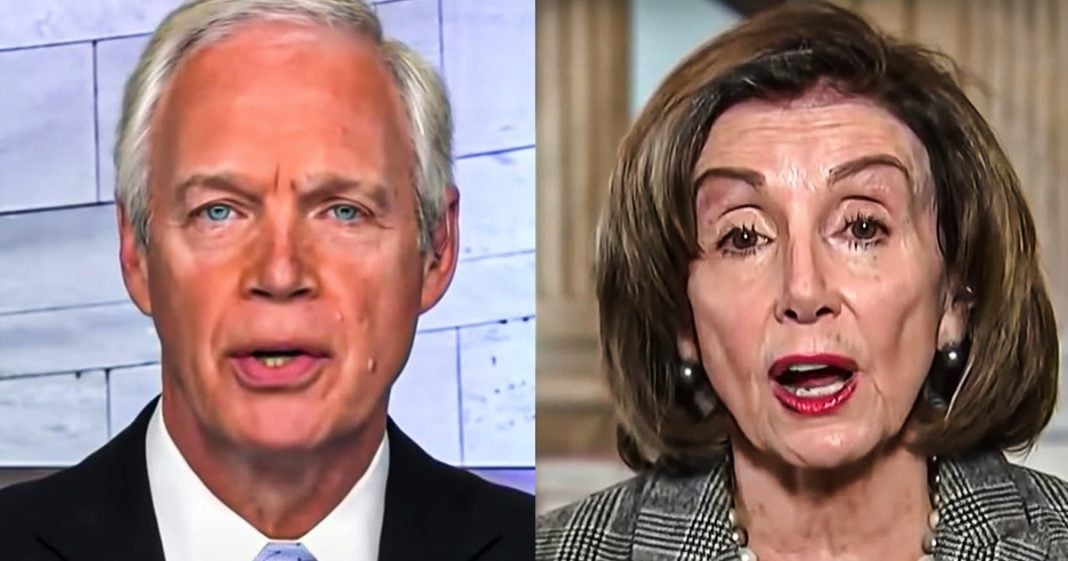 Republican Senator Ron Johnson from Wisconsin appeared on Fox News this past weekend to let everyone know that he’s not a smart man. Johnson, offering absolutely no evidence to back up his points, claimed that it was House Speaker Nancy Pelosi who is to blame for the attack on the Capitol by crazed Trump supporters. Ring of Fire’s Farron Cousins explains why this is one of the most idiotic statements we’ve seen from a Republican in quite some time.

Republican Senator Ron Johnson from the state of Wisconsin appeared this past weekend with Maria Bartiromo on Fox news, where Johnson told us who was really to blame for the insurrection on the Capitol on January 6th. And it’s not Donald Trump. It’s not his lawyers who propagated all these lies. No, no, no. According to Ron Johnson, Nancy Pelosi, Pelosi is responsible for all of this, he said. Now that was the extent of what he said. He didn’t give any reasons why it was Pelosi. He did say that this impeachment was a opportunity for her to deflect the blame of that insurrection, but yeah, finger pointing squarely at Nancy Pelosi. You know, sometimes I really, really, really hate these Republican officials because they make me do things that make me cringe and one of those things is having to defend Nancy Pelosi. I am no fan of Nancy Pelosi. I think she needs to be gone from office, but that’s because I don’t think she is an effective leader and she has not done enough to help the people of the United States.

You know, I want to see more from her, what I do not hold against her at all, because I do not think she is to blame at all, is inspiring an insurrection on the Capitol. Nancy Pelosi had nothing to do with that. You know, I know that may not be the most progressive or leftist stance to take defending Pelosi, but I, I think we should all agree, that Nancy Pelosi didn’t do that. That she was probably just as shocked as the rest of us were, as we watched that footage on TV, right? This wasn’t Nancy Pelosi’s insurrection. Nancy Pelosi didn’t go out there and, you know, fund these events like Republicans did and give a couple hundred thousand dollars to the rally. She didn’t speak at any of these things. She’s not the one who walked past them and gave that fist of solidarity, no, that was Josh Hawley. She didn’t offer to be Donald Trump’s attorney, to defend against or, or to, you know, take to the Supreme Court, these election challenges, Ted Cruz was the one who volunteered for that. So I do have to wonder, Ron Johnson, why in the hell is this Pelosi’s fault?

Anybody, anybody in the comments want to, want to take a stab at that as to why Nancy Pelosi would be the one to blame here. I mean, don’t get me wrong, there’s plenty of things Nancy Pelosi has done that are absolutely abysmal and we can talk about that all day, but this ain’t one of them. Nancy Pelosi is not responsible for what happened on January 6th and idiots like Ron Johnson who go out there and say stupid things like this, you are. Your party is. Your party literally did this. Your party, members of party paid for this. Some of Republican donors were actually involved in it. So I’ll ask again, Ron Johnson, how in the hell is any of this Nancy Pelosi’s fault? How in the hell is any of this any Democrats fault? The answer is it’s not and anyone who says otherwise is probably just as guilty as Trump.