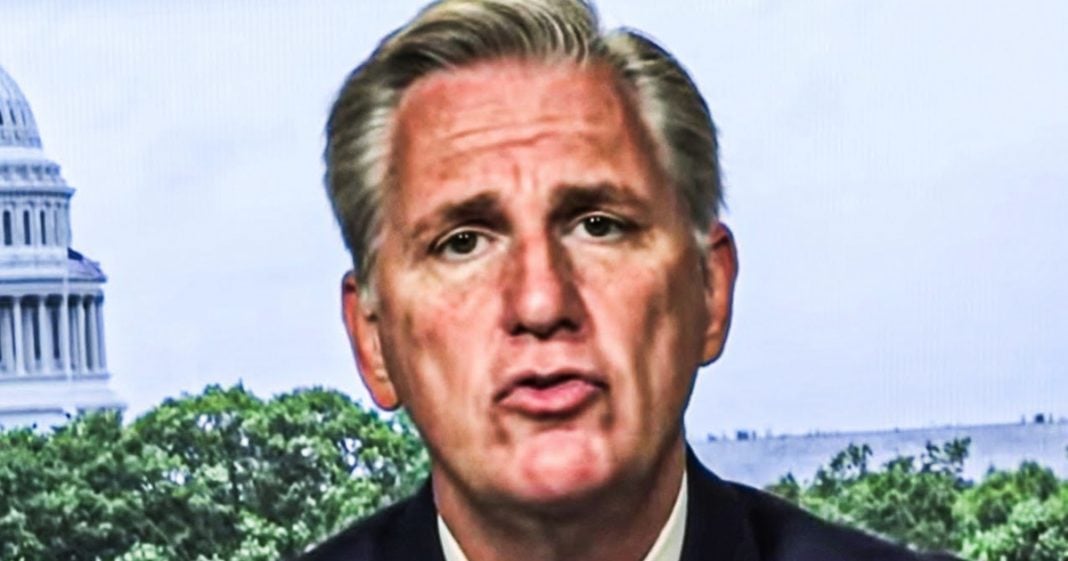 Republican House Minority Leader Kevin McCarthy thinks that the American public is stupid. And we know that he thinks this because of how he is pretending that the very public war within the Republican Party isn’t happening. We can all see it playing out in real time on social media and in the news, but McCarthy refuses to acknowledge it, and more importantly, refuses to do anything to get his members in order. Ring of Fire’s Farron Cousins explains what’s happening.

Republican House minority leader Kevin McCarthy is in an unenviable position, let’s be honest about that, right? This guy has to control both factions of his own Republican party inside the House of Representatives. But unfortunately, due to the fact that Kevin McCarthy is one of the worst leaders imaginable, he is instead of getting people to do the right thing and, you know, all come together, he is instead pretending that there’s no war within the Republican party, a war that all of us can see with our own eyes, a war that his own members are waging in front of us, very publicly. I mean, you see it on Fox news. You see it when Liz Cheney went on Fox news this past weekend and said, look, some of us are in denial about the fact that Trump lied to us. You see it last week when Marjorie Taylor Greene refused to really admit that she had ever been wrong and had to come out and say, okay, I guess 9/11 did happen and that school, you know, massacres are real.

McCarthy wouldn’t punish her. McCarthy stood by Liz Cheney while privately, according to reports, telling her to apologize. McCarthy’s just living in LA LA land right now, as everything burns down around him, he’s pretending like you don’t have people like Matt Gaetz flying to Wyoming to campaign against Liz Cheney even though it’s not even campaign season. He is pretending that there is not a war for the soul of the GOP and that war is being waged over people who just want to be horrible Republicans and people who want to be horrible Republicans who also worship Trump. That’s what your modern day GOP is. You got your just regular old horrible people who want to take away the rights of people who aren’t straight white men and then you have the people who want to do that, but also pay devotion to Donald Trump in the process. And Kevin McCarthy is pretending like this isn’t happening. Um, what gets me about this and I mentioned this earlier today as well, is the fact that this is all over love of Trump. Okay. That is where this is all over.

This is 100% about, do we want to love Donald Trump or do we just want to go back to being Republicans? And McCarthy can’t even get his own members of the House in line enough to say, listen, this dude’s not even president anymore. Can we please move the f along? He won’t do that. So instead he goes out in public and he does these interviews and he says, no, there’s no fighting. And then they bring on the next guest, which is a Republican who either says, yes, these other Republicans have to go because they were mean to Trump or it’s a Republican who says these other people are crazy and McCarthy is pretending that none of this is happening, that everything is fine and dandy and wonderful and Republican world. Well, it’s not folks, and I know that we all know that because we’re not trying to cover anything up. All we’re trying to do is show people what’s actually happening and everybody can see it with their own eyes. So stop listening to McCarthy. That man is never going to admit that he has lost control of his party, because if he had to admit that, he would admit that he’s being a horrible leader and he’d probably lose his minority leader status.