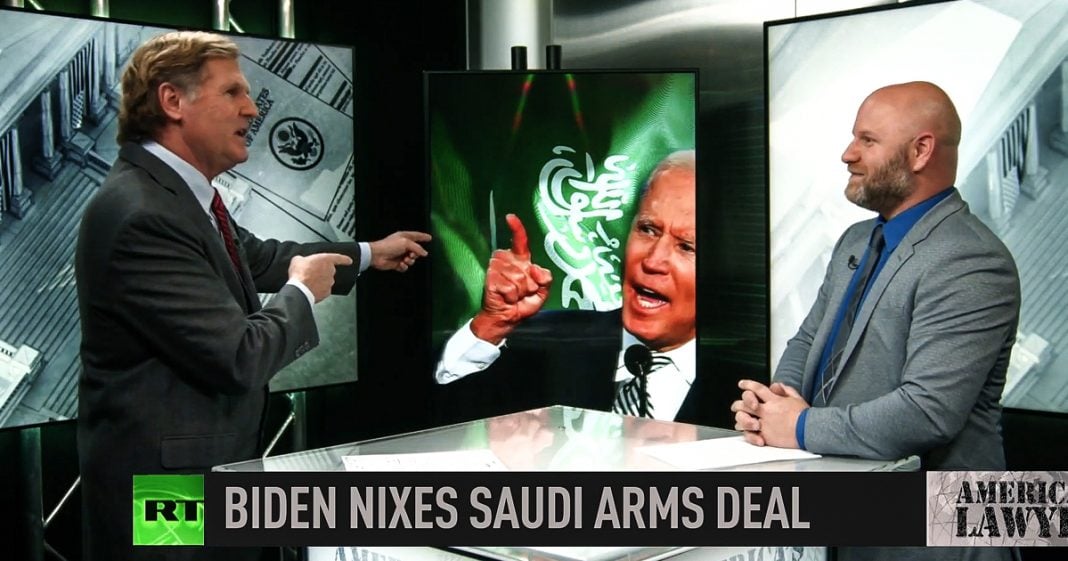 Via America’s Lawyer: President Biden halts a Saudi arms deal brokered under Trump. Could the new administration be pivoting away from future dealings with the controversial regime? Mike Papantonio & Farron Cousins discuss more.

Mike Papantonio:             And finally tonight, some good news. Joe Biden has halted a massive arms sale to Saudi Arabia that the former Trump administration had approved. Matter of fact, Trump doubled down on arming the Saudi Prince. Now we’ve got Biden who’s saying, nuh-uh, not by me. I got Farron Cousins with me to talk about this. Farron again, this is such a great move by this president. I mean, you know, when is the last time we’ve been able to do back to back stories where we talk about good job, Democrat, good job? When is the last time? It’s been a long time I got to tell you.

Farron Cousins:                  It really is. You know, we’re talking about this $478 million arms sale is what this was. And we already have reports that the Saudi Royal family has been taking American weapons, selling them to Al-Qaeda over in the Middle East and that, that’s one of the biggest reasons why this was such a terrifying thought, not to mention the fact that Saudi Arabia is involved in, in, in Yemen. You know, the atrocities being committed over there. They don’t need any more instruments of death. I know our military industrial complex feeds off it, but we cannot continue to just export death across the globe.

Mike Papantonio:             Davos in the Desert. How disgusting to me. We talked about it last week, disgusting. Wall Street goes, you got money, let me have it. Hollywood goes, I’ll take money from you, no matter how disgusting you are, because it’s a disgusting way to view the world. Biden shows some class and says, you know what? This has got to end. We need to reevaluate where we are arming the Saudis. You gotta, I can’t wait for the movie, The Dissident, and The Dissident it talks about the whole Khashoggi murder.

Mike Papantonio:             And we start getting a glimpse of how, how ugly this, this regime is, how ugly this Prince is. And we have to understand given the chance, this is a guy that would blow Israel off the map. He would foster terrorism at, at a full tilt if he could.

Farron Cousins:                  And what they’re doing to their own people as well. The massive human rights abuses that the Saudi Arabian Royal family does to Saudi Arabian citizens. You know, we have discussed that as well. It’s absolutely atrocious. So it’s not just, they’re going to other countries and doing it, they’re doing it to their own people. So, so no, you don’t get your F 35 jets. You don’t get more guns and tanks and bombs. Maybe you should work on fixing what’s happening in your country.