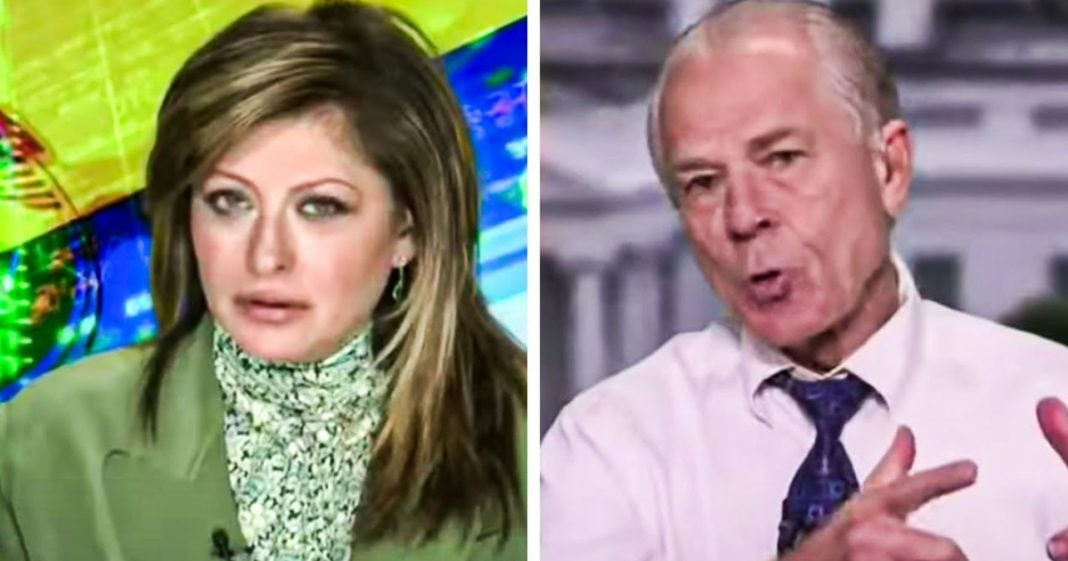 Former Trump advisor Peter Navarro appeared on Fox News over the weekend to explain his latest conspiracy theory. The theory is that Bill Barr – Trump’s Attorney General – managed to sabotage the last few weeks of Trump’s administration in order to help Joe Biden come up with executive orders. This theory makes absolutely ZERO sense, but that’s how things go in Trump World. Ring of Fire’s Farron Cousins discusses this.

Former Donald Trump economic and trade advisor, Peter Navarro, appeared on Fox news opposite Maria Bartiromo this past weekend to talk about the latest conspiracy as to how Joe Biden could accomplish so much in such a short amount of time. I mean, Joe Biden’s only been president for two and a half weeks. He signed all kinds of executive orders. He’s got things happening. Things are, are working again. God forbid and Peter Navarro understands exactly how this happened, by the way, Peter Navarro, the guy who repeatedly failed to work out any kind of deal during the trade war that is still going on and everybody seems to just forget that that happened and is still happening. Yet, Navarro isn’t disgraced and shunned by the media for being an abject failure. No, no, no. He is still welcomed on Fox news where he spread the conspiracy this weekend, that Bill Barr somehow teamed up with Joe Biden and the deep state, according to Peter Navarro, in order to not only help Joe Biden come up with all these executive orders, but to also impede all of the executive orders that Trump tried to do in his final days in office.

Here’s what he said. Word for word. Here’s the news behind the news, Bill Barr, president Trump’s attorney general actually turns out to be also Joe Biden’s first attorney general. I’ll get to why that is an idiotic statement in a moment. Bill Barr’s office of legal counsel was fast tracking all these Biden executive orders, and basically it was a deep state coup. Does, does Peter Navarro understand how things work or has he been in a coma for the last few weeks? Understand this ladies and gentlemen, Bill Barr left, he left, no longer was going into the DOJ, no longer had authority at the DOJ anymore on December 23rd, 2020. Okay. Bill Barr was out, no power, no nothing. He went back to civilian life on December 23rd, the day before Christmas Eve, he was removed from the Trump administration, not a part of it anymore. On December 23rd, we still had not gone through the insurrection at the Capitol. We still had not had the certification of the electoral college votes. Donald Trump was still out there, not banned from Twitter, spreading his election lies and Bill Barr was gone.

So no. Oh, also at that time, Trump’s people were not cooperating with the Biden transition team. They had stopped the cooperation at that point. So no Peter, Bill Barr was not in fact doing anything to one, impede Trump’s executive orders because he wasn’t even there you moron. And two, he wasn’t helping Joe Biden because Bill Barr is still a hardcore Republican. What is it with these idiots? And I hesitate to call them idiots because I don’t know if I should call them idiots or sociopath’s because they have absolutely no problem lying to people to achieve an end goal. Like Peter Navarro is absolutely nutso in this particular segment, and again, this is the guy who repeatedly failed. Like it was just his job to go and negotiate with China to work out this trade deal and he repeatedly failed. Now, if anybody that I knew failed that much in their job, they wouldn’t be invited on Sunday morning talk shows to come give their opinion on their old job. No, they would be shunned. They would be blacklisted and rightfully so, as Peter Navarro should be, the man is a complete and total failure and based on his new crazy conspiracy theory, he’s a little bit nutty as well.