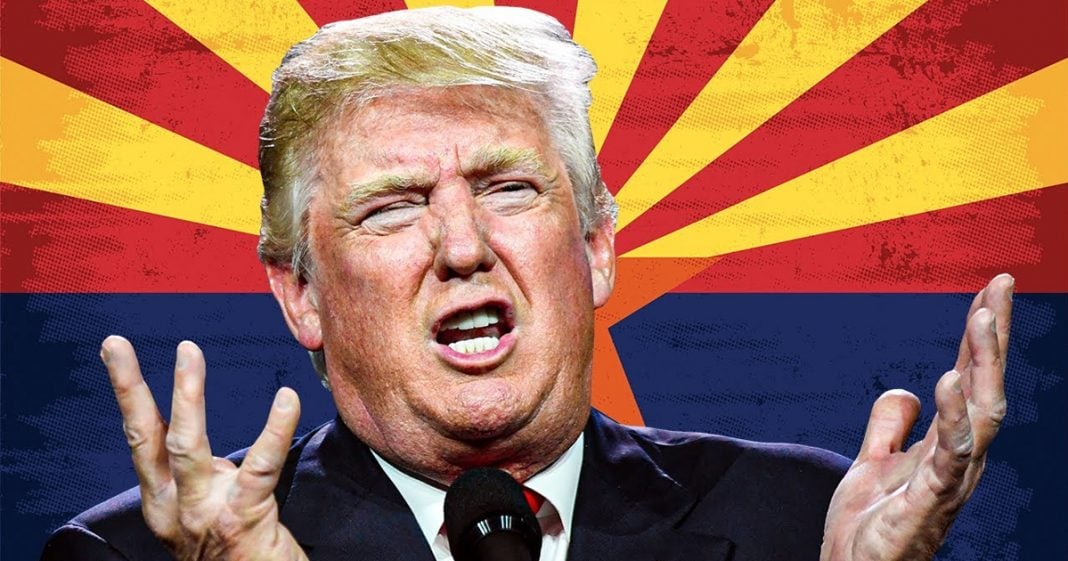 Republicans in the Arizona state government are apparently so angry with Republicans at the Maricopa County Board Of Supervisors that they are threatening to arrest them if they don’t hand over all of the ballots and voting machines from the 2020 election so the Senate can do yet another recount to see if Trump won. These Republicans are losing their minds, and they could lose a lot more as a result of this. Ring of Fire’s Farron Cousins explains what’s happening.

Well folks, there is some hot Republican on Republican drama unfolding over in Arizona, where you have the Republicans who are in control of the state legislature now threatening to arrest the Republicans who are in charge of Maricopa County, the board of supervisors there, which again is made up mostly of Republicans. The Senate Republicans want to arrest the Maricopa Republicans if the Maricopa Republicans do not turn over all of the ballots, all of the mail-in ballots and all of the voting machines from the 2020 election so that the Republicans in the Senate can then do their own recount. Even though everything’s already been certified and of course they’ve already had recounts, they’ve already had hand counts. All of this has been done. All of this has repeatedly shown that the votes were 100% accurate. Like the audit of their voting machines showed 100% accuracy. All of their hand counting of the ballots showed that there was no fraud.

There was no problem. Everything was okay, everything was on the level. And yet Republicans in Arizona have lost their ever-loving minds and now they say, give us the stuff so we can go through it or we’re going to frickin arrest you. This, by the way, incase you haven’t been paying attention, a week or so ago those same Republicans in Arizona, the Republican party of Arizona voted to censure Cindy McCain, who’s not even a politician, Republican Arizona Governor Doug Ducey and of course, former Republican Senator Jeff Flake. So two people who aren’t even really with your party anymore and one of them, who’s your governor who is actually in charge of you. They voted to censure them just because they weren’t happy that they’re not Donald Trump lackeys. Here’s What’s really happening in Arizona. It’s not just that obviously the Republican party is losing their mind. The question is, why are they losing their mind? They’re losing their mind because they’re losing their power. Oh, sure. They still have the majority’s in the state, but that’s about all they got. Right?

You lost your Senate seats. You know, you had John McCain there for forever, Republican holding that seat and then, oh no, Jeff Flake turned against the Republican party. You lost those seats ultimately to Democrats, you’re losing your grip on your state. You’ve already lost the national seats and you’re about to lose even more state seats in the next election. So they’re freaking out and they’re panicking. That’s why they’re doing these things. They want to show that no, we’re the Republican party of Arizona. We still have strength. We still have power. We’re, we’re censuring you. We’re, we’re going arrest you if you don’t give us the machines. You gotta, we’re big and powerful and you have to respect us because nobody else in this state is respecting us. That’s what’s happening in Arizona and it’s going to continue to happen, by the way, they’re going to continue making fools of themselves, which in turn, just turns off more voters. They don’t understand, this is kind of like a self-fulfilling prophecy here. They’re so afraid of losing power that they make the craziest decisions that ultimately costs them more power. And I, for one, love to see it.