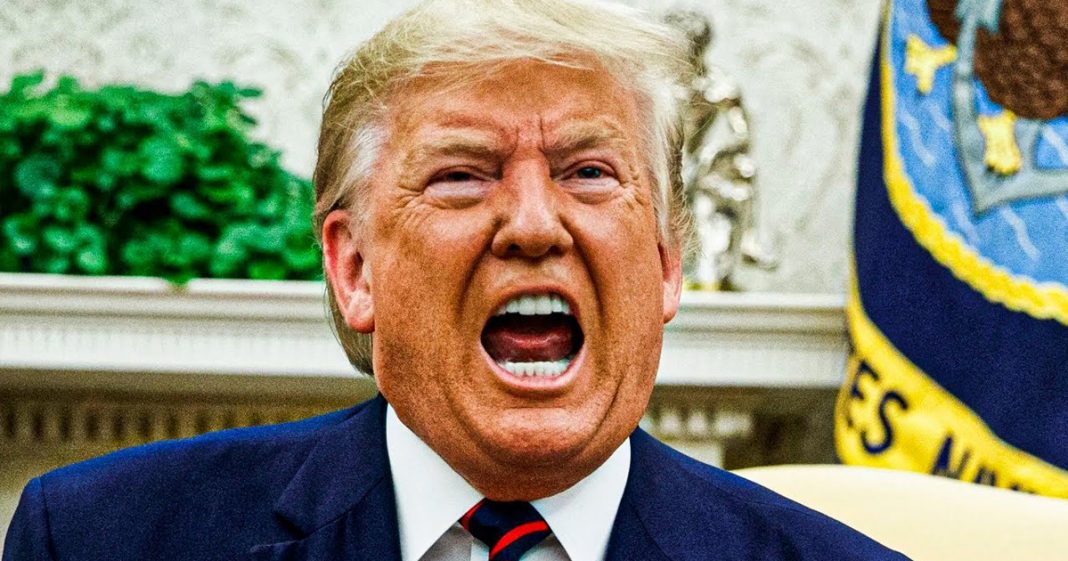 Donald Trump’s most unhinged followers have come up with a new theory in order to soothe their hurt feelings. The new theory is that Trump is still secretly president and that he’s somehow carrying out executions from the White House. They haven’t provided any details as to how all of this is working considering Biden is clearly in the White House, but details have never mattered to this crowd. Ring of Fire’s Farron Cousins explains this ridiculous new theory.

And even though every claim that they’ve made has proven to be completely false there are still far too many people in this country who follow along with this conspiracy theory group and not to be outdone by all their previous failures. They have a new conspiracy out there that NBC news pointed out this week and this one truly takes the cake. This really is like the craziest of the crazy of the conspiracy theories that the Q folks have come up with. And here it is, they’re now claiming that Donald Trump never left office and that he is still secretly president. He is living in the White House, I’m guessing along with Joe Biden, because we’ve seen Biden in the White House, but Trump is also kind of lurking around there still, carrying out public executions on the White House lawn of his enemies in the deep state.

Now, if there was a crazy man, a former president killing people on the White House lawn, don’t, don’t, don’t you think somebody would have reported on that? Like, I mean, don’t you think somebody walking past the White House, because as far as I know, you can still do that. You can get your picture taken in front of it, you know, through the fences and everything, but you still, I think you would know like, hey, that guy’s chopping people’s heads off. Should we do, are we gonna, no? Okay. Oh, we need a picture of that. Nobody has cameras like that anymore. But anyway, I would think people would notice that. I would think other people would notice like, hey, um, 30 people from the FBI just haven’t shown up all week. Should we, should we do something about that? Should we call their spouses? Or we just going to assume that the worst happened and just move on? Like people would be disappearing all the time. There would be lots of blood on the white house lawn, literally.

There would have to be, you know, constant parade of trucks coming in and out moving the bodies. I don’t understand how these people can be this stupid, but this is it. This is it. That’s the conspiracy. Trump’s still at the White House and he himself personally is murdering people openly, publicly, they say, they say it’s public on the White House lawn. And nobody sees it. Nobody sees it. Um, so yeah, I just gotta ask, like, what kind of drugs are y’all on, for real? Because that’s gotta be a weird concoction going through your brain right there in order to come up with this conspiracy theory. Like that’s not just one drug, that’s a combination because I don’t know how else you can come up with, you know, crazed Donald Trump out there, you know, with an ax or I don’t know what he’s using. I don’t know how these people are being executed, but by God, the Q people swear Trump is out there killing people on the White House lawn because of course, he’s still president and that’s, that’s something presidents do apparently in the minds of the Q people.