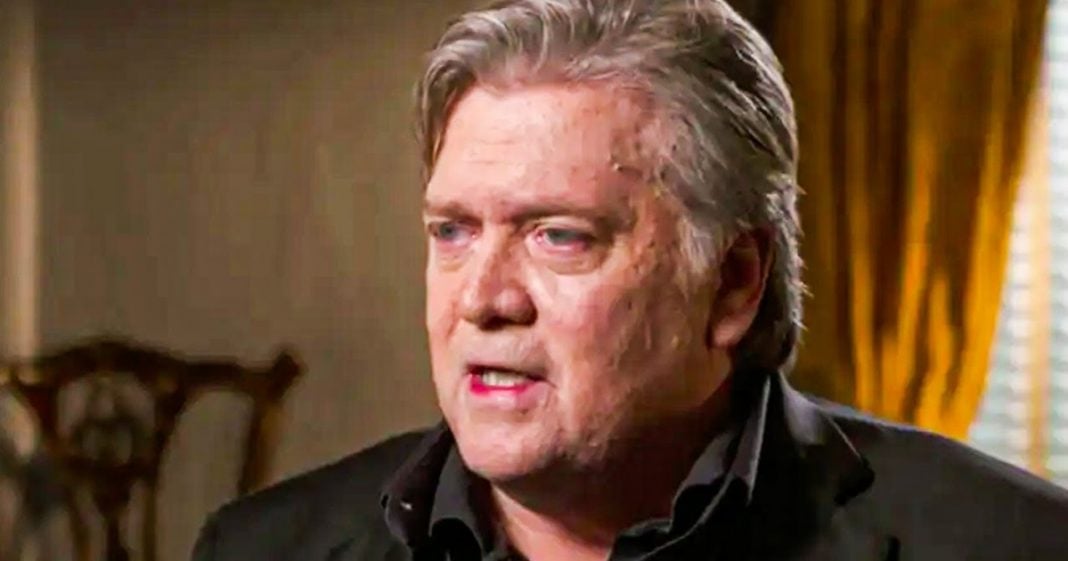 Steve Bannon may be off the hook for the federal charges against him, but the state of New York is now looking into whether or not they can charge Bannon with the same crime but at the state level. Due to the fact that Bannon has accepted the pardon, he would be in a very unfortunate position with the state because the acceptance of a pardon is viewed as an admission of guilt in the eyes of a court. Ring of Fire’s Farron Cousins explains what’s happening.

Steve Bannon may not be out of the woods yet with his alleged charity fraud that he engaged in with the other folks involved in the we build the wall charity, which I think it’s odd that that thing is even described as a charity. It’s not a charity. You want to build a wall because you hate the people over there. It’s a, it’s a hate monument really is what it is. But anyway, Steve Bannon got pardoned by Donald Trump because he had been charged with federal charges of, you know, scamming the donors of that particular group. So he takes the pardon, but now, prosecutors in New York are saying, well, since he can’t be charged federally, we’re going to go ahead and just investigate whether we can charge him on the state level, because the original charges, the original federal charges actually stemmed from an investigation from the Manhattan district attorney’s office. Didn’t know that, by the way, I didn’t, I don’t know if you did.

But, so they have all the information, they have on the material, they understand and, you know, in a situation like that, when you violate both state and federal law, most of the time, depending on what the crime is, you’re obviously not going to get charged by both. So if it’s federal, you go with federal. If it’s a, well, typically you go with federal. You’re looking to get more charges out of that. You know, a longer sentence if that’s what you’re after, whatever it is, the punishments are more severe. So you typically go with the federal charges unless, of course, they plea down a little bit with you, make some kind of deal, then you’ll drop the federal and go with the state. Again, this is all just, you know, sometimes it goes this way, but in this particular instance, whatever it was, they decided to go with federal instead of state charges. That’s why Trump was able to pardon him. So now investigators say, well, since you pardoned him from the federal, we’ll just charge him at the state level. And here’s the problem if that is successful. Because again, they’ve already done the investigation.

They did the investigation, they know, they know they got him, but they also know they got them because the acceptance of a pardon, according to the United States Supreme Court is an admission of guilt. So if they walk in to charge him, he is effectively already pleaded guilty or admitted that he did it. Now he doesn’t have to plead guilty, but I guarantee you, the first thing that they would ever say if this thing went to a jury would be, did you know that acceptance of a pardon is an admission of guilt? Well, he accepted a pardon for what we’re charging him for, so. But therein lies the other problem, not with the pardon, but with the, he already got pardoned for what we’re charging him for. Suddenly you’re looking at double jeopardy and Cy Vance, the Manhattan DA who kind of kickstarted all this already knows a little bit about that. because Cy Vance tried to do the same thing with Paul Manafort and the courts threw it out because they said it violated double jeopardy. It was the same situation. Manafort got pardoned for the federal charges.

Cy Vance came back and said, okay, well we’ll charge you at the state level for it then and the courts threw it out saying, that’s double jeopardy. He got charged. Then he got, you know, convicted and pardoned. You cannot do it again. The law would appear to be on Bannon’s side right now. So unless, unless Cy Vance has an ACE up his sleeve and says, well, hold up, we didn’t charge you with this, which is totally possible. If he has that, he doesn’t have to worry about double jeopardy and he can effectively use the acceptance of the pardon as an admission of guilt. Then you got him. But if you come to court with the exact same thing that he has already been pardoned for, you’re going to get laughed out of there as you should, because it’s already happened to you once and you know better. But that’s why I think Cy Vance knows something we don’t because he already got smacked down for it once. He knows if he does the same thing, the same thing will happen. So I’m willing to bet he’s got an ACE up his sleeve and I can’t wait to see what it is.