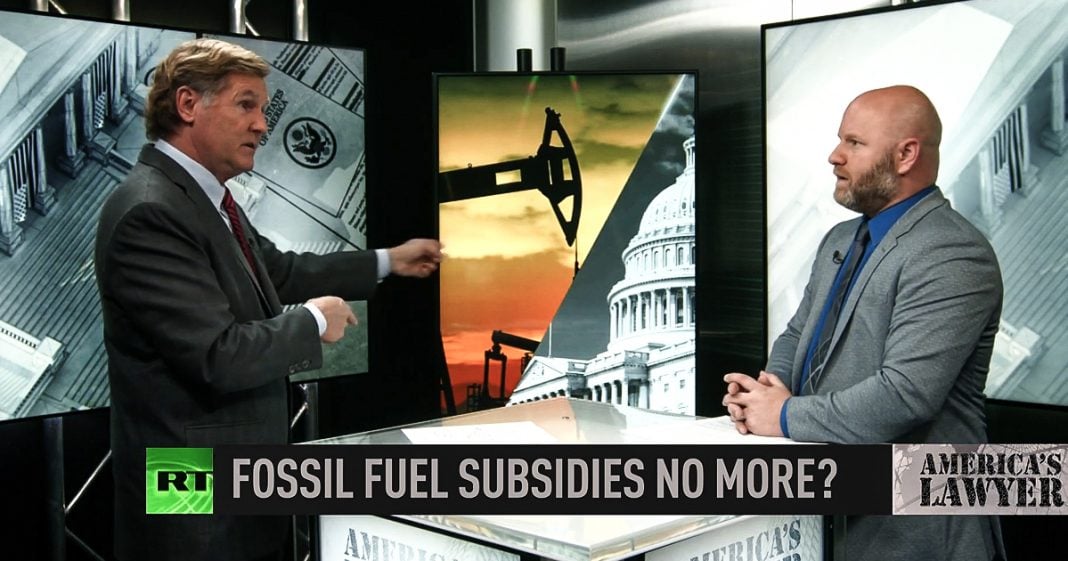 Mike Papantonio:             Last week, Joe Biden called on Congress to end fossil fuel subsidies, which have now topped $40 billion. I love this story. He says, I’m going to do something about climate change and by golly, he’s doing it. He closes down the pipeline, the disastrous pipeline. Now he comes and says, we’re giving all this welfare to the fossil fuel industry and we have to stop. This is what makes a president great. Okay. This could be his legacy.

Farron Cousins:                  Right. And this is an issue that Obama wasn’t willing to touch at all, going after the subsidies and, you know, I, I do like to point out the fact, you and I’ve been doing this for, for over 16 years. When we first started talking about this 16 years ago, the fossil fuel subsidies were $4 billion a year, couple of years after that, it moved to seven, then it moved to 12. Now we’re at 40.

Mike Papantonio:            You understand that’s primarily subsidies, that doesn’t really build in the tax loopholes. It doesn’t build into all that money off shore, hundreds of billions of dollars off shore. But you know what, the guy came to office and he said, I’m going to do something about it and by golly, he’s doing it. That was my biggest disappointment with Obama. Obama was going to come in and he was going to clean up Wall Street, remember?

Mike Papantonio:             Everybody was going to be arrested for what they did in the burndown. Didn’t do a thing. This guy, Biden, comes in and buddy he’s hitting the ground running. I just hope he keeps it up because it could be a great legacy for this presidency. And so to me, that means something that really means something when a president makes a promise and the first thing we do is we see him actually doing something. I, I hate his appointments.

Mike Papantonio:            I hate his appointments to the cabinet, but this makes up for a lot, right here.

Farron Cousins:                  It really does because what we’re finally seeing is some action, not just on the issue of climate change, but on the issue of in general, moving the country forward because that’s what has to happen with the fossil fuel subsidies. You have to end the subsidies and you have to let this industry go away in order to make room for the new renewable energy industry. And you do that by funding a jobs program, which needs to happen, get those fossil fuel workers into renewable. So there’s no loss of jobs. You can do this in a smart way and Biden so far, is moving the right direction to make that happen.

Mike Papantonio:             If that. This thousands of jobs is all smoke and mirrors. It’s not thousands of jobs. These folks that move out of this, out of the fossil fuel industry, they may not make as much at first that it’s not going to be a high paying job at first. But when the infrastructure is put together, it will be. And I believe this is a president that, you know, he’s got, he’s got John Kerry up there. Kerry is committed to it.

Mike Papantonio:             I’m just liking everything I’m seeing about this with Biden and I just pray he’ll have enough sense to keep it up and don’t get sidetracked with all the Wall Street appointments that we’re seeing him make to, to this cabinet right now.

Farron Cousins:                  Well, and you know, and, and another thing these workers need to understand too, if you leave the fossil fuel industry to go into, you know, solar, you don’t have to worry about your workstation blowing up.

Farron Cousins:                  In the middle of the day, like we have seen with the refinery explosions and the oil rig explosions. Suddenly the thought of maybe I’m not making it home tonight, you can have a little bit more peace of mind and that’s also worth it. You know you’re not working for the bad guys anymore. You’re making a better future and you’re going to live.

Mike Papantonio:             These are guys that have lied to us for decades and decades and they understood exactly what was happening with climate change. I love what this guy’s doing. I just hope he’ll keep it up.