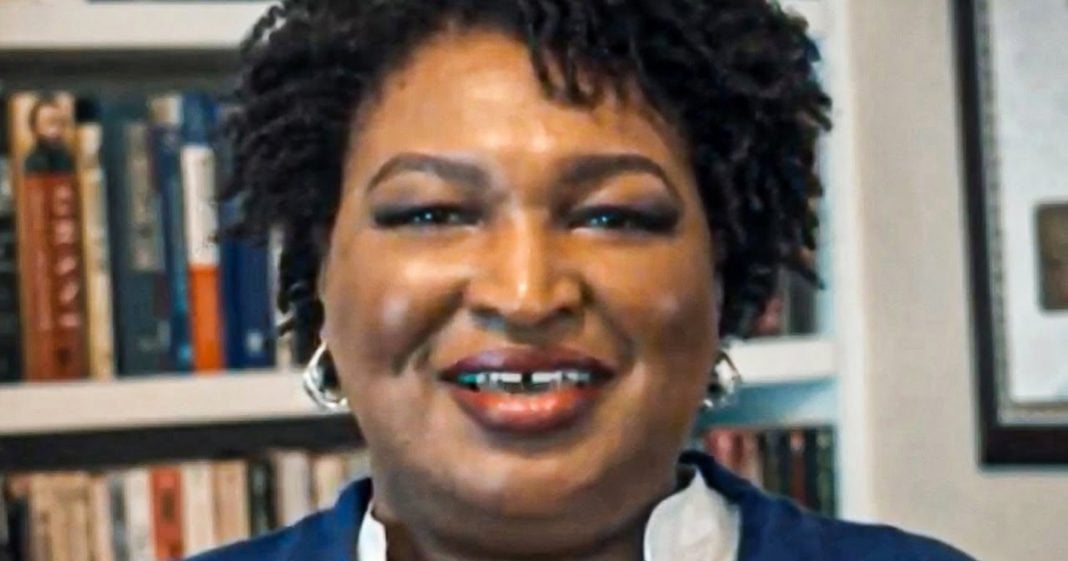 Stacey Abrams has Republicans in Georgia so terrified that they have now formed a group called “Stop Stacey” to prevent her from running against Governor Brian Kemp in 2022. Abrams has gained considerable influence and notoriety in Georgia over the past two years, and this group wants to end all of that. Their goals are much larger than just stopping an Abrams run, though, and Abrams will need all hands on deck to preserve what she has built. Ring of Fire’s Farron Cousins discusses this.

Republicans in the state of Georgia are panicking right now and they’re panicking over Stacey Abrams. They’re worried that not only has she helped to transform the political landscape of the state of Georgia, but also of course, that she’s going to want to run for office again in 2022 and then unseat Republican incumbent, incumbent excuse me, Brian Kemp. So allies of Brian Kemp and Georgia announced this week that they have started a new group that they’re dubbing at the moment Stop Stacy. And this is the group’s stated purpose, to expose her shady voter groups that undermine election integrity, and of course, to unite and mobilize grassroots Republicans across the country. They continue, we will do whatever it takes to expose Stacey Abrams’ radical network, highlight her dangerous agenda and ultimately defeat her and her left wing candidates at the ballot box. There is no time to waste. We must stand up, fight back and stop Stacy. Yes, her, her radical agenda of getting people to to vote. Listen, Republicans, um, I know paranoia is kind of a part of you.

I mean, it’s part of your identity. It’s who you are. There’s nothing sinister about what Stacey Abrams has done in the state of Georgia. She simply got people energized, educated and active. That’s it. I know it sounds small. It really is a Herculean task and that, you know, I don’t want to undermine anything Stacey Abrams has done, what she put together in the state of Georgia is absolutely transformational. It’s the kind of blueprint that Democrats in every single state in this country need to be following. And that’s why it has Republicans so scared because it’s not just about Georgia. It’s about every other state as well and they even mentioned that, you know, we gotta stop it nationwide. We got to prevent these candidates. We can’t let this spread because what’s spreading is actual democracy, you know, a democratic system in which more people show up to the polls, vote for the person they want to lead them and then they go back home.

That’s what it is. That’s what terrifies Republicans because as we all know, as we have said a million times, the more people turn out to vote, the worse it is for Republicans, the more likely it is that they lose. It’s exactly what happened in Georgia, not just in the November election, but in the special election in January. Georgia went blue as a state in November, both the Republican senators booted out, replaced with Democrats. So yeah, Republicans are panicking. Yes, Republicans know that Stacy Abrams did that and they understand that had it not been for Brian Kemp, then secretary of state in 2018 purging a couple hundred thousand people off the voting rolls, Stacey Abrams would be their governor right now. Which is ironic because had she won, she probably wouldn’t have been able to do all that grassroots organizing and Georgia probably still would’ve stayed red. So you kind of dug your own grave on that one and that’s the best irony of all.