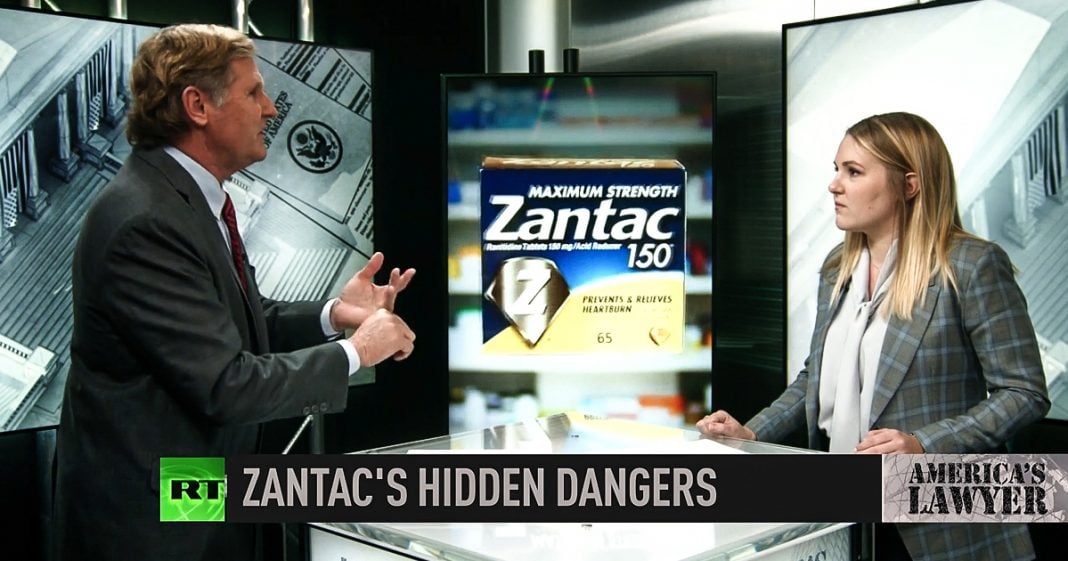 Via America’s Lawyer: Over 15 million Americans who take Zantac may be at risk of developing cancer. Attorney Sara Papantonio joins Mike Papantonio to explain litigation against the manufacturer, after studies revealed dangerous levels of NDMA chemical impurities which developed while the medication was stored in ordinary environments.

Mike Papantonio:             The popular acid reflux medication Zantac has been under heavy scrutiny for a lot of years after it was revealed that the drug has been contaminated with a chemical called NDMA and also that the drug was breaking down into dangerous components even beyond that. Joining me to talk about this latest Zantac is, the saga of Zantac, actually, Sara Papantonio is heading up that project, really in many parts of the country. Sara, first of all, give, start from the beginning. What is Zantac? Why should we be concerned about it?

Sara Papantonio:              Zantac was introduced into the market in the early 1980s, and they introduced it as this miracle drug that was designed to stop heartburn in its tracks. This was a hugely popular drug because it’s an over counter, the counter drug. And what that means is, you know, when you go to get it, you don’t have to have a prescription. You don’t have to go to a pharmacist, just walk right into a drug store and grab it. And we saw so much success with, with Zantac, it actually became a billion dollar drug.

Sara Papantonio:              The first of its kind in that annual sales. So what these manufacturers were seeing were dollar signs in their eyes. They weren’t seeing that this drug was actually poisoning people.

Sara Papantonio:              Absolutely. There is absolutely no question of whether or not there was knowledge here. We had scientists in the early 1980s before this drug was even developed saying, there’s a ingredient in this drug Zantac called ranitidine. Ranitidine breaks down when it’s exposed to high heat or temperatures or, or any type of exposure. They said, you need to watch this ingredient because it causes NDMA and that NDMA causes cancer. So there was no question. There were studies released over the 40 year period that Zantac was on the market that this NDMA would cause huge trouble for its consumers.

Mike Papantonio:             Well, is it, Sara, there’s also the part of it that’s the most bothersome. A person takes Zantac right. They, they get a load of NDMA. They don’t even know it. Most people don’t even know that the only use for NDMA is to test laboratory rats for cancer. They give the laboratory rats NDMA because it hurries up the process of cancer. Well, the, the public, I don’t think gets the connection between if they put that NDMA in their body and other DMA that comes from food. Talk about that just a little bit.

Sara Papantonio:              That’s the absolute truth. This, I mean, just to put this into perspective, this is a chemical that is used in rocket fuel, rocket fuel, and they’re allowing consumers to put this chemical in their body every single day, some over the course of this 40 year period that it’s been sold. Now, NDMA is a carcinogen that is so potent that scientists won’t even do a study, an epidemiological study on human beings, because they’re so confident that NDMA can be linked to cancer.

Mike Papantonio:             Okay, you’re doing, you’re handling the discovery. You’re getting ready for trial on this case. What is the most startling things that you’re finding about it? If you were just say, you know, if I’m looking at this across the board, this scares the bejesus out of me?

Sara Papantonio:              The fact that it’s so obvious that, that this, this NDMA and this ranitidine molecule, that it could have been identified that this was going to be a problem. It was so obvious and it was so easy for these companies to figure this out, but they just either turned a blind eye or knew, and just chose not to say anything about it.

Mike Papantonio:             Sara, are you seeing, I’m seeing some, some studies that talks about how the NDMA actually modifies DNA, that is really scary. It modifies your natural DNA and creates cancer. Is there truth to that? Are the studies there?

Sara Papantonio:              So what we’re seeing with NDMA is that it’s causing what we call DNA fragmentation and it’s exactly how you described it. The NDMA is reacting with the cells in your body, and it’s taking a healthy cell and it’s turning it into a cancerous cell and because NDMA is so potent, that cancer is growing at an alarming rate. It’s causing all kinds of cancers. We’re seeing liver cancer, gastric cancers, lung cancers. It’s so alarming, just how potent and you know, and how quick this NDMA reacts to the body.

Mike Papantonio:             Yeah. In other words, it’s not even a law, it’s not even a latency period to it, sometimes it’s immediate. Look, here’s my advice. Don’t take Zantac. Do away with Zantac. Pepcid, no showing on Pepcid doing the same thing. It’s a good alternative, Pepcid is something I tell when people ask about Zantac, take Pepcid. They got the tablets, chewable tablets and the pills. I hope you go after them hard. I know you will. When will you be in trial?