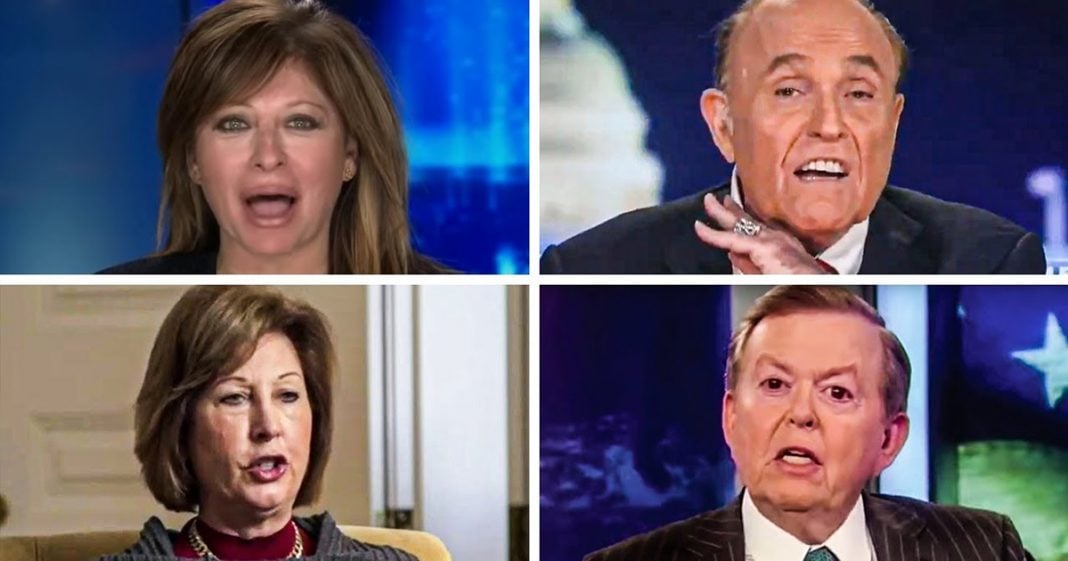 Donald Trump’s election lawyers and some of his favorite Fox News hosts have been hit with a massive $2.7 billion defamation lawsuit from voting software company Smartmatic, after the named individuals in the lawsuit spent months making baseless accusations about the company. Rudy Giuliani, Sidney Powell, Lou Dobbs, and Jeanine Pirro are all targeted in the lawsuit, and the case is pretty clear based on the available evidence. Ring of Fire’s Farron Cousins discusses this.

Some of Donald Trump’s closest friends and allies, including some of those folks at Fox news, have now been hit with a $2.7 billion defamation lawsuit for the lies that they’ve been telling for the last several months about voting technology company Smartmatic. Now this is not the lawsuit brought by Dominion Voting Systems against Giuliani and Sidney Powell, although both Powell and Giuliani along with Lou Dobbs and, is it a Jeanine Pirro, I believe, yes, Jeanine Pirro and Maria Bartiromo from Fox are all listed in this new Smartmadic $2.7 billion. So Giuliani and Powell have their own $1.3 billion lawsuits a piece. Now they’re all lumped into this $2.7 billion. So all told, their lies about all of the alleged voting irregularities that didn’t actually happen in the 2020 election could end up costing all of these idiots $4 billion, actually $5.3 billion.

So, that’s interesting, right? Here’s what’s happening here. Obviously Dominion Voting Systems is the one that has been the main focus of it, but the deeper you dive into the conspiracy here, it, they had been telling us that it was both Dominion and Smartmatic working together to somehow steal the election. The only problem is these two companies weren’t even working together. First and foremost, obviously they’re not the same company. Dominion, however, in the States where Republican said Dominion was working with Smartmatic, the two did not have any kind of partnership. So you’re not seeing Dominion Systems running Smartmatic technology, that didn’t happen, Republicans said it did. The other thing they said was that Smartmatic was some kind of Venezuelan OP to undermine democracy here in the United States, that Hugo Chavez, who has been dead for many years, he was somehow driving the train on that one, perhaps from beyond the grave and so then Smartmatic with their technology flipped votes, you know, because dead Hugo Chavez wanted that from Trump to Biden.

So dead Hugo Chavez wins, I guess. Smartmatic much like Dominion had sent letters saying, hey, um, you’re lying about us and you’re lying about us in a way that’s going to cost us a lot of money if you don’t, you know, retract this. Publicly do so and we won’t sue you, fail to do so, and we’ll see in court. They failed to do so. So again, now you have Lou Dobbs, Maria Bartiromo, Jeanine Pirro, Rudy Giuliani and Sidney Powell slapped for a $2.7 billion lawsuit, because as it turns out Smartmatic is not a Venezuelan company. The two guys who founded it are from Venezuela, but they were living in Florida when they founded this and no, they have no ties whatsoever to the Venezuelan government. They just happened to be born in that country and then left that country, came to the United States, started a successful business. Isn’t that kind of the American dream? So that’s what happened. That’s the lies being told and that’s why these idiots are now facing a $2.7 billion defamation lawsuit, because they couldn’t just accept the fact that their guy didn’t win the election.