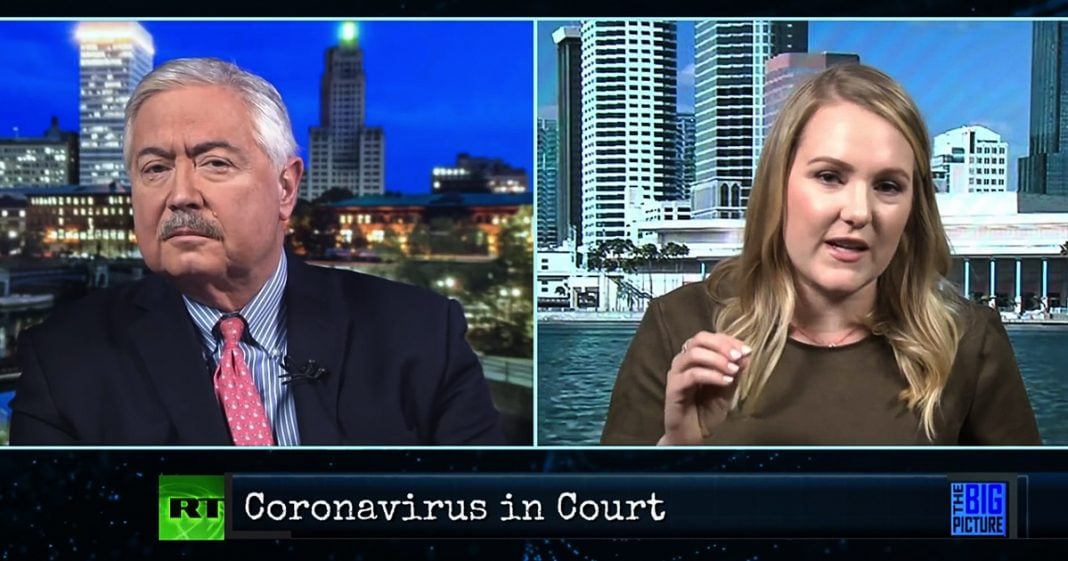 Via The Big Picture: Will we see a tidal wave of insurance claims filed by COVID-rattled businesses? Attorney Sara Papantonio explains how firms are turning their backs on policyholders, citing the pandemic as a widespread interruption that simply can’t (or won’t) be covered.

Holland Cooke:                   Has your dishwasher died from overuse? Are you having trouble replacing it? Are you having trouble finding home exercise equipment? Almost every industry has suffered supply chain interruptions while we’re all in stay at home mode and demand changes have many industries at death’s door example, movie theaters. Poetically, No Time To Die is the James Bond thriller that sat on the shelf for two years now and Hollywood is just one business sector in which companies on the edge, or are on the verge of the edge, are taking legal action against insurance companies who sold them business interruption insurance.

Ty Childress was lead lawyer for world trade center properties during the 9/11 insurance litigation aftermath and he tells the Hollywood reporter that there are well over a thousand coverage cases across the country already. And we’re still in act one of the play. There are exponentially more policy holders in the claims process right now. You know what happens if you miss an insurance premium payment, but will insurers get away with what could be a cascade of claims that they stiff? Let’s ask attorney Sara Papantonio from the Levin Papantonio law firm in Pensacola. Sara, fundamentally, how does business interruption insurance work?

We’ve got the all risk policies and what that means is that all losses are covered unless the insurance company has specifically stated that it’s not covered. And what we found is that many insurance companies don’t have a specific exclusion for their policies for pandemics, which means that with COVID-19 these businesses should have coverage. Now, the second type of policies we’ve seen are the ones that have language that’s far more restrictive about coverage, especially in terms of this pandemic. Now those policies are required that businesses suffer what we call a direct physical loss as a result of some unforeseen event. Now the legal question then becomes with COVID-19, is a virus a direct physical loss to a business and should these insurance companies have to cover our business losses?

Holland Cooke:                   As I have read about this, the insurance industry’s position, seems at least to this layman to be cry uncle. The insurance information institute represents some of the biggest insurers in the world and their spokesperson says pandemic related losses are generally uninsurable because they hit all businesses and all at the same time. And if every business in the country is affected by the same catastrophe, the insurance companies don’t collect enough money to pay that out in losses. So they exclude it. Sara, be the plaintiff, what do you say to that?

Sara Papantonio:              They’re telling the American people that they don’t have enough money. So then why have hardworking Americans been paying these high premiums month after month, year after year only to be told by their insurance company, sorry, we don’t have enough money to cover the very loss that you have been paying us to cover all this time. Holland, the very reason we have insurance companies is to support us, to help us rebuild and to work through hard times. And what these insurance companies are doing is turning their backs, trying to save themselves rather than actually providing the insurance for the, the clients that they promised they would.

Holland Cooke:                   One big reason for continuity of business insurance is continuity, the ability to keep employees on the payroll during a shutdown and this is acute for the mom and pop businesses who are bearing the brunt of these pandemic protocols. We see how much trouble restaurants and bars are having and how these owners agonize about letting people go, bringing them back, only to have to let them go again. Sara, in David versus Goliath cases, do juries tend to favor David over Goliath, the big guy, or is that a caricature?

Sara Papantonio:              Well, unfortunately we’re not, we’re not really going to see a wave of successful verdicts across the United States. And when we’re talking about juries, what we have to look at is what we call a reptilian thought processing and that, what that means is that when juries are evaluating a case, what they think about when they’re making this decision, isn’t, you know, the facts in front of them, it’s how it’s going to affect them in the long run. And what insurance companies have done so well at is what they, they, they pushed this narrative that juries, you know, that if they award big verdicts, that in the long run, it’s not going to help mom and pop, but it’s going to hurt them because it’s going to raise their premiums.

So while, you know, we hope that that juries will, will rule in our favor, what it really depends on, what it comes down to is where these cases are being tried, because it fundamentally depends on the location in which these are being tried. If juries are more in an area where they’ve suffered catastrophic disasters, then what’s going to happen is they’re going to see firsthand how insurance companies are taking advantage of them.