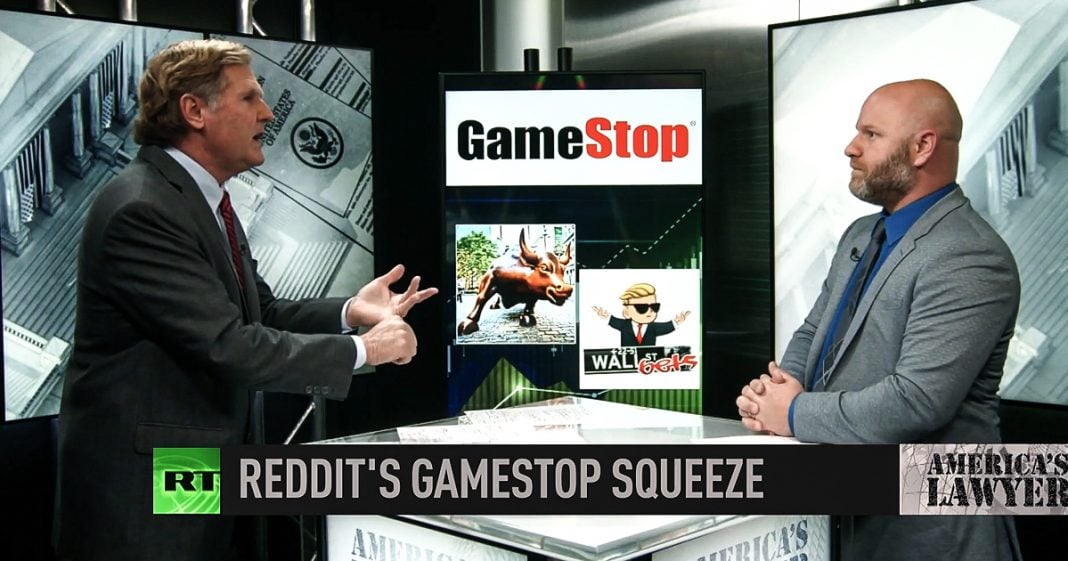 Mike Papantonio:             A group of rookie investors from the internet managed to beat hedge fund managers at their own game last week and this has sparked a major upheaval in the stock market and how it operates. I have Farron Cousins here to talk about it. I love this story, you know, to me, it’s economic populism. Okay. How many times have we done stories, Farron, when we talk about these swine at the trough, you know, Wall Street, you know, just every time they can figure out how to squeeze a nickel out of taxpayers or out of mom and pop investors, they do that. This story really tells it. They were trying to crush, Wall Street hedge funds were trying to crush GameStop because they wanted to make money on the back end. Not for any good reason, except pure greed by Wall Street. Take it from there.

Farron Cousins:                  Right. You know, we, we’ve talked at length over the years about all these hedge fund managers and they, they really do make tens of thousands of dollars an hour doing things like this. And it’s a game, it’s a rich people’s game, but it’s super, super billionaire rich people’s game. So you’ve got folks from Reddit who stepped in, they understood enough about the game to say, listen, we’re watching what they’re about to do to GameStop here. But if we all band together and we buy this stock, we drive the price up. They lose all their money because they short sold it and they were trying to get it back. We can do this. Let’s just, you know, a couple dollars a piece and they did it. That’s the great thing about this and it’s not just about, oh, hey, this is a fun gag. These are the same people that understand they’re being left out of the game. That the whole system is fake and rigged.

Mike Papantonio:             Day in and day out little characters like right there on Wall Street are trying to figure out how to scam the American public. They do it with massive computer trades. You have these cats coming out of MBA school at 25 years old thinking I’m going to get rich quick. They use a computer program to do it and one thing, one way they do it is with selling short. That is where basically they borrow a share. Okay. They, they borrow a share from another source. They sell the share. And when, and then, when it all starts happening, they buy it back and that shorts puts a company like GameStop out of business. They, they tried it with Air, American Airlines. They’ve tried it with, with Blackberry. I just hope they lost billions of dollars and I hope this populism, because people can do this now.

Farron Cousins:                  So we’re going to shut you down. Congress, you know, is looking at this and only a handful of them are saying that they agree with what happened to these head fund managers. So that’s scary. Elizabeth Warren, she’s on the side of Reddit, Bernie Sanders, we know he is, but the rest of them are saying, well, maybe we need to regulate this so people can’t.

Mike Papantonio:             And, you know, when you get, when the, when the market gets like that, it’s dysfunctional. So this correction, it could be, I’m telling you it could be economic populism in the truest sense and this argument, oh gee, this conduct caused the market to slide two points. I don’t care. Whatever it takes. I’m in the stock market in a big, big way. I don’t care. I would rather see the American public fight these freaks back rather than them stealing from mom and pop, stealing from taxpayers, with things like the tech bubble, things like the mortgage bubble, where we went and bailed them out because of this same kind of thing. I love this story. I love this story.