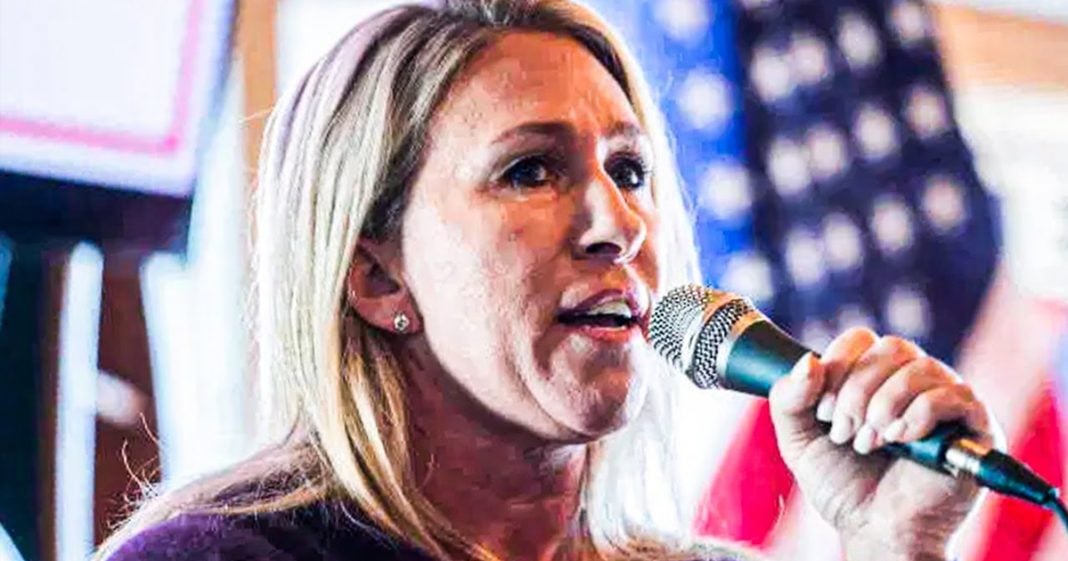 Republicans in the House have agreed that the best course of action to take against Marjorie Taylor Greene is absolutely NO course of action, and they won’t be disciplining her in any way. Democrats are now taking it into their own hands and they are hoping to pass legislation that will strip Greene of all of her committee assignments. Ring of Fire’s Farron Cousins explains what’s happening.

Yesterday during their little super secret closed door meeting, Republicans decided that they would not in any way be issuing any kind of discipline to representative Marjorie Taylor Greene for all of her extremism, her pushing of conspiracies, her involvement with Q, none of that was too extreme for today’s Republican party. At the same time, contrary to what people like Matt Gaetz would have you believe, they also failed, the extremists in the party, the Trump loyalists failed to kick Liz Cheney out of leadership positions and in fact, according to Adam Kinzinger that vote was overwhelming. The Trump people got destroyed in that vote, as Kinzinger put it. It was secret ballot. So nobody had to, you know, justify their voting and let’s just say the Trump people found out they really are the minority in the Republican party, at least in Congress.

Unfortunately though, again, no punishment for Marjorie Taylor Greene, she in fact got a standing ovation during that meeting. So what happens now? Everything just goes along fine. Nobody can do anything. Well, typically it is up to the individual party to determine whether or not they’re going to strip a member of their committee assignments and the Republicans decided yesterday not to do that. So the Democrats said, well, you know what, screw it. We’re going to do it ourselves. So the house rules committee, drafted legislation that would strip Marjorie Taylor Greene of her committee assignments effectively making her only a yes or no voter in Congress, which is a huge deal. She has no authority of any kind. She would not sit on any committees. All she could really do is vote yes or no on full floor votes.

That bill, that piece of legislation to strip her of this, passed committee, passed on a party line vote, but it passed. It will now go to the full house floor for a vote where it is obviously expected to pass because there’s more Democrats than Republicans. And that would effectively strip Marjorie Taylor Greene of any authority she may have in the house of representatives. Now, the question is, if this happens, does this create sympathy for her? You know, expelling her would be the best option, but Democrats do not have the numbers to do that. You got to have two thirds, much like a conviction of an impeachment trial in the Senate, got to have the two thirds. They don’t have the two thirds. So they can’t actually kick her out. All they can do is strip her of her power and just leave her sitting there waiting for full floor votes where she says yes or no.

But is this going to off the voters in Georgia who elected her? You know, are they going to be more inclined to elect her in the future because they think she has been unfairly targeted by Democrats. That is a real possibility. Hopefully those voters who looked at her and said, yes, I like that, hopefully they’re waking up a little bit and they understand that, oh my God, we put a crazy person in the house of representatives. Because if not, all they’re going to do is put her back in there in two years and then we’re going to have to go through this whole thing again of Democrats, you know, maybe then they won’t even try to strip her of her committee assignments. She’ll get assignments and then she’ll actually have power. Who knows what the future holds? But one thing is for certain, we wouldn’t even be having this discussion today if the Republican party had done their job and held her accountable. Can you imagine what they would do if a Democrat had said the things that she had said about Republicans? I mean, they would already be having full on, you know, witch burnings, if a Democrat had done that.

That, that’s, that’s the point we’d be at, but when it’s one of their own, oh no, we get to have a super secret meeting. You can’t see what happens. I don’t want you to see the standing ovation. It’s a secret ballot. So we can’t even hold people accountable for how they vote and oh, no, we decided we’re not going to do anything about it. Because that’s the Republican solution to everything, screw it, we’ll just let other people deal with it. And that’s exactly what’s here Happening now and they’re probably not going to be happy with the outcome of what happens with Marjorie Taylor Greene, because Democrats are doing what Republicans could have had the courage to do. Republicans could have been the ones who said, listen, this woman’s a little much, even for us. So we handled the issue. You’re welcome America. But they were too stupid to realize that they could have been the good guys in this story. Instead as usual, they get to be the villains again.