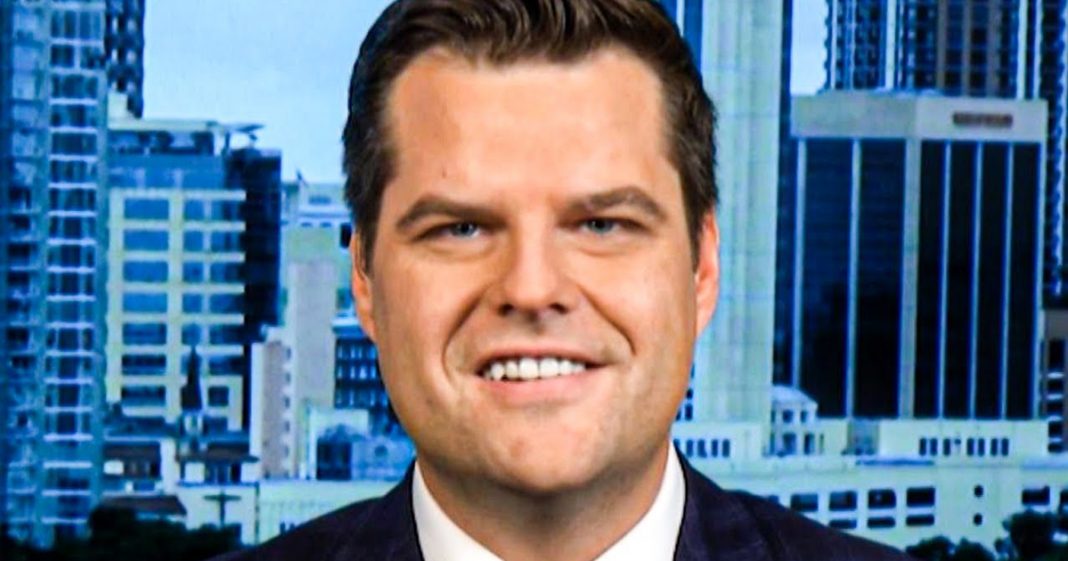 Republican Representative Matt Gaetz took his devotion to Donald Trump to an entirely new level of creepiness this week when he proudly announced that he would be willing to resign from his House seat in order to represent Trump at his impeachment trial. Not only should this make it clear to Florida voters that he doesn’t care about them, but it also shows that Gaetz clearly has an unrequited affection for the President that is not reciprocal. Ring of Fire’s Farron Cousins discusses this.

Republican representative Matt Gaetz from my district here in the state of Florida, did something phenomenal yesterday that actually may Democrats across the country cheer. They celebrated this proposal from Matt Gaetz because let’s be honest, this is the greatest thing that Matt Gaetz has proposed since he got to Washington, DC. On Steve Bannon’s podcast, Matt Gaetz openly proposed resigning from his seat in Congress for the opportunity to represent Donald Trump as his lawyer in the impeachment trial next week and absolutely, not just as somebody on the left, but also as somebody who is one of Gaetz’s constituents, I wholeheartedly endorse this idea. Oh, this is a win, win, win for every single human being on this planet who isn’t a member of the MAGA cult. Look at it this way. First and foremost, we get Matt Gaetz out of Congress, hooray, that is awesome. We get to have our special election down here in Florida’s first district and sure you’re going to get a Republican. But the vendetta against Matt Gaetz is not just because he’s a Donald Trump sycophant and a dangerous individual.

For me, it is a little bit more personal, but either way he needs to go. So yeah, that’s a great way to get him out of there. Number two, do you know how much experience Matt Gaetz has actually trying cases? Yeah, under three years and that was over a decade ago. The guy graduated law school in 2007, won his first election to the Florida state house in 2010. So he has, assuming he got a job fresh out of law school and assuming he obviously couldn’t work on cases while he was campaigning to be in public office, you’re talking about no more than two years of actual legal trial experience. And if Trump wants to go with that, hell yeah, I don’t see how that could backfire. That’s what you want, right? For an impeachment, you know, that determines your fate for the rest of your life. Sure, you want somebody who maybe tried cases for two years, more than 10 years ago. Giuliani had been out of practice for 14 years and we all saw how that played out for Donald Trump.

So I’m sure Matt Gaetz after only two years of experience 10 years ago, actually 11 years ago. Yeah. I’m totally sure that’s not going to backfire on anyone, but here’s the group that needs to what is actually happening here. Oh, by the way, let me just go ahead and read the quote from Gaetz. If the president called me and wanted me to go defend him on the floor of the Senate, that would be the top priority in my life. I would leave my house seat. I would do anything I had to do. You sound like a teenage girl talking about the frigging Jonas Brothers, like, oh my God. Oh my God. If they called me and they were like, hey, come on tour with us and be our girlfriend. I’d be like, oh my God, I’m so there. I’m so there. I would leave my family. I would leave my cat. I would go and I would be with them 24/7. That’s what Matt Gaetz just did. And in his statement there, this is my final point, in his statement there, he let all of us know, all of us, his constituents, me, my family, all the right wing neighbors my, my guy over here with the Trump flag still in his yard, he let all of you know that he doesn’t give a about you.

Doesn’t give a about this district. All he cares about is how can I get closer to Donald Trump, physically and emotionally, like physically in proximity. That’s as far as we know, because this is creepy as hell. This is creepy as hell. This is like stalker level here, folks. Like I would leave everything behind. I’ll do whatever it takes. Donald, let me in your life. I’ll leave my job. I’ll leave my family. I know I just got engaged, but I’ll leave her for you. Please accept me, Matt Gaetz, as your whatever the hell it is you want me to be because that’s how obsessed he is. Matt Gaetz should probably be in a padded cell. If you ask me, I think that’s where he belongs based on his behavior here. Because this is disgusting. This is obsession and if I were Donald Trump, I would probably try to get as far as hell away as possible so I didn’t ever have to be in the same room with this creepy North Florida guy, ever again.