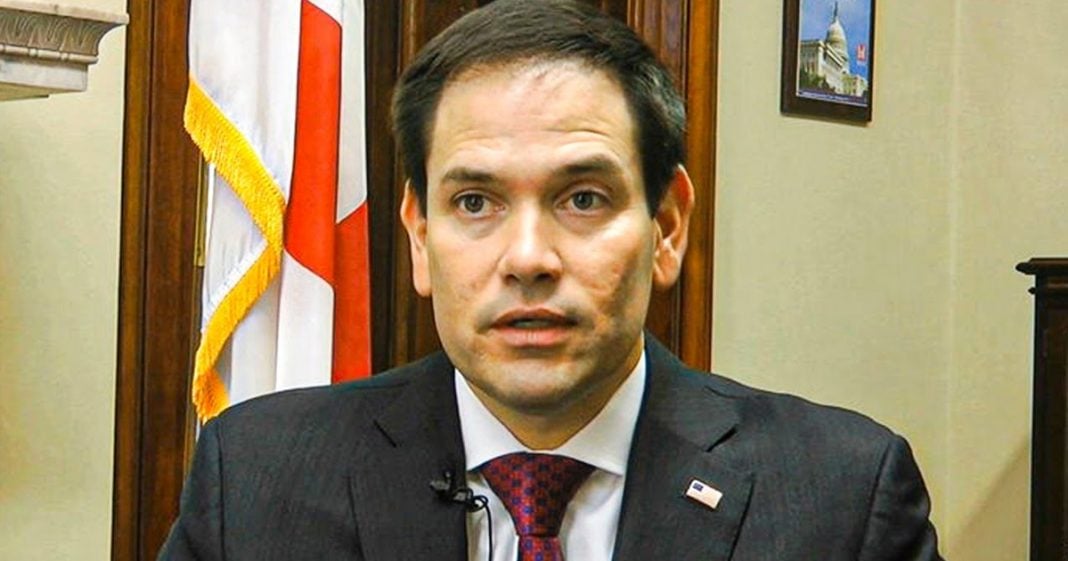 Republican Senator Marco Rubio got roasted on social media after making an idiotic statement about Marjorie Taylor Greene (where he was too cowardly to even say her name.) Rubio said that the media was exaggerating the situation, but the truth is that the media isn’t giving enough attention to the issue and the insanity from this member of Congress. Ring of Fire’s Farron Cousins discusses this.

Republican Senator Marco Rubio once again showed the country why he is in fact, the dumbest member of the United States Senate and he did it by actually blaming the media for this entire Republican Marjorie Taylor Greene fiasco. Here’s what Marco Rubio tweeted out this week. He said, quote, reporting that a politician believes in or flirts with conspiracy theories is legit, but the attention they get should be proportional to their ability to influence actual public policy. Don’t make them famous, help them raise money or elevate conspiracy theories. Um, don’t make them famous. Don’t elevate their theories and don’t, don’t help them raise money. Dude, isn’t that what your party literally does with people like that? I mean, you’re, you’re making her famous because members of your own party are not holding her accountable and they’re actually coming out and defending her. She’s a part of the Republican party. So she gets some of that fundraising apparatus.

She herself actually sent out an, a message on Twitter saying that she’s raised a ton of money because the Republicans are using this to raise money, claiming look how much the Democrats hate us. Obviously we’re moving in the right direction, give us more money. That’s, that’s how it works with your party. But most importantly, dude, the media is doing exactly what they should do. They are publicly shaming, not just her, but your entire party you idiot because that’s what they have to do. And even with all of that public shaming, even with all of the media’s attention, you and your party have done absolutely nothing. They had the big meeting yesterday in the house of representatives and walked away saying, well, guess we’re not doing anything about that, you know. Yeah, we, we see the cancer here as Mitch McConnell called it, but, uh, let’s just see how far it can spread, right?

What’s the worst thing that can happen letting a cancer go unchecked? Smart, but Rubio, that’s your party. That’s who you are. That’s what you are and you can’t sit there and blame the media for talking about this. If the media wasn’t talking about this, she would still be in the same position, except she wouldn’t be getting kicked off of her committee assignments. She would have more power if the media wasn’t talking about this. The reason you don’t like the media talking about this Rubio, and this is what everybody pointed out on social media, because you’re very transparent because you’re not very good at this is because the more the media talks about it, the more the public understands how extreme the Republican party as a whole has become. They know that Marjorie Taylor Greene is not an abomination. She is not an exception. She is becoming the new normal.

And while you may not find any other people in Congress who are as extreme as her, you can certainly find people who are on their way to being as extreme as her. Your Gaetz, your Jordans, your Boeberts, your Gohmerts. Yeah, she represents the new face of your party, Marco. Remember many years ago, the cover of Time Magazine, I think it was, you know, the savior of the Republican party, that was you. They thought you were going to be the new face of the party, but you proved too dumb to be able to hold that mantle. Your little water fiasco, where you, you know, giving your rebuttal to the state of the union, that was supposed to be your big opportunity to show the world you were a leader and you failed. Then when you ran for president in 2016, Chris Christie ate you alive, which is not that unusual for somebody like Chris Christie.

And ever since then, your career has been going down the toilet. So I understand you don’t want people to see how extreme the Republican party is, because if they do that just might hurt any future endeavors you may have. But at the same time, I think there’s a twinge of jealousy here, Marco, because you wanted to be the face of the Republican party. But instead now you see these newcomers crazy as they are getting all the attention and part of you wishes that attention was back on you. So you go on Twitter, you say stupid things and you get the attention you craved, just not in the way that you wanted it.