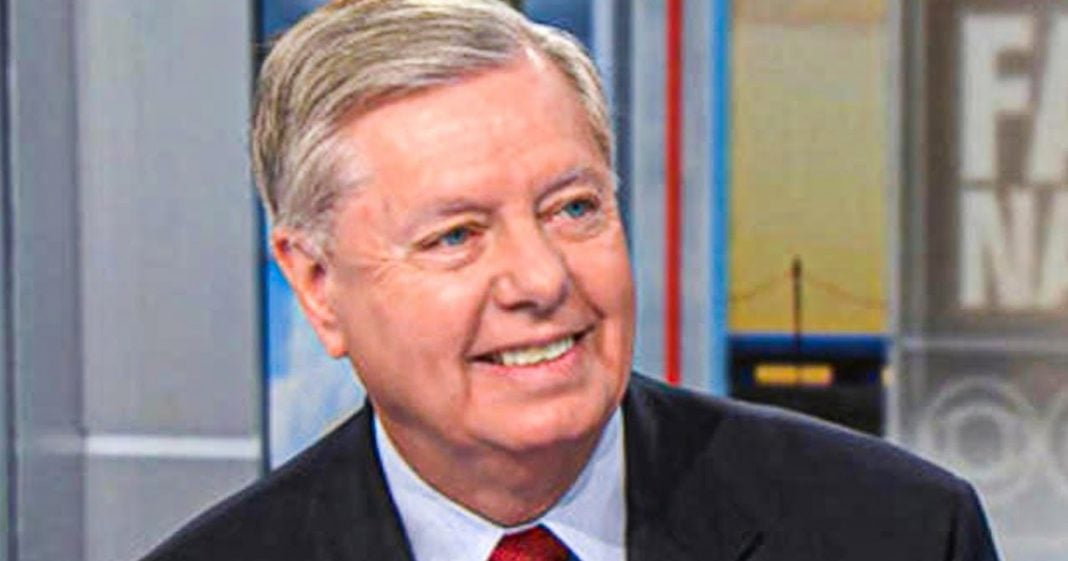 Republican Senator Lindsey Graham isn’t very good at making threats, and that’s likely why he thinks he can make the impeachment trial all about Vice President Kamala Harris. Graham says that SHE is the one who actually incited violence, then went on a tear about something that is incredibly dubious and stupid. Graham is frightened by women, apparently, and he thinks everyone else is, too. Ring of Fire’s Farron Cousins discusses this.

Earlier this week, Republican Senator Lindsey Graham went on Sean Hannity’s program on Fox news, where he talked about the Republican strategy for Donald Trump’s upcoming impeachment trial and man, it is absolutely one of the dumbest things we’ve ever heard. Lindsey Graham next week, once the Senate trial convenes, wants to make the trial all about vice president Kamala Harris. That is what he told Sean Hannity. Here’s what he had to say in his own words, if you’re going to pursue this and you want to start calling witnesses and you want to drag this thing out, it would be fair to have Kamala Harris’s tape play, where she bailed people out of jail. What more could you do to incite future violence than to pay the bail of the people who broke up the shops and beat up the cops? It sounds like a Dr. Seuss book there. How’s that not inciting future violence?

Be careful what you wish for my Democratic colleagues. Be careful what you wish for. Lindsey Graham is afraid of women and I firmly believe that he is afraid of women in more ways than one and you can infer from that, whatever you want. But Lindsey Graham clearly is terrified of vice-president Kamala Harris. Why, why go after her here? Why? Because you believe women are weak and you believe this is an easy tactic to distract the public because the tape, now here’s the other part of the story here, there’s no fricking tape. It’s getting harder and harder to self-censor because I’m getting so angry with these morons. There’s no tape though. This tape he’s referring to where she’s on, on tape, bailing people out of jail, none of those things ever happened. Those aren’t real events. Those are weird little fantasies playing out in Lindsey Graham’s head. What did happen, however, is sure, over the summer, Kamala Harris tweeted out a link where you could donate money to the bail of some of the protesters who’d been arrested.

She never said she gave money. She sure as hell isn’t on tape personally bailing them out as, as Lindsey Graham says. So nobody’s really sure exactly what you’re talking about here, Lindsey, which is usually the case because you’re pretty fricking stupid. And I know it sounds rather Trumpian just to constantly refer to these individuals as morons and idiots and stupid, but my God folks, that is what the Republicans have sent to Washington, DC. Honest to God, look at each and every one of these individuals, look at Lindsey Graham and tell me that this guy isn’t a brain dead moron, same thing with Marco Rubio or Matt Gaetz. These people are absolute bottom dwelling, drooling, buffoons, who somehow failed their way up and ended up with more power than you and I could hope to have. If you want to make next week’s impeachment about vice president, Kamala Harris, bring it on, dude, bring it on.

I am not the biggest Harris fan and in fact, I think it’s funny that you’re actually trying to paint her as some kind of person with empathy for criminals, you know, based on what we saw out of her from being California AG, yeah, if you want to paint her in this much better light than her actual record suggests, be our guest. But the truth is, dude, you need to be careful what you wish for, because if you want to take us down some other roads, I’m sure there’s plenty of other roads that you don’t want Democrats to start going down. Am I right? Everybody in that Republican party’s got some skeletons in their closet. And if you just want to have a big old dish session where it all comes out, then keep pushing because I’m sure the Democrats would love to make next week all about that.