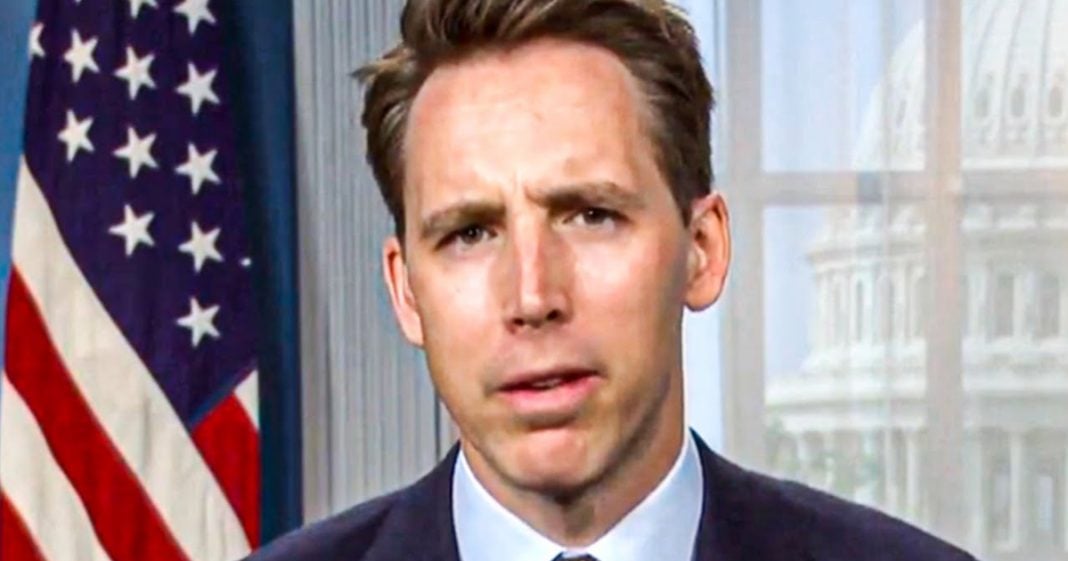 Josh Hawley believes that a few symbolic votes against President Biden’s cabinet nominees are going to win him extra points from the lowbrow Republican base, and he is now the only Republican to vote against every single one of them. This actually isn’t a bad political strategy, but it may not be enough to thrust Hawley past his disgusting behavior of the past month. Ring of Fire’s Farron Cousins explains what’s happening.

Republican Senator Josh Hawley still believes that he can win the public back or at least win enough of the Republican base back to have a successful 2024 presidential bid. And this week, he, I don’t know if you’d call it made history, but certainly made something of himself by voting against every single one of Joe Biden’s cabinet picks. He is the only Republican to vote nay on every single cabinet pick that has come before that Senate. I believe there’s been seven, yesterday he voted against Buttigieg, who is the first openly gay cabinet appointee. And he also voted against Alejandro Mayorkas, the first Latina and first immigrant to be confirmed as the Secretary of Homeland Security. He also voted against Lloyd Austin, who is the first black person to be the Secretary of Defense. So Hawley’s like, hey, it’s cool you’ve got this super diverse cabinet. I don’t care.

I don’t care that I’m voting against the, the first openly gay person, the first black person for Homeland Security, first Latina. I don’t care. I’m going to vote against all of them. And to be honest, on the Republican side, probably not a bad strategy. I know it sucks to kind of hear that, but we have to remember, we’re dealing with a lot of close minded people on the right. So this actually probably is a plus for Hawley, not to mention he is going to run ads. I can promise you he is going to run ads bragging about the fact that Josh Hawley was the only Republican who voted against every single one of Joe Biden’s extreme liberal socialist cabinet. That’s going to be an ad with some variation on those words, socialist will be in there, I’m sure. Extreme will be in there, we just don’t know what, what order they will be. That’ll be an ad that Josh Holly is going to run if he runs for president in 2024, I guarantee it, mark it right now on your calendars. I called it.

That’s going to be a thing that happened and that’s why he’s doing it, to be honest. They have no real objections to any of these people. Most of the people Biden has put in there are very conservative Democrats who are, who are pretty much going to do what Republicans want to do. So it’s not like they have any real reason to object to these individuals other than trying to score some brownie points with their close minded base. And Hawley now has the upper hand because his base, most of them are not going to care about what he did back in January. You know, they’re not gonna remember him giving the fist of solidarity to all those people who were just about to storm the Capitol. Oh, that image will go around, sure. But it’s not going to land and it’s not going to stick because most of them actually like that.

And this him running ads now that are probably going to say, like, I voted against all of them, they’re going to like that because no matter how conservative Joe Biden is, no matter how liberal he is, no matter what he does, every Republican in 2024 is going to be running against socialist Joe Biden. So it doesn’t matter. Nothing matters. Because they’re all going to call him socialist. Their base is all going to believe it because they don’t know what the word socialism means and that’s their great boogeyman now. They’ll probably also be running against Pelosi in every ad. They did this year. They’re going to do it again again and Hawley again now has the upper hand of saying, listen, I never once tried to make peace with him. I never once gave him anything he wanted. I was the only one who fought all the way till the end and the saddest part is that’s going to work pretty dang well with that Republican base.