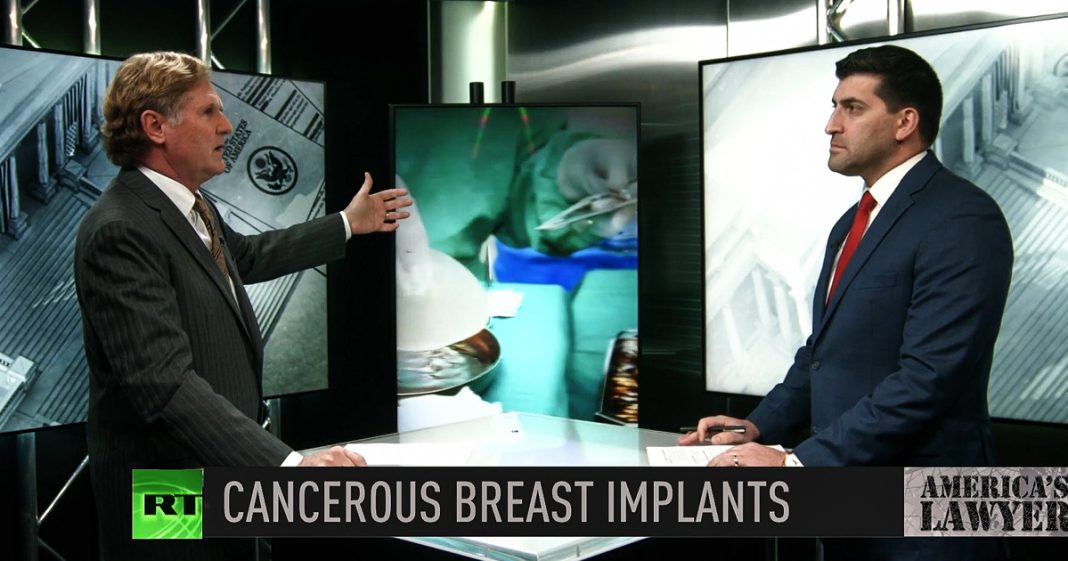 Mike Papantonio:             Breast implant recipients are at an increased risk of certain forms of cancer and multiple scientific bodies have come forward and they say, this is dangerous. Don’t do it, get it off the market and they were very clear about it. Steve Luongo goes here to talk about it. Steve’s, Steve, you’ve involved in all types of litigation. This is a case I handled the first round, when the first round of breast implants were out there and I tried some of the first test cases, back then we knew how dangerous this was. But what’s the new danger?

Stephen Luongo:               Well, right now the new danger is with the textured breast implants and what people are finding through the research and the committees that you spoke of, is that these textured breast implants are either causing cancer through the scar tissue that’s being formed in the scar package or capsule is what they call it or through a bacterial infection from the surgical site. That’s what they’re finding.

Mike Papantonio:             Yeah. What we found the first go around, Steve, was that the, you had migration of the silicone, you had deterioration of the silicone packet and it was causing auto-immune disease, scleroderma. It was causing serious, serious Raynaud’s syndrome, a whole host of auto-immune disease. Plenty of women died because of it. And we were able to get it off the market and, and so all of a sudden, just like usual, everybody forgets about it, it’s back on the market. Right?

Stephen Luongo:               Absolutely. And, and what we’re dealing with in this particular litigation is the textured breast implants compared to what’s also known as the smooth surface textured breast implants. And what we’re finding is that there’s a specific type of cancer that’s being developed by these women who have had these implants, which is anaplastic large cell lymphoma, a non-Hodgkin’s type of lymphoma cancer. It’s being developed when they’ve had the implant for about eight to ten years. So it’s not something that’s readily available. It’s not something that comes up right away, but it’s something down the road that they’re being impacted with and obviously results in serious conditions.

Stephen Luongo:               Right. And that, that’s an issue as well. Doctors should be warning patients because these conditions are known. The litigation’s been going on for several years, as well as scientific committees, such as the world health organization, the FDA, they’ve been releasing statements to the public identifying, educating the public about these known effects. All 33 European nations have taken the Allergan textured breast implant off the market.

Mike Papantonio:             It’s Allergan, specifically that is the textured implant.

Mike Papantonio:             And you’re involved in litigation on this case. Tell me about the litigation that’s taken place. Is it a class?

Mike Papantonio:             And get something filed. So the, the, one of the big problems with the breast implant, the first round with the breast implant, was not only that the doctors didn’t, didn’t tell that they wouldn’t tell the patients, but the industry had an all out kind of program to make women feel comfortable with it. They failed to tell women that there’s a process without any type of implant where they can rebuild the, the breast with natural tissue. That was never discussed. They would say, doctors can’t do that. Well, you shouldn’t do that. And it was a big push by the industry to say, this is the quick answer, right?

Mike Papantonio:             What, what should someone do if they have implants? What should they be looking at right now?

Mike Papantonio:             Are they having hair loss? The first round hair loss was a big problem.

Mike Papantonio:             Yeah. Well, what was happening, the hair loss was caused by the auto-immune reaction. And one, one sign, people would come into my office, I could look at exactly the same symptoms, they were startling. Black under the eyes, hair falling out, diminished weight. It was, it was, and this went on Steve for, this went on for more than five years when nobody did anything about it. So good for you. Keep it up. Good luck on this project. Okay.

Mike Papantonio:             Dr. Janet Woodcock, oh boy, this is a great story. Well, she’s been placed in charge of the FDA on an interim basis, but she could end up being the permanent pick and that is terrifying. What, it’s like nobody, it’s like, we forgot what she’s, what her history is. Pick it up from there.

Farron Cousins:                  Janet Woodcock has been kind of kicking around in and out of the FDA for, you know, 20 to 30 years at this point. But all the way back in the Obama administration is when she really started to kind of get involved in FDA decision processes on behalf of the big pharmaceutical companies. One of the incidences back in 2011, she testified before Congress and went and said, listen, you’ve passed a law saying we can’t have these financial ties, but oh, now I can’t find anybody willing to serve on committees and I need, I need these people from the drug industry to come in and be a part of the FDA. And she convinced the director of the FB, FDA to go and say the same thing and of course they got their way. Big pharma came back into the FDA during the Obama years because of Janet Woodcock.

Mike Papantonio:             Oh, let me just tell you, there was a prosperous time for pharma during the Obama years and, and you would, you would have thought that Trump would have tapped down on that, but he didn’t. They continued to grow.

Mike Papantonio:             The story I think of is eteplirsen, eteplirsen was a drug that was for muscular dystrophy. Everybody at the FDA said, do not allow this drug on the market. Make sure you do not let, her advisors told her that, her in-house scientists told her that, the people who had studied the drug study said don’t allow it, but she allowed it because she’s in so much love with the pharmaceutical industry, that she was afraid that Sarepta, that was the, that was the company that was manufacturing. She was afraid it was going to adversely affect them financially. So she did what nobody else has ever done. There’s, that her advisors said, there’s no efficacy to this product. It doesn’t work. It’s unnecessary. It’s going to hurt these people even more with muscular dystrophy, don’t do it. And she makes, has private meetings has private meetings with Sarepta. We don’t know what took place in the meetings, but the next thing we know, she’s letting it on the market. This is who Biden wants to head the FDA.

Farron Cousins:                  Right. And again, just to point this out, everybody else in that agency told her, they said, look, Dr. Woodcock, this drug is pointless. It’s useless, it’s dangerous. It’s going to kill people and it doesn’t help anybody. This is a bad drug. We’re not going to do it. And she said, well, I’m going to make you do it anyway. I’m going to go talk to Sarepta. We’re going to make this happen. This drug’s going on the market and that is exactly what happened. And that’s, people have to understand, like that’s a lot of power for her to have, because she was not the head of the FDA by any stretch of the imagination.