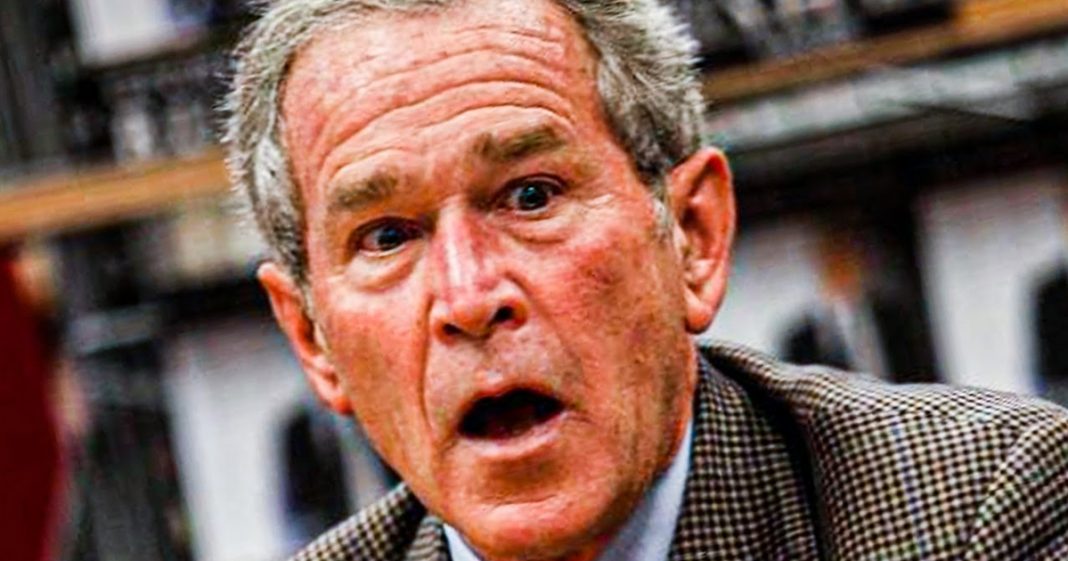 According to a new report from Reuters, dozens of former Bush administration officials have left the Republican Party, saying that it is now just a cult of Trumpists. They aren’t wrong about that, but it is shocking that these people were fine with torture, unjust wars based on lies, and the atrocities at home that occurred while they were in office. Why leave the Party now and not then? Ring of Fire’s Farron Cousins discusses this.

Great news, everybody. Dozens of former Bush administration officials have announced that they are leaving the Republican party. They simply cannot put up with what the Republican party has become, which is what they describe as a cult of Trump. It is the party of Trump and they’re 100% right about that. These former Bush administration officials who were totally cool with all the war crimes that, that Bush perpetrated, you know, how he had his own attorney general draft up a memo saying, no, it’s totally cool if America tortures now, violating all kinds of international treaties and agreements. Uh, yeah, that was fine with them. The horrid response by the Bush administration to hurricane Katrina, you know, thousands of people die. Totally okay with that. Totally okay with the, you’re doing a heck of a job brownie, with Michael Brown at FEMA handling the Katrina response. No problem with that.

No problem with all of the voter suppression that we saw during the Bush years. Totally fine with that. No problem with the recession that he caused. No problems with the multiple tax cuts for the wealthy, the pushing of trickle-down economics, even though they knew it was a lie. Nope, those were all okay. They draw the line, however, at insurrection. That’s just too much for them. We can’t have that. We can’t have it on our soil. It’s okay if we go and overthrow somebody else’s government based on lies, totally no problem with that. Like we’re, we’re okay with that. We know we did it. You know, oops, our bad. They have no problem with that, but, you know, when it’s here at home, you know, it’s a little different when you can look out your front door and see a government being overthrown, eh, it kind of makes you feel icky. To hell with these people. Like this report from Reuters is absolutely trying to put a positive face on some of the most grizzly ghouls of the 21st century, who suddenly didn’t develop a conscience by the way, they just realized it’s bad for their brand.

That’s what this is about. They don’t care. They don’t actually care about what the party does or what the party stands for, or who the party represents now, if it’s the crazy conspiracy theorists, or if it’s just moderate austerity Republicans, that doesn’t matter to them. What matters to them is what can they get out of it? And they much like the Lincoln Project realize, hey, I think there’s money to be made in this, I’ve found a new me party, because that’s what this is. And do you know where these individuals are going to go much like the Lincoln Project? Yeah. They’re going to come over to the left and they’re going to turn the left into the new right. Don’t welcome these people, don’t whitewash what these individuals did. Same thing with the Lincoln Project. They are not our friends. They’re a group of parasites looking for a new host.

And they think that that new host would be the Democratic party and they want to come over here and suck the life out of it, just like they did with the Republican party. And then when they’ve left that husk, that shell, they’ll move on to whatever’s next. That’s what they did with the Republican party. These parasites came in and they sucked it dry until we were left with something unrecognizable and disgusting. And now they’re moving on to their new host, the Democratic party. Do not welcome these people into the left, do not consider them allies. They’re opportunistic parasites, and they need to be treated as such.