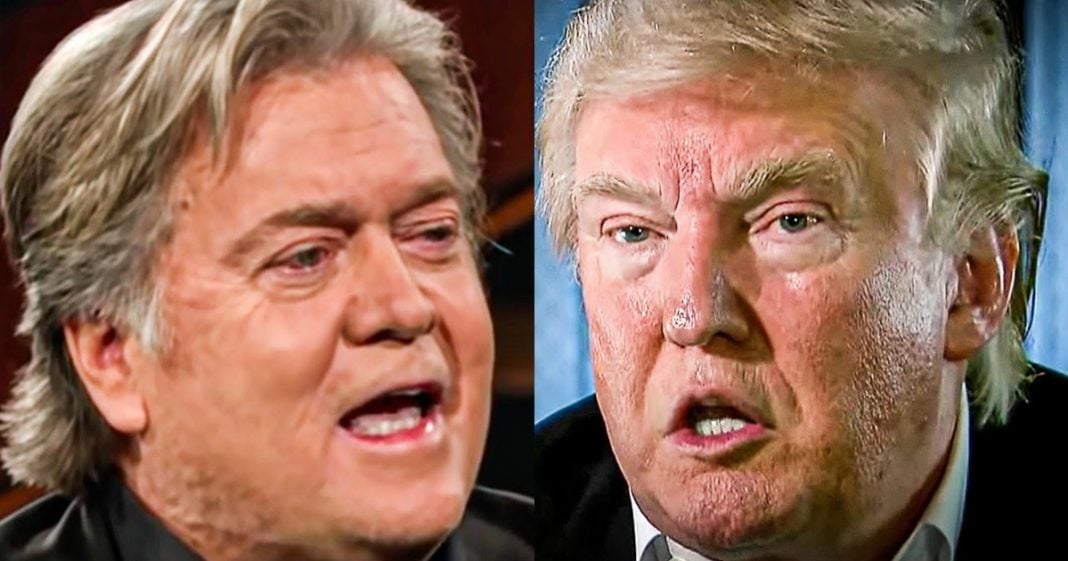 Former Trump strategist Steve Bannon believes that Trump’s entire legal team walking out on him could end up being a good thing, as he believes that the former President should represent himself at the hearing. Either Bannon’s brain is filled with lard, or he is out to make Trump look like a fool, because this is the dumbest plan in the history of Congress. Ring of Fire’s Farron Cousins explains what’s happening.

So over the weekend, all five of Donald Trump’s impeachment lawyers said I’m out, I’m done, not doing this and that’s really bad for the president because he had struggled tremendously to find anyone even willing to act as his impeachment lawyer, the trial is coming up next week and he has nobody. And then, even funnier than that, Steve Bannon, you know, the guy Trump pardoned for essentially stealing money from a charity that was supposed to go to build the wall. Uh, Steve Bannon came out and he said that Trump should just represent himself. He should be the one to go to the Senate floor and act as his own lawyer because quote, he’s the only one who can sell it.

That’s his exact quote. He’s the only one who can sell it. Steve Bannon knows nothing of law, nothing. That’s why it’s such a shame that Donald Trump pardoned him. Man, this guy would have gone to jail for a long time if that’s his, you know, legal mentality. He’s the only one who can sell it? Do you not know what lawyers do? It’s not about being a sales person at all, at all. It’s about presenting facts. You’re not selling, you’re, you’re convincing and yeah, Donald Trump’s a hell of a salesman. He’s gotten all kinds of people all over the country to invest in horrible things that ended up causing them to lose tons of money. He’s still facing lawsuits over that, Steve. But that’s not what a, what a trial is. This is the dumbest, the dumbest piece of advice I have ever seen a strategist give another human being and we have seen some doozies over the years here at ring of fire. Right? Donald Trump right now has essentially nothing to worry about with the impeachment trial, nothing to worry about.

We already know there’s not enough Republicans willing to jump ship and vote with the Democrats to convict him, none. But if this man goes down there and represents himself, all that’s going to do is make his chances of getting convicted worse. People don’t like him. Not to mention the fact we’re going to watch this on TV. We all are. We don’t want to, but we kind of have too, this is must see TV. And if the public is out there and this man that they haven’t had to see, they haven’t had to hear from, they haven’t had to read his tweets for a couple of weeks now, suddenly he’s back. And he’s just as grotesque, just as flippant and just as arrogant as he ever was. What does that do to the public? It reminds them of how much better it is to not have him around. To not have his followers around. Putting Trump on the floor of that Senate would be driving that final nail into the coffin of the Republican party. And so I will end by saying this, I agree with Steve Bannon and Donald Trump should absolutely represent himself at the impeachment trial.