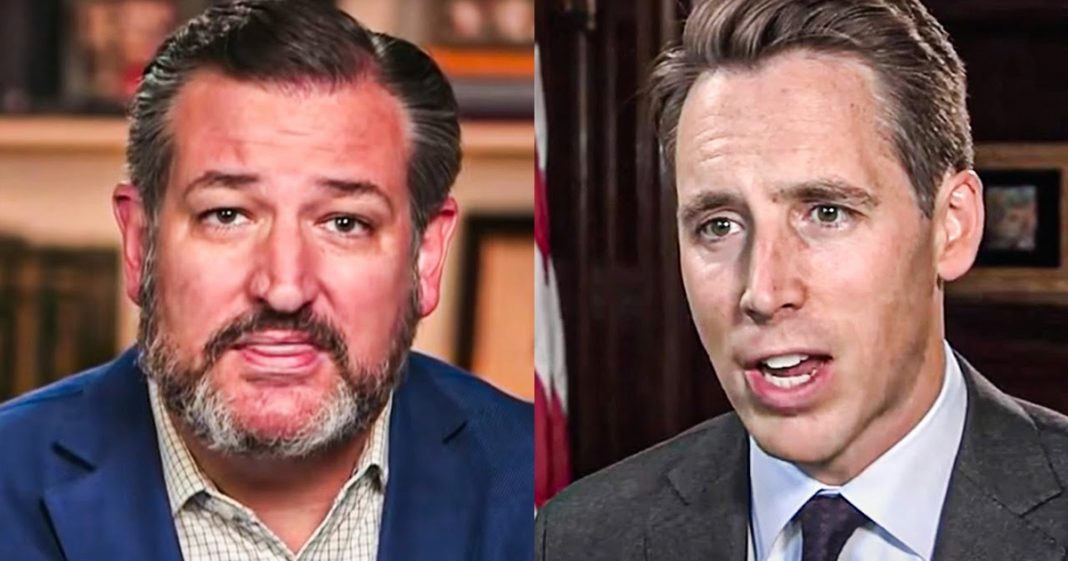 The fates of Senators Josh Hawley and Ted Cruz now rest with the Senate Ethics Committee, and they will be meeting behind closed doors to determine the fate of the two men. The likelihood of either man facing any real consequences is extremely low, but that doesn’t mean that we should all just give up. There has to be accountability of some form, and that’s the goal here. Ring of Fire’s Farron Cousins discusses this.

The Senate ethics committee is now going to be the body that is going to decide the fate of Republican senators, Josh Hawley and Ted Cruz. And as Politico writes, not a whole heck of a lot is known about what happens behind the closed doors of the Senate ethics committee. They write about it as if it’s some kind of secret cabal that we’re not even supposed to know exists. You know, they put on their robes and they cover their faces and there’s lots of candles and incantations, you know, that’s, that’s almost the picture they paint in this ridiculously unnecessarily long political article, that just tells us that, hey, the Senate ethics committee is taking up the complaints against Hawley and Cruz, which is the main thesis here. They’re taking it up. We’re not going to know what happens until of course the Senate ethics committee issues any kind of ruling on that. So here are the options before us, censure or nothing. That is, is what we’re looking at. They’re either going to be censured, which means nothing or nothing is going to happen.

I mean, sure. I guess they could possibly be stripped of their leadership positions, but the Republicans would have to do that and the Republicans are not going to do that. I’d be surprised if you can even get the votes to get a censure on these two guys. Now, having said that again, I fully endorse this ethics committee looking into the claims against both Hawley and Cruz, which is by the way that they both help to incite the actions that took place on January 6th at the Capitol. Where I have always said I have a problem with this is the fact that Democrats did make it personal. They only went for those two. Tuberville was also one of the people who voted to not certify certain electoral college States. In fact there were, I think, what a total of like eight senators, but you only picked these two and that could be because obviously Cruz gave a speech to one, he offered his legal services to Donald Trump saying, I’ll go before the Supreme Court and argue your case if you want me to boss. Hawley, of course gave the fist, but you cannot argue that those things are incitement.

So I don’t, I don’t really know. All we do know is that unfortunately not a whole heck of a lot is going to happen from the ethics committee and, and that’s mainly because the ethics committee doesn’t have a whole heck of a lot of power. The ethics committee cannot kick these two men out of the Senate. In order to do that, you would have to take it to a, you know, full chamber two-third majority vote, you know, just like with impeachment. So you got to have 67 senators willing to say yes, Cruz and Hawley two Republicans, you got to go. That would never, ever, ever happen. You literally have a better chance of convicting Donald Trump in an impeachment trial than you would have of expelling Cruz and Hawley. A censure vote, I do believe that is simple majority, so that could happen. But again, the censoring is just a formal admonishment that we don’t like what you did. It means nothing. It doesn’t strip them of any of their power. Again, the party itself, the Republican party in the Senate, the Democratic party in the Senate y’all choose who goes, where.

You choose, who gets to be on what committee. So that power would always lie with the party. So the Democrats can vote to censure, but they can’t vote to kick them out of these committees. So there’s another problem. Again, I support it. I think we need to have, you know, thorough, thorough talks and discussions and even investigations into what these men did. I do not like the fact that it is behind closed doors. I think the public needs to be aware of this. I think the public needs to be aware of everything that’s happening in DC. But it is what it is. I can’t change the rules. I’m not up there and my two senators are Marco Rubio and Rick Scott. So I don’t think they’re going to be taking my phone calls to ask them if they could do something about this. So we wait and see, the fate of these men’s careers rests in the hands of these secretive Senate ethics committee, and it’ll only be a matter of time before we find out which non-action they’re going to take against them.