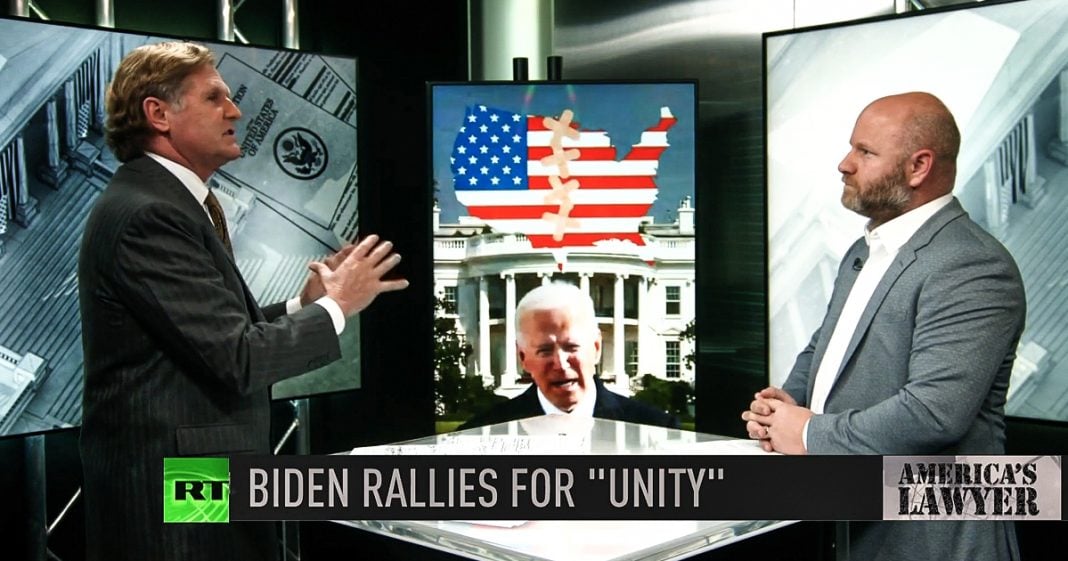 Via America’s Lawyer: While President Biden is espousing “unity” as his rally call toward a deeply-divided electorate, people across the political spectrum are questioning whether his administration will actually bring Americans together. Mike Papantonio & Farron Cousins discuss more.

Mike Papantonio:             Joe Biden gave a great speech about unity during his inauguration last week, but the public wants results, not feel good talking points. You know, as this thing goes on, what, what is your, what is your take on what’s happening with that administration?

Farron Cousins:                  You know, I mean, okay, what are we, we’re exactly a week in at this point. We’ve seen some positives. You know, just Tuesday morning, he came out with the executive order reducing the military surplus equipment going to police officers. So that’s a good first step. He’s been pretty good with COVID so far with his executive orders, the mask mandates, trying to reopen schools in a hundred days. That to me is not feasible at all. We’re not there yet, but he’s, he’s got such a low bar and I think that’s part of the problem just because Trump was so bad, we can’t just accept the bear minimum from him.

Mike Papantonio:             Well, that’s part of it, isn’t it? You got liberals who said, look, all we had to do was beat Trump. That’s all, that’s it. Now you can pack the cabinet with whatever disgusting Wall Streeters you want. You can ignore your promise about climate change. You can keep us in a war in, in Yemen. You can turn up the war in Syria. We don’t care because, because Trump is gone, here’s the danger. If they don’t, if they don’t pay attention these first two years, they don’t solve the vaccine problem. They spend time going after Trump for, you know, for trying to impeach him.

Mike Papantonio:             What a waste of time. Here’s what they’ve got. They could confirm, they could confirm new appointments to the, to the board. They can, they can confirm new judges, which Obama failed to do and Trump didn’t. They can, they can really focus on climate change. Most Progressive’s the only thing they really adored where it came to real policy with this guy was climate change.

Mike Papantonio:             So he needs to pay attention to that. And so the, the, the whole point is this, if they squander this time, if they squander this time, doing stuff they should not be paying attention to. That this I hate Trump thing, if it obsesses them to the point to where they avoid policy, they’re really going to hurt themselves these first two years. Look, can I tell you something in my personal opinion, if all he does, if all Biden does is makes major inroads into climate change, he’s done a, it’s a legacy for him.

Mike Papantonio:             It’s a, an important legacy for Joe Biden, and he’ll be remembered as a truly great president. That was his big talking point. If he, if he gets away from it, he’s in trouble. If you look at the appointments he’s making on the, you know, to the cabinet, it’s pretty scary.

Farron Cousins:                  Right. I mean, most of the people he’s putting in there, not anybody to ever feel optimistic about and, and, you know, with the impeachment trial, that, that is something that is definitely happening. Now, I don’t necessarily disagree with it. You can’t drag it out, I think more than a week, then you’re really going to hurt yourself on that. But if, you’re right, if he can get the handle on the vaccines, because that is major and he inherited a horrid mess with that.

Farron Cousins:                  You’ve got to get people inoculated. You get people back to work. But then pay attention to the polls. We have gone what, 20 years now with presidents saying, well, I don’t look at polls.