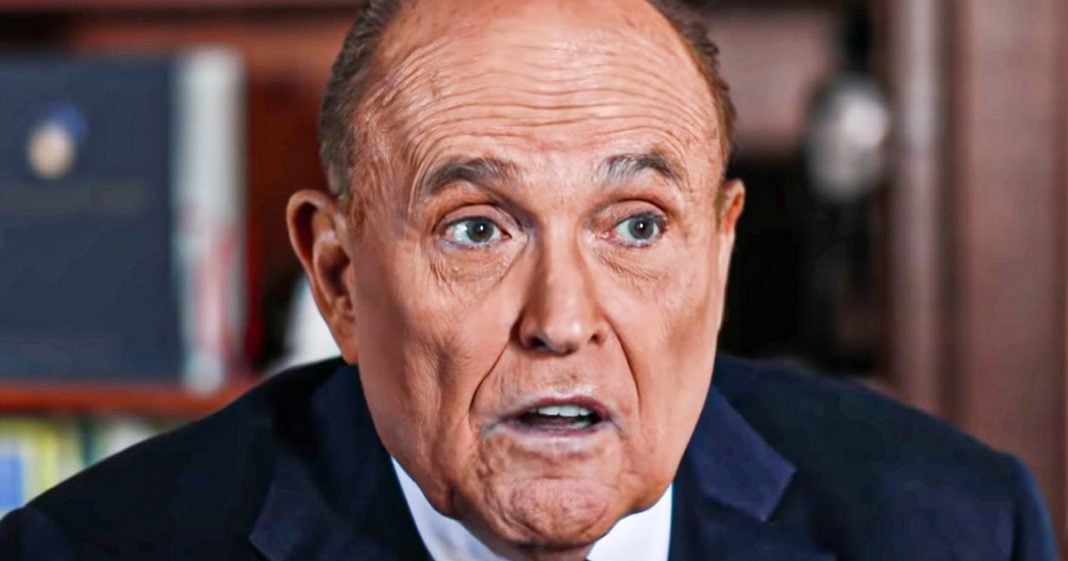 The Lincoln Project has warned Rudy Giuliani that he has until Wednesday to fully and completely retract his statement that the group was involved in the January 6th siege of the Capitol or else they are going to hit him with a major defamation lawsuit. Even though the group admits that the lawsuit would be tough to win, they want to make sure that Giuliani starts to feel some heat over his constant lies. Ring of Fire’s Farron Cousins discusses this.

At the beginning of last week, Rudy Giuliani was hit with a $1.3 billion defamation lawsuit from Dominion Voting Systems. And to start off this week, Giuliani is once again being threatened by an organization to be hit with a massive defamation lawsuit, because the man is apparently incapable of going out there and ever telling the truth. This new group that is threatening to sue Giuliani for defamation is none other than the Lincoln Project, because Giuliani recently claimed that it was in fact, the Lincoln Project that apparently stormed the Capitol on January 6th. Yes. The Lincoln Project, in Giuliani’s twisted little mind, showed up there with their Trump flags and their horned-helmets and did, did the thing. Here’s, what’s ridiculous about this, we know that that’s not the case. We also know that all the Republicans out there saying, no, it was secretly Antifa. No, no, we know who it was. We know the individuals, they’re all being rounded up and arrested and none of them got pardoned.

And one of the main reasons we know who they are is because they all posted their stuff online and then we looked through the rest of their digital footprint and saw that, wow. Yeah, these are all like hardcore for many, many, many years, Trump supporters. Unless of course, you’re trying to paint them as some kind of, you know, deep cover, they’ve been planning this thing for like five years throughout the entirety of the Trump administration, eh, not a thing that happened. They’re all Trump people and Giuliani wanted to divert the attention away because she doesn’t want his buddy to go to jail. Even though Giuliani, you got nothing out of this relationship. And I think that’s, what’s most important here. Giuliani got nothing from Donald Trump, as far as we know, the last update we had, Trump hadn’t even paid Giuliani for his legal work. You know, so, so you didn’t even get paid for the work that you did at the end of that campaign.

You didn’t get your pardon that you desperately thought you were going to get. You got nothing and yet you’re still out there putting your own reputation and now your own financial security at stake, trying to push these lies for the former president. Like Trump can’t do anything for you now, buddy and Trump sure as hell isn’t going to do anything for you now. The Lincoln Project has given Giuliani till February 3rd, Wednesday to fully and completely and publicly retract his statements that they were somehow involved in the siege of the Capitol. And if he does not retract his statement, they are in fact going to sue him for defamation. That is typically how these defamation lawsuits work. Problem though for the Lincoln Project is that obviously they are a public figure, so the threshold to prove defamation is ridiculously high. They would also, I believe have to be able to prove that they have already lost money as a result of Giuliani’s claims.

So I don’t know if that’s something that’s going to happen. They even admitted by the way, that this lawsuit is a long shot, but it is still necessary. Keep in mind, as I have repeatedly said, I don’t like the Lincoln Project, can’t stand them. Their tactics are wonderful because they’re all a bunch of Republicans, but they seek to move the Democratic party to the right and anyone who seeks to do that, I don’t like you and I’m not going to be an ally to you at all. I can admire your tactics and I could wish that my groups would adopt those same tactics because they’re smart and they work. But you personally, you’re responsible for some of the worst policies this country has ever seen and I don’t trust you as far as I could throw you. And I got a bad shoulder, so I couldn’t tell you very far at all.

So that’s what we’re dealing with right now. But again, I do support the lawsuit a hundred percent. Giuliani needs to understand, and the rest of the Republicans need to understand, you can’t go out there and just say crazy crap whenever you feel like it. You can’t just make stuff up and not ever get held accountable for it. I think if anything, we need to loosen the defamation laws in this country a little bit. I think that might bring a little bit more honesty to the media. If you Know you can get away with saying whatever you want, you’re going to go ahead and say whatever you want. If you know that that threat of a lawsuit is always looming behind your back, you’re going to be a little bit more careful with what you say. Now we shouldn’t all constantly have to live in fear, but we also should be able to trust the press and the only way to do that, unfortunately in this country, is through the threat of a lawsuit.