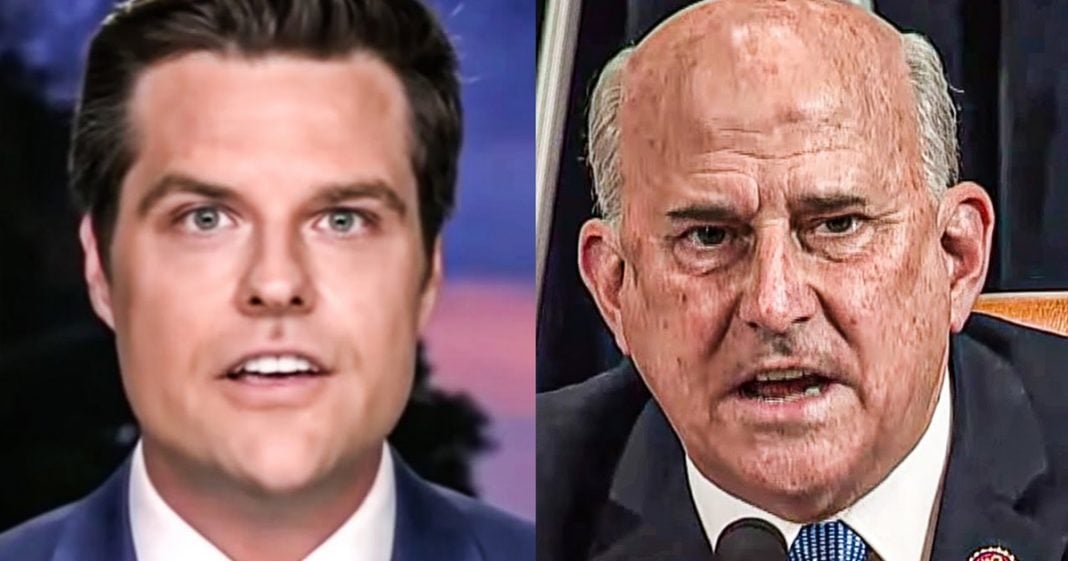 Two factions within the Republican Party are fighting for dominance right now, and the lunatics are winning by a lot. The Gaetz’s, Jordan’s, and Gohmert’s are the ones making the rules now, as they are the ones with the biggest reach and the ones being amplified by right wing media. The slightly more level-headed members of the Party are being ignored and ridiculed by the others, causing the void to be filled by the nuts. Ring of Fire’s Farron Cousins explains what’s happening.

While the Republican party is still trying to fight about what they’re going to be, probably for the next two years, maybe for the next four years, this is a fight we have discussed at length multiple times. I’ve talked about it before the election, talked about it after the election, but I just wanted to give an update right now because unfortunately it appears that the lunatics are winning. The lunatics, of course, being people like Matt Gaetz and Jim Jordan and Louie Gohmert and your Josh Hawley’s and your Ted Cruz’s and of course your Rand Paul’s, those individuals are winning the day within the Republican party. Meanwhile, your people in the Republican party who aren’t necessarily lunatics, their politics are just crap, people like Mitt Romney and, you know, your Murkowski’s, nobody cares. Nobody cares. So the lunatics are winning. The question is why? Is it because their tactics are better? Meh, to a degree.

But the big reason is because those are the ones that these conservative media outlets and conservative media people in general, those are the ones that they elevate. You know, you don’t see Mitt Romney going on Fox news a lot. You don’t see him going on Newsmax, but you do see Jim Jordan, you do see Matt Gaetz all the time. You see Gohmert on there. You have your Ted Cruz’s and yes, your Hawley’s. Josh Hawley has gone on national media on Fox news multiple times to talk about how he’s being silenced this week. Like, dude, you’re, you’re out in front of an audience of 3 million yelling about how nobody can hear you. That’s crazy and what’s even crazier is that there’s 3 million people watching at home or like, yeah, he’s silenced and he has no audience at all. Nobody gets to hear this except me and everybody else watching this show. It’s crazy and that’s what the Republican party has chosen to be.

So what’s the end result of that? Well the end result of that is that people are leaving the party. People are leaving the Republican party in droves, tens of thousands of people over the last three weeks have switched their voter registration from Republican to anything else. Not always going Democrat. Most of them just going independent or no party affiliation, but they’re saying I don’t want to be a part of this. And it really did get kick-started after the January 6th insurrection that took place, but they’re leaving. So while this internal struggle is happening within the Republican party and the lunatics are winning, the public is looking at this and they’re saying, I’m not doing that. This is not what I signed up for. I just wanted tax cuts and deregulation, not insurrection and insanity. We got to open their eyes, by the way, about why deregulation is bad and why tax cuts don’t ever work. We can do that. We’ve been doing it for many, many years, tune in, you might learn something, but the public is disgusted. So if the Republican party wants to keep limping along, they’ve got to get the lunatics in check. Otherwise they’re going to find out that the inmates have taken over the asylum, but all the voters have already left the party.